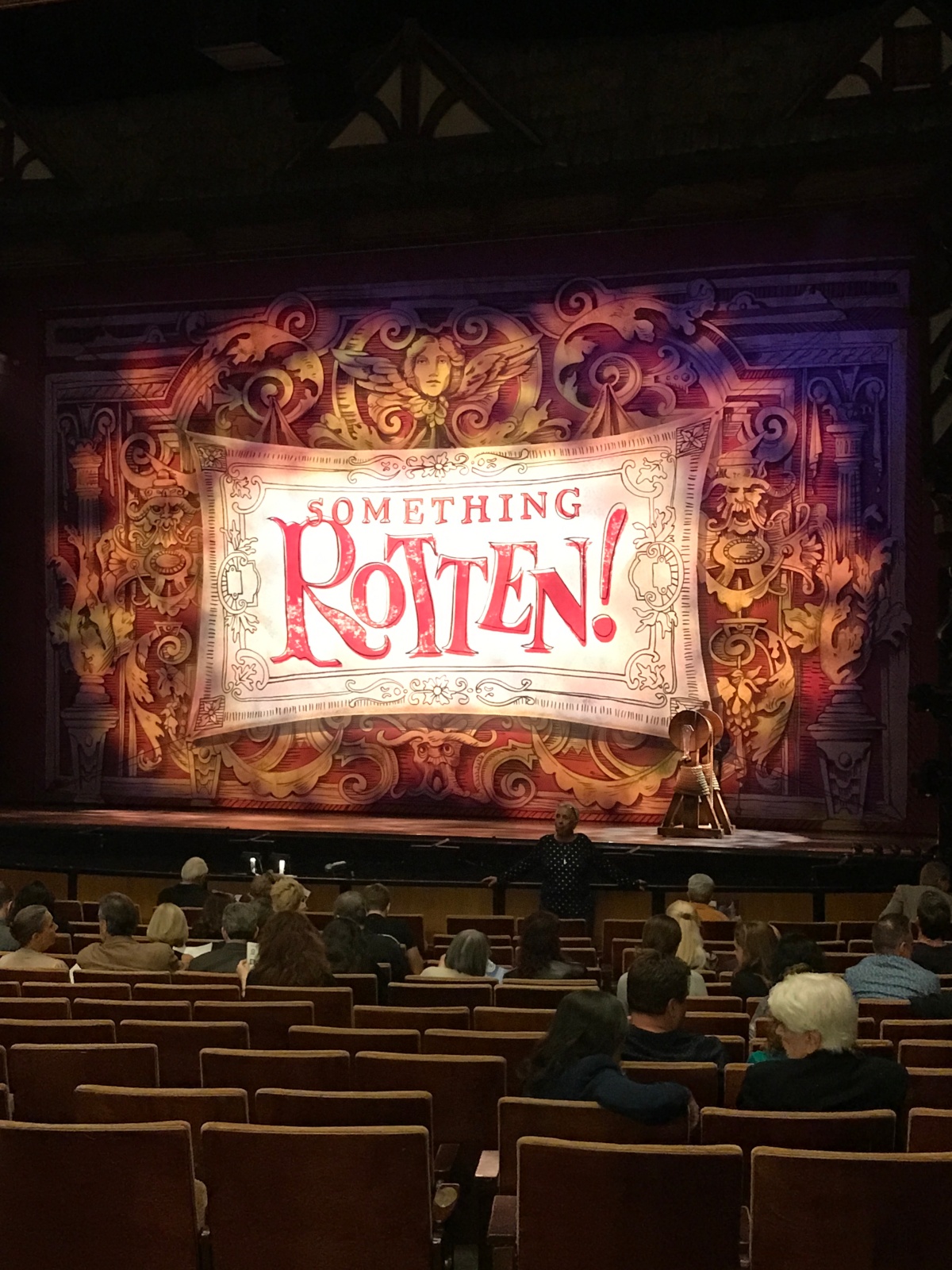 We learn that “Shakespeare is hotter than hot, and any other writer is not,” during Act One of Something Rotten! Especially in “God, I Hate Shakespeare,” with the line “Don’t be a penis, the man is a genius,” as we meet the Bottom brothers stuck in the shadow of Renaissance rockstar Will Shakespeare.

Nominated for 10 Tony Awards in 2015, including Best Musical, “Something Rotten!” just arrived in Los Angeles with three of the Broadway stars Rob McClure as Nick Bottom (also the name of the character in Shakespeare’s A Midsummer Night’s Dream providing comic relief throughout the play), Josh Grisetti as Nigel Bottom and Adam Pascal playing Shakespeare with a Billy Idol-esque flair. Wait, is this the Adam Pascal who played the dreamy Roger Davis in RENT on Broadway and in the 2005 movie? YES!

During the standing ovation at the end of the show (the night before Thanksgiving), Pascal sang RENT’s Glory and brought down the house. All for a good cause to raise needed funds for Broadway Cares/Equity Fights AIDS.

Directed and choreographed by Tony Award winner Casey Nicholaw (“The Book of Mormon,” and “Aladdin”), this musical is set in 1595 with Nick Rashad Burroughs opening the show as the energetic Minstrel singing “Welcome to the Renaissance” with a talented ensemble in puffy pants, leather boots, beards that look like swallow tails, exaggerated petticoats and large codpieces created by Costume Designer Gregg Barnes. The award-winning design team of Broadway, Scott Pask creates a Tudor style set with lighting designer Jeff Crofter enhancing the stage.

Shakespeare knows how to “write a bitchin’ play” and Nick hates everything about him. “Shakespeare is a problem – a giant sun that shines so bright that no other sun is seen.”
A fun song, “Right Hand Man” introduces Nick’s wife played by Maggie Lakis. It’s a reverse of Shakespeare plays were men perform women’s roles. She is a women’s libber who wants to dress as a man to help out the household and earn some income. “This is the ’90s (1590s). We’ve got a woman on the throne,” Bea tells the Bottom brothers.

Shakespeare is everything Nick ever dreamed to be. Desperate, he takes the family money box and goes into the mystic underworld to seek direction. We meet Nostradamus played by the hilarious Blake Hammond, who looks into the future and forecasts that “musicals will be the most spectacular thing in theatre.” He sees that the plot advances through song and audiences will sit in “cushy gold seats with a roof over their head.” The audience laugh when Nostradamus projects “that much for a glass of wine?”

Nostradamus predicts “a musical will have just two acts and involve singing, dancing and acting at the same time. With this lead, Nick, an idea man, sets out to have his brother Nigel, a poet, help write the world’s very first musical.

Watching the number “A Musical” is the reason why people go to musicals, to tap their feet and rise out of their seats for a standing ovation in the middle of Act One. The actors onstage were surprised by the adoration. As the audience settled back into their seats and the theatre became quiet again, Nick offered his next line, “You really think that will work?” The audience applauded and laughed even louder.

The plot thickens when brother Nigel falls head over heels in love with Portia, a Puritan and daughter of Brother Jeremiah, played by a very funny and slightly affeminine Scott Cote. Portia sings with such a girly, sweet voice that it reminded me of a young Kristin Chenoweth in Wicked.

Tongue and cheek lines include when Nigel pulls his sonnets out of his codpiece to recite to Portia. Nigel and Portia are similar to Romeo and Juliet, especially when her fathers banishes her from ever seeing the handsome poet again.

When the brothers have a falling out, Nick teams up with Shylock the theatre producer.

After another visit with Nostradamus, Nick follows his lead to write Omelette: The Musical, that includes a danish and some ham.

Musical fans will recognize the melodic and choreography references to over 20 beloved shows from “Music Man, West Side Story and Les Misérables,” especially in the second-act number “Make an Omelette.”

Unfortunately, I didn’t feel Act Two was as strong, as Act One. It was slow at times and the dancing Omelette musical was just too silly.

Strong rock-style musical numbers include “Will Power” and “Hard to Be Bard,” as Pascal struts the stage with rock style back up dancers and entourage of swooning fans.
Shakespeare disguises himself as a new York actor, and becomes a literary thief stealing Nigel’s soulful prose, and turning his beautiful sonnets into one of his most popular tragedies, Hamlet.

During “To Thine Own Self” Shakespeare saves this cast of characters from being killed and helps them sail over to The New World – America. While in the Land of Opportunity, they finally write Nigel’s musical about two orphan boys who succeed.

Looking for something fun to do now until New Year’s Eve, Something Rotten will have you leave the theatre laughing and smiling all the way home.

This review was also featured in The Stage Review – https://thestagereview.net/2017/11/26/guest-review-something-rotten-ahmanson-theatre/