When Plan Check closed on Fairfax Avenue, I was eager to see what would open in its place. Located down the street from Jon & Vinny’s, Supreme and Canter’s Deli, Black Star Burger has become one of the trendiest food and clothing destinations in Los Angeles.

The very first Black Star Burger opened in Moscow in 2016 and became so successful that 20 locations opened across Eastern Europe.

For the grand opening of its first American location, Black Star Burger partnered with Jason “Poo Bear” Boyd, a songwriter, American record producer and singer who co-wrote many of Justin Bieber’s hit songs. When he hosted the grand opening in November, celebrities Justin and Hailey Bieber and “Dancing with the Stars’” Val Chmerkovskiy attended the party to support their friend. Also attending the opening was one of the founders of Black Star Burger and Russian rapper Timati.

Since there are a lot of burger restaurants in Los Angeles, I hoped Black Star Burger would offer something different than all the other casual burger chains. Last weekend, I brought my daughter to join.

A large menu screen at the entrance of the restaurant lists four beef, two chicken and two vegan burgers, side dishes, a kids menu, drinks and desserts.

The burgers can be made the “L.A. Way” with a lettuce wrap instead of a gluten bun.

The hemp-seed burger piqued my interest, so I ordered it with a side of sweet potato waffle fries. My daughter ordered a grilled Beyond Meat burger the “L.A. Way” with a side of fried “Cali” flowers and a beverage. 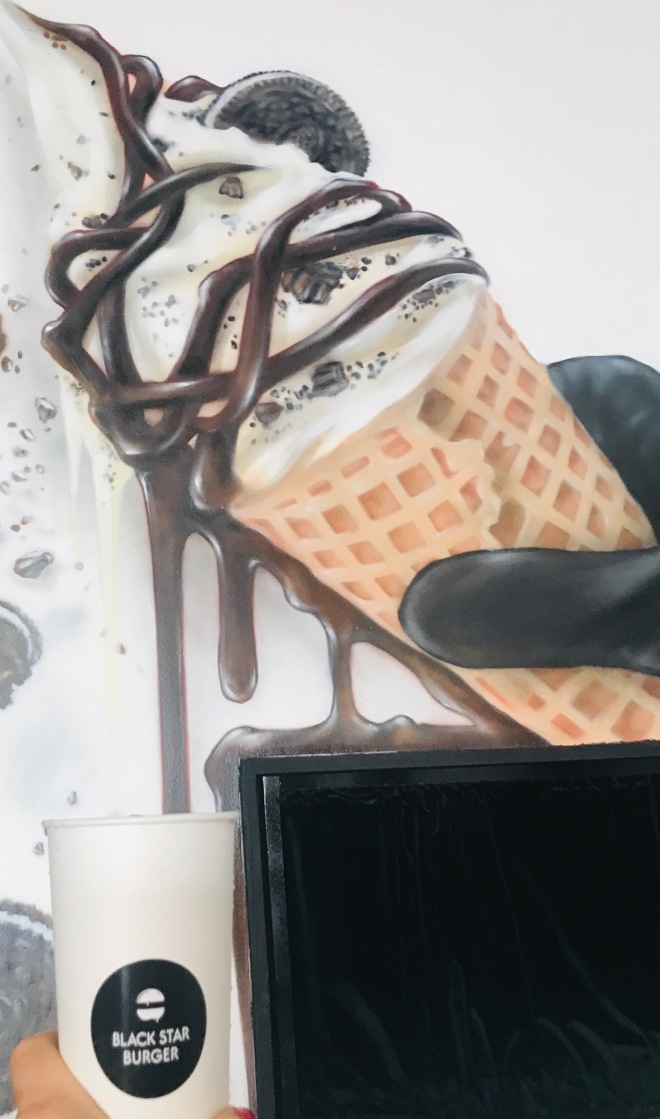 With booths along the wall and tables in the center, the dining room features an ice cream counter with a long bar with stools. Guests can try an array of beer on tap that includes Peroni, Blue Moon, 805 and a New England-style hazy IPA.

Within a few minutes, my name was called to pick up our food. On the tray were a pair of food-grade, latex-free black gloves in a clear, sealed package.

My daughter appreciated the gloves while biting into her juicy “L.A. Way” Beyond Meat burger wrapped in lettuce. The theory of these gloves is that you use less napkins while eating.

The sweet potato waffle fries were served warm and crispy, and the small “Cali” flowers were delicious. Both were served without dipping sauces.

The Black Star chicken breast sandwiches can be fried or grilled. One is slathered with spicy mayo, pickles and slaw, and the other is enhanced with a house ranch dressing, tomatoes, mixed greens and pickles.

On the kids menu, younger guests can choose from a cheeseburger or grilled American cheese combo. Both come with potato wedges and a drink. For dessert, the ice cream counter offers different flavors and 10 candy toppings for customized sundaes.

At Black Star Burger, you can enjoy a gourmet burger and beer in a fun environment for a quick meal, or hang out and listen to the music. You never know who might come in to support their friends in the music industry. Open daily from 11 a.m. to 10 p.m.