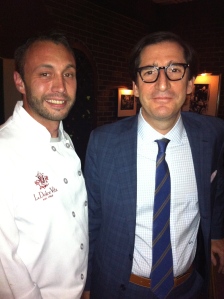 Alessandro Uzielli recently gave the iconic La Dolce Vita in Beverly Hills a nip and tuck. The popular hot spot’s interior was looking a little tired, so with the help of architect Christopher King, the Italian restaurant on Little Santa Monica looks fresh.

Uzielli is the son of Gianni Uzielli, a restaurateur who owned four Italian restaurants in New York throughout the late 70s and 80s. At the age of 12, he would frequent some of the hottest restaurants and nightclubs in New York City with his father.

I was invited to see the renovated La Dolce Vita last month, and was greeted by Christopher King who led me into the new lounge area. He told me that Alessandro wanted to keep the old-school Italian feel in the windowless restaurant. King’s first task was removing the dated acoustic ceiling and replacing it with white copper panels.

They also removed the pink-hued granite bar and replaced it with a custom pre-patina brass top that looks weathered and not too shiny, giving the room a bit of character. A French vanilla colored padded leather front with lights underneath gives the bar depth and enhances the visual interest when one walks into the restaurant.

“Alessandro didn’t want to make drastic changes. We decided to make subtle changes to maintain our loyal customers, yet attract a newer crowd too,” King said.

When they removed the dated looking mirrors running along the back dining room wall, they found wine racks behind them. King framed the racks and now they hold all of the restaurant’s wine collection.

Comfortable leather booths dominate the dining area. King and Alessandro decided to keep the faux copper patina iron details throughout the restaurant, yet plated it with brass accents.

As we ventured into the dining room for dinner, Alessandro sat next to me and shared how he acquired the restaurant.

“Years ago, a friend and I walked into La Dolce Vita for a drink and noticed it was empty,” he said. “I asked a busboy ‘what’s going on?’ and was told the restaurant was closing the next day.”

The following day, he called the landlord, leased the spot, and bought the restaurant – keeping the staff employed. One of the employees was celebrity maître d’ Ruben Castro. He and Frank Sinatra were friends for years, since Sinatra frequented the restaurant twice a week until his death in 1998.

“Ruben retired last October after 40 years working here,” Alessandro said. “Ruben served most of the Rat Pack and many past presidents.”

The grand opening was in June 2003. Since then, the menu has been updated by the new Executive Chef Matthew Underwood, but not completely redone. “We kept the sand dabs on the menu for Nancy Reagan and other regulars,” he said. Finding Underwood is a bit of a Cinderella story. “He was hired as a salad chef, yet when our Executive Chef left, Underwood emailed me to see if he could participate in the interview and taste-test process. Of all the chefs who wanted the job, Matt was by far the best,” Alessandro said.

We enjoyed Underwood’s butternut squash Agnolotti with a brown butter sage sauce and walnuts. Agnolotti is ravioli typical of the Piedmont region of 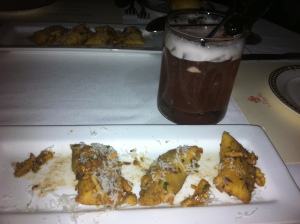 Italy. A pasta sheet is folded over butternut squash stuffing and pinched to create little pillows with the perfect ratio of pasta to stuffing. The built-in flap catches the luscious sauce.

His Caesar salad is infused with garlic, lemon juice and cheese to give it a zip with each bite. Next, we all enjoyed the shrimp Fra Diavolo – which means “brother devil” or spicy in Italian. Served with angel hair pasta, these shrimps pack a slight kick of heat.

Be sure not to skip the dolci at La Dolce Vita – it’s the perfect ending to your meal.

Appealing to the new cocktail culture, the restaurant has added a drink menu with a Hollywood flair. Instead of a Moscow Mule, they make a mighty good “Sunset Mule.” Italian and California wines dominate the wine menu.