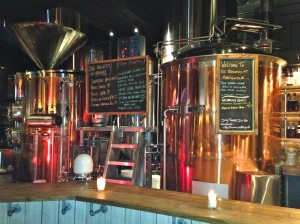 Hermosa Beach is known as a party destination with a vibrant surfer bar scene, however it’s gaining a more sophisticated culinary reputation with its newer upscale restaurants.

We drove to the beach one recent Sunday afternoon to experience Abigaile restaurant, before seeing Jay Leno perform at the Hermosa Beach Comedy and Magic Club.

Abigaile is a working brewery with copper beer fermenters and tanks. Our server, Christy explained to us the different craft beers that brewmaster Brain Brewer has developed for the social house. When we told her we needed to leave by 6:45 p.m. to see Leno’s show, she efficiently brought out all of our dishes so we had time to walk two blocks to make the opening act.

Brewer, yes it is really the brewmaster’s last name, is passionate about the authenticity of his microbrewery. We felt the best way to experience his various beers was by ordering a flight of five beers to enjoy with the creative tapas featured on Executive Chef Tin Vuong and Chef de Cuisine Ken Johnson’s menu.

The flight arrived from lightest to darkest with an explanation of how each batch was made.

His Tangerine Honey Wit is the lightest colored Belgian-style beer made with malted white flaked wheat, fresh tangerines, ginger, and orange blossom honey. It offered a

hint of citrus notes with a dry finish and went well with the fresh burrata served on grilled walnut bread. This reminded us of a savory and sweet flatbread with sliced Bing cherries, pickled onions, baby spinach and a dash of fig balsamic.

Admiring the dining area, we noticed some guests were sitting in church pews. Others sat below a shrine of lit candles paying homage to the space when it was once a Baptist church.

We sat at the wall of windows overlooking the Pacific Ocean. Our circular table was made of distressed metal and we sat in wood Captain-style chairs. Eclectic silverware in various patterns rest on cloth napkins.

Two large flat screen televisions and a long bar with stools give part of the room a little bit of a sports bar vibe.

While listening to the 80s and 90s music playing in the background, I asked Christy to share with us the story of the nearby graffiti wall.

“It was done by Fletcher Dragge, one of the founding members of Pennywise,” she said. We discovered he worked with a crew of tattoo artists from 3rd St. Tattoo to reflect the South Bay punk culture.

In the early 80s, this space became a combined living and rehearsal space for several of the most influential punk/hardcore bands in music history, including Black Flagg.

Next, we tasted the Death of Glory IPA made with Centennial hops. It offered a fuller body and nice backbone with a floral finish. This beer paired nicely with the kale salad topped with sweet and meaty roasted Medjool dates wrapped with prosciutto, goat cheese and almonds with a sprinkling of pomegranate seeds.

My husband enjoyed the darker Misfit XIPA with a hint of tropical flavors. It has two pounds of Amarillo hops per barrel and a slightly lower alcohol content. This went nicely with the patty melt topped with caramelized onions, smoked Fiscalini cheese and sweet and savory whiskey pickles. It was one of the best cheeseburgers we’ve tasted. The burger was served with crisp fries and two different dipping sauces.

The second to the darkest beer, The Bee’s Knees is made from 80 pounds of Orange Blossom honey. You can smell the honey when you sniff the glass, however, you don’t taste it. Instead there is the essence of vanilla and spicy notes.

We enjoyed this beer with the tuna tartare with picholine olives, diced pears, a hint of pine nuts and a splash of ginger vinaigrette. The fried lotus root chips were a little too thin and broke when we tried to scoop up the tuna tartare, yet the lace-like chip was pretty.

We finished our evening with the last sip of the darkest beer, Coconut Imperial Red while enjoying a housemade Snickers bar with peanut butter cream and seasonal French toast bread pudding with chocolate ice cream. The Coconut Imperial Red is almost as thick as a Guinness beer and made with ample malt with Chinook and Cascade hops. Brewer toasted over 20 lbs. of coconut to create this unique caramel and coconut ale.

This article was published in the January 30, 2014 issue of the Beverly Press and Park La Brea News.