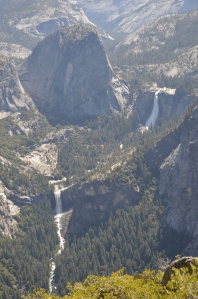 Ansel Adams once said “Yosemite Valley, to me, is always a sunrise, a glitter of green and golden wonder in a vast edifice of stone and space.”

Driving through Yosemite Valley offers views of mountains with meadows, waterfalls, and spectacular geology that produces awe-inspiring moments. Many of the recognizable vistas were captured on film from Ansel Adams.

Yosemite became a National Park in 1890. The Valley is 7-miles and 4000 ft. above sea level. There are 77 mammal species and 223 bird species throughout the park.

It costs $20 per vehicle to drive into Yosemite Park. The pass is good for 7 days. Save your receipt, because you need to show it when you leave the park.

Since it is at least a five-hour journey from Los Angeles, stay in the valley at least two nights. Depending on price, you can camp, stay in a cabin, lodge or at the Ahwahnee Hotel.

Once you pass the long tunnel and stop for pictures at the breathtaking view site of Yosemite Valley, El Capitan, Bridalveil Falls, and Half Dome. Continue driving into the valley and park your car. You will never need to get into your car again. A environment-friendly shuttle system takes guests throughout the park on a loop of 18 different stops that includes the Yosemite Lodge at the Falls area, Curry Village, Yosemite Village, Sentinel Bridge, Mirror Lake trailhead, the stables and Four Mile trailhead.

Bicycles are available to rent at Curry Village and Yosemite Lodge. There are 13 miles of paved surface to ride around the valley without navigating automobiles or buses.

If you can splurge, stay at least one night at the Ahwahnee. Driving past the stone gatehouse with an unpretentious Ahwahnee sign, one feels as if they are stepping back in time. Built in 1927, this elegant hotel has welcomed Queen Elizabeth II, Walt Disney, Charlie Chaplin, Gertrude Stein, Ansel Adams, Lucille Ball, Will Rogers, Dwight D. Eisenhower, John F. Kennedy, and Ronald Reagan while visiting Yosemite Valley.

Walking down the long porte cochere and stepping into the reception area one notices the geometric patterns paying homage to California Native Americans.

What looks like wood siding with stone accents is actually concrete poured into rough-sewn wood. Hotels in Yosemite burned down to the ground, so the architect and builder wanted to make this 123 guest room masterpiece fireproof.

A small pool set among the trees was built in the 60s. The staff keeps it heated to compensate for not having a hot whirlpool.

In the main lounge during the late afternoon, a high tea is set up with black or herbal tea in China cups with saucers and gourmet cookies for guests staying at the hotel.

The dining room has a 34-foot high ceiling with massive windows and stone columns. The food is good, but not spectacular. During Christmas they put on an annual Bracebridge Dinner. It’s a three house seven-course dinner filled with drama and symbolism with over 100 singers and dining room employees for 350 guests.

While in Yosemite take a photography class to learn how to capture the landscape from an expert at The Ansel Adams Gallery. Several classes are offered each week.

At night attend “Starry Skies Over Yosemite Valley” to learn about stars, constellations, planets, meteors and other sky features.

Stroll with a park ranger to learn about waterfalls, bears, geology and the trees.

Children and grandchildren can become a Junior Ranger or Yosemite Little Cub at the Happy Isle Nature Center.

Another interesting spot is the Yosemite Museum to learn about the Indian Cultural Exhibit and the Yosemite Miwok and Paiute people from 1850 to the present.

This article was published in the July 2014 issue of Not Born Yesterday.