“As a young boy, I dreamed of becoming a magician,” said actor, director, writer, producer and comedian Jason Alexander, 54. The majority of NBY readers will fondly remember Alexander as George Costanza in the mega-successful television show Seinfeld. Alexander practiced his craft starting at the age of six and perform magic shows for family and friends until he was 13 years old.When his family moved to Livingston, New Jersey, the shy Alexander was welcomed by the theater kids at school. “They were friendly, supportive and quick to include me in the group,” he remembers good memories associated with being part of the theater community. To Alexander, the theater was like a big magic show. “Nothing is real in theater, it was the best magic trick. I didn’t have to saw an assistant in half or pull any rabbits out of a hat.”
From then on, he was a thespian throughout high school and college. He enrolled at BU (Boston University) and completed three years before getting a call to perform on Broadway. His acting career started in 1981 and he married in 1982.

Over the years, Jason Alexander has acquired other interests, such as poker and philanthropy. He competed on televised poker shows and in various tournaments. He has appeared twice on Bravo’s Celebrity Poker Showdown, winning the final table of the 8th season. Alexander won the $500,000 prize for his charity, The United Way of America to help benefit the New Orleans area. An avid poker player, Alexander was also one of the “famous faces” as a result of being a regular player on the online poker website Hollywood Poker.

Alexander played in the 2007 and 2009 World Series of Poker main event. He also signed with PokerStars where he plays under the screen name “J Alexander”.

Since his memorable role in the television series, Seinfeld, Alexander has been working constantly. Roles on stage, television and movies have allowed him to sing, 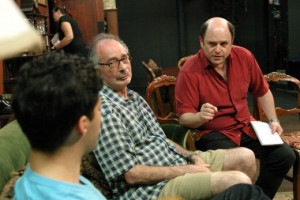 dance, act, write and totally immerse himself in the art.

Currently, Jason Alexander is directing Neil Simon’s hilarious and heartwarming semi-autobiographical play Broadway Bound at The Odyssey Theatre in West Los Angeles. This production is very special to him, because in 1986, Alexander starred in the production of Broadway Bound in New York City.

Now as the director, he feels as if he is a magician creating magic up on stage five shows a week. The opportunity came about when he went to see his dear friend, actress Gina Hecht perform in the 2013 La Mirada Theatre production of Broadway Bound. Hecht asked Alexander for advice after her performance. She wanted to know what he thought of the show and what needed improvement.

As he shared with her his experience about performing in Broadway Bound on Broadway, Hecht asked if he might consider directing the performance in the future. He replied “If the timing is right, yes, I would take a crack at it.” Hecht immediately talked to her other cast members at the La Mirada show including the legendary actor/professor/director Allan Miller and Ian Alda. Miller had the assistant director at the Odyssey Theatre come see the La Mirada production. When they got the “green light” Miller, Hecht and Alda agreed to star in the show with Alexander directing the production. 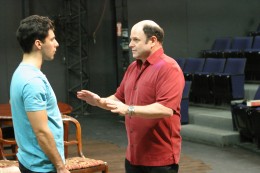 Mr. Alexander has bonded with the cast and has enjoyed the interactions, specifically mentioning Allan Miller. The 85 year old actor lives in a suburb in Los Angeles and I was able to talk with him, as well.

This is Miller’s third time starring in Broadway Bound. Miller and Alexander hit it off immediately and work well with each other.

“I have had 8 terrific Directors in my extensive acting career,” said Miller. “Jason Alexander is now my 9th favorite Director. He is passionate, enthusiastic and offers wonderful ideas to enhance the show.”
Miller explained that with Alexander’s direction, “Broadway Bound goes deep into the painfully perceptive life of Neil Simon.” Miller finished the interview with, “I have some of the best one-liners in the show.”

This is not the first time Jason Alexander has directed a show. He had the opportunity to direct three Seinfeld episodes. He also has directed the successful television shows – Mike & Milly and Everybody Hates Chris.

Alexander is captivated by the challenges and rewards of directing and is eager to direct more projects.

This article was featured in the September 2014 issue of Not Born Yesterday. 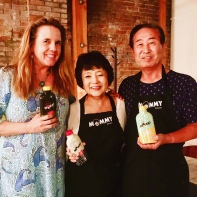