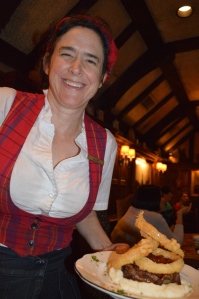 In 1952, my father returned from the Korean War and his family took him to Tam O’Shanter on Los Feliz Blvd. for a celebratory meal. Located in his old stomping grounds, he fondly remembers the storybook tudor-design building filled with knick-knacks and good wholesome food.

Now in his 80s, I helped move my dad from Palm Springs to live closer to me and my family. One of his first requests was to have dinner at Tam O’Shanter.

As we walked into the restaurant, a hostess and the manager, Brian McNally warmly greeted us. When asked if this was our first visit to the historic restaurant in Los Angeles, my father told McNally his story as we were led to a table in the back.

McNally shared with us that Walt Disney used to dine a Tam O’Shanter on Sundays. He led us past Disney’s table and pointed out the brass plaque with Walt Disney’s name inscribed in the metal. John Wayne used to visit often too.

display plates, tea pots, figurines and goblets. On one wall was an oversized fireplace near an eclectic array of chairs surrounding square and circular tables.

Established in 1922 by the founders of Van de Kamp’s Holland Dutch Bakeries- Lawrence Frank and Walter Van de Kamp, this duo later created the popular Lawry’s restaurant chain. The men hired movie studio carpenters to build Tam O’Shanter and they named the restaurant after a beloved 1790 Robert Burns narrative poem that is a mixture of Scottish and English. It’s about Tam and his cronies drinking at a pub. Tam in the poem wears a bonnet, as do all the servers at Tam O’ Shanter.

The poem goes on to tell how Tam rides his mare through the countryside when lightning strikes, hence the new sign outside of the restaurant with a dramatic red lightning bolt. Also new at the restaurant is a revitalized menu by the newer

This talented chef was inspired to be a chef by his grandmother while living in Long Island New York. The rest of his training was in Las Vegas cooking with Emeril Lagasse and Alain Ducasse. He came to the Tam O’Shanter three years ago, after a stint at the swanky Pelican Hill Resort along the Newport Coast. He has been gradually adding new items to the beloved menu.

Since there are so many longtime regulars, Kalenderian keeps many of the signature dishes and guest favorites that include roasted Prime Rib with mashed potatoes and gravy, Yorkshire pudding, two different freshly prepared horseradish and either creamed spinach or corn.

As with Lawry’s, Tam O’Shanter has many long term employed staff members including Ricky the bartender for over 45 years. Sotero our busboy for 28 years and Diane our charming server 17 years.

Diane explained the menu to us while dressed in white knee high socks, a navy colored shirt, white blouse with a Scottish plaid vest and proper Tam resting on her head. She shared that the chocolate souffle takes up to 45 minutes to prepare and to let her know if we wanted one. We piped in “Yes” immediately.
Sotero brought us a basket with Swedish Limpa bread and white bread. The Swedish Limpa is a dark brown bread made with stout beer and an interesting combination of orange rind, fennel, caraway, and anise seeds. It’s served with a soft and creamy butter that is easy to spread onto the divine bread. 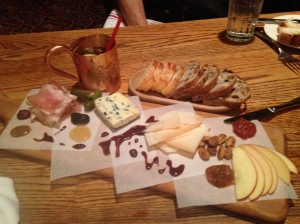 We decided to start our culinary adventure with a meat and cheese board that displayed freshly cut Honey Bee aged goat Gouda cheese and a St. Agur cheese with a slightly spicy finish. The meat we selected was a thinly sliced, sweet and salty Lonzino Kurobuta pork from a local purveyor, Angel’s Salumi & Truffles.

On the board were Marcona almonds dusted with cayenne pepper and cumin. There were pools of lavender honey, and three different types of mustards. Sliced apple, black garlic, cornishons, and a spoonful of fennel jam and a pear coriander jam enhanced the two different breads served with the board. 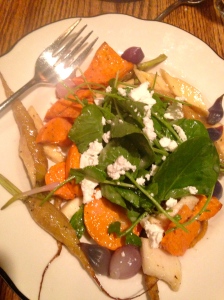 and a bowl of the sweet potato soup with a yam chutney on top.

Kalenderian likes to use fennel in some of his newer dishes and makes his own chutney. The entree I ordered offered a combination of both. My poached Scottish salmon was on a fennel puree with braised fennel bulbs and a lovely tomato and dill chutney. I added roasted Brussels spouts with bacon to the dish. It was a meal fit for a Scottish King or Queen.

My father was excited to try the classic meatloaf on top of mashed potatoes with a sweet tomato glaze and huge beer battered onion rings.

A large chocolate souffle arrived puffed up and ready to be pierced with a spoon and topped with some freshly whipped cream. With a slightly sweet egg flavor, we polished the warm cake quickly.

Upon leaving we noticed the demographics changed inside the restaurant. When we arrived at 7 p.m. the guests inside ranged from babies in carriers to seniors with canes. By the time we left, a talented four piece Irish/folk music band, Whiskey Sunday was performing near the entrance, and the crowd was more in their 20s to 40s with large parties gathering at tables to enjoy Kalenderian’s modernized menu.

Tam O’Shanter is open for lunch at the Ale and sandwich bar from 11 a.m. until the kitchen closes at 11 p.m. Dinner on Monday through Thursday is from 5 to 9 p.m. On Tuesdays Tam O’Shanter offers Trivia Night. There is no cost to participate. Winners receive a prize. On Fridays the restaurant stays open until 10 p.m. Saturday and Sunday the restaurant serves brunch from 10:30 a.m. to 2:30 p.m. and then reopens for dinner at 4 p.m.

The restaurant is wildly popular during the winter months as it decks the halls with festive decorations. Generations of families celebrate their holiday traditions at reserved tables inside the Tam O’Shanter. Call to make your reservation soon. $$$ 2980 Los Feliz Blvd. (323)664-0228.

Published in the Beverly Press and Park LaBrea News Nov.13, 2014.