As a young boy, Chef Steve Vernetti learned how to cook from watching his mother and reading Julia Child cookbooks. At the age of 8, he made a tray of éclairs while his parents went out for the afternoon. When they returned, the kitchen was a disaster with bowls and pots cluttering the countertops. However, when his parents tried Steve’s creative confection, they were so impressed and they encouraged him to continue cooking.

Before his father passed away, he told Steve that he was a talented chef and that he should open his own Italian restaurant and call it Vernetti.

In 2013, Steve and his wife Joanna bought the popular Larchmont Village restaurant Girasole and completely renovated the interior and kitchen. They worked closely with their architect and friend David Thompson, founder and principal at Assembledge+, to make the space their own.

“To own a restaurant right here in Larchmont Village, in the same neighborhood where we are raising our family, is pretty amazing,” Steve said. “Joanna worked closely with David on the restaurant’s design evoking a modernized European bistro interior.”

The tables, bar top and large mirror frames are made locally by Treeline Woodworks with white oak reclaimed wood. The restaurant’s large interior mirrors provide a space-expanding illusion for the 45-seat restaurant. 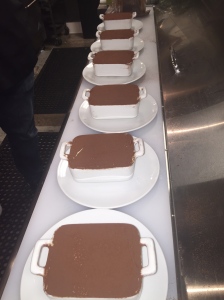 The night I dined at Vernetti with a friend, the dining room was loudly abuzz as guests were excited to try various dishes on the menu. Steve and Joanna were consummate hosts, floating to each table introducing themselves and answering any questions.

Vernetti’s salumi platter is comprised of flavorful prosciutto, porchetta, bresaola and a spicy calabrese salumi with a few pickled vegetables.

We also enjoyed the tasting plate of three of his pasta specialties. The first was a pappardelle with sautéed wild 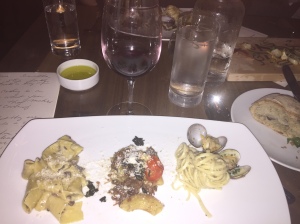 mushrooms, cream and parmigiano. The trio also included a rigatoni with a tender braised short rib ragú and a linguine with Manila clams, white wine, garlic and crushed red pepper.

An entrée of octopus is served with creamy white beans and a fennel and cabbage slaw.Chef Steve rests in wine corks before being grilled. The cork has natural enzymes that help tenderize the octopus.

Vernetti has applied for a beer and wine license that will hopefully be granted soon.

This review was also published in the June 25 edition of the Beverly Press and Park LaBrea Newspapers.