So a couple of nice Jewish boys from New York decide to open a sushi restaurant in Los Angeles … No, this is not an intro to a Jerry

Each guest is greeted by a shout of “Irasshaimase,” a standard sushi bar salutation meaning “welcome.” Guests can expect to hear it all night while sitting in the lively restaurant with a high ceiling, wood booths and beautiful walnut tables. Longer tables in the center of the restaurant are available for larger parties, and a dimly lit bar area toward the rear with a decorative brick wall is a popular meeting place. The Japanese decor offers neutral colors, with a splash of black to add form and definition. The geometric order lends a feeling of openness.

I sat near the sushi bar and noticed a distinguished, older Japanese man dressed in a faded lime green T-shirt standing next to a line of sushi chefs in traditional white uniforms. Each dish the chefs prepared was inspected by the gentleman before being delivered to guests. The gentleman was master sushi chef Toshi Ueki, from Kyoto, Japan, a celebrity in the sushi world.

After a trip to Japan, Bruce and Erik Bromberg opened their first Blue Ribbon Sushi Bar in New York City, in collaboration with Ueki. They next opened a second Blue Ribbon in the Cosmopolitan Hotel in Las Vegas, and now a third at The Grove.
Chef Ueki has fresh fish and other sushi delicacies from the Pacific and Atlantic oceans, and the Sea of Japan, flown in daily for the restaurants.

“Master Sushi Chef Toshi Ueki is the heart of the sushi bar,” said A.J. Chang, one of the managers. The team at the sushi bar are sushi chefs from Japan and Korea, as well as local chef Elijah Lehrer, from Santa Monica.

The night we dined at the Blue Ribbon Sushi Bar, managers from the New York and Las Vegas restaurants were present to ensure the restaurant ran smoothly. Owner and executive chef Erik Bromberg was in the kitchen.“Erik arrives before 10 a.m. every morning and doesn’t leave until after closing,” Chang said. “His work ethic is amazing and drives the whole team we hired here in Los Angeles. Erik is the soul of the kitchen.”

Erik and Bruce Bromberg grew up loving food. Their parents planned vacations around places to eat, so when they opened their first Blue Ribbon restaurant in downtown Manhattan in the early 1990s, the menu focused on their favorite dishes.

Randi Sakihara, the new general manager of The Grove location, recommended we order a few signature sushi and sashimi dishes for starters. We enjoyed the thinly sliced kanpachi amberjack served with a yuzu pepper and ponzu sauce. No need for soy sauce – this dish offered a pleasing citrus flavor. 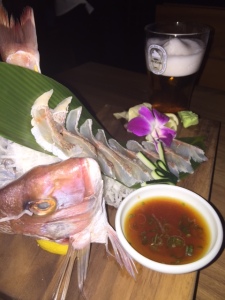 The marinated bigeye tuna served on an herbal and frilly shiso leaf is another great dish, and arrives with mizuna salad and crispy garlic chips. Mizuna is a Japanese water green that looks almost like a small maple leaf and offers a mild peppery flavor, similar to arugula. The green leaf was a melding of cool greens and tuna with a hint of spiciness and a crunch of texture from the garlic chips.

All the dishes pair nicely with sake. A variety is offered on the menu, including unfiltered and undiluted sake, and a Blue Ribbon sake flight. I opted for a frozen Kirin Ichiban draft beer. The entire beer isn’t frozen; just the foam on top. It keeps the beer cold for up to 30 minutes.

The most visually spectacular dish was the sashimi of cherry sea bream. The rose-colored body is stuffed with shredded white daikon radish, and the thinly sliced meat is arranged to resemble scales of a fish. It’s served with fruity yuzu dipping sauce and decorated with white and magenta pink orchids.

Next, we tried the more hearty fare with a Jewish twist, starting with a rich oxtail bone marrow dish cut lengthwise before being baked, sprinkled with sea salt and topped with teriyaki sauce and shaved bonito to add umami flavor. The rich oxtail is spread on wonderful grilled challah bread.

The fried chicken is very special. Don’t expect Southern fried chicken; these brothers are from New Jersey. It’s their secret recipe in which they roll chicken into dry matzo meal and fry it. The method locks in the chicken juice, keeping the meat moist. Served with the brothers’ slightly spicy wasabi and honey dipping sauce, it is unique and delicious.

Healthy fare includes the un-fried rice bowl, which resembled Korean bibimbap without kimchi. It’s served in a large bowl with warm brown rice topped with steamed julienne vegetables, scallions and a poached egg. I call it deconstructed un-fried rice, because every ingredient is placed separately on top of the rice and can be stirred together before eating.

Everyone knows that a blue ribbon is a first place award – the best of the best. At this Blue Ribbon restaurant, the owners and staff strive to please each customer, and in my opinion, they succeeded. The food and service is worthy of a blue ribbon in quality and taste, and is a satisfying dining experience. The restaurant opens for lunch at noon, seven days a week. Dinner is served until 10 p.m., Sunday through Thursday; and until 11 p.m., Friday and Saturday. $$-$$$ 189 The Grove Drive. (323)352-9300.

This article was featured in the Beverly Press and Park LaBrea News on August 20, 2015. This review is featured in GPSmyCity –  https://www.gpsmycity.com/gps-tour-guides/los-angeles-631.html