The famous Irish writer Bernard Shaw once said, “Those who wish to see heaven on earth should come to Dubrovnik.” That statement enticed us as we booked a cruise with Adriatic Tours to cruise on the Princess Aloha.

Boarding the 125 ft. luxury ship in Dubrovnik’s passenger harbor, we immediately noticed how new and clean it looked. The four-story ship has 18 staterooms with twin or double beds on the first two floors. Above the staterooms is a dining room, bar and outdoor dining area. The top floor is an upper sun deck offering great views of the area.

Our week-long cruise had only 29 passengers and six staff members. Since there were seven of us traveling together, we were directed to our cabins 8, 10, and 11. Cabin eight is one of the few triple cabins. The appointments were nice with fluffy duvets, carpeting and beautiful wood paneling. Bathrooms are a decent size with a large shower. Rooms offer a safe, intercom telephone, mini bar, and satellite LCD television. 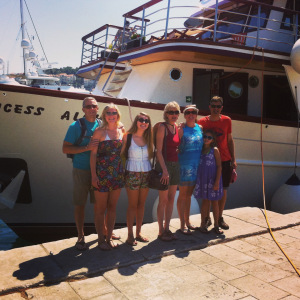 Our daily routine during the next eight days started with a buffet breakfast and eggs served to order. The fresh daily bread, fruit, cereals, yogurt, meat and cheese were fresh and plentiful. Next, we sailed to an island or secluded cove for a swim before a five-course sit down lunch either inside the dining area or outside in the covered salon.

Sailing to a new port after lunch, we walked on a tour through the city led by our cruise director, Martin, or a local guide. With a designated time to be back on board, we had a few minutes of free time before sailing to another medieval town.

Each night, we docked at a port and stayed overnight. After another walking tour, we were on our own to find a local Konoba, tavern or café for dinner. The engines fired up around 7 a.m. the next morning to sail away by breakfast the next day. It was quite an exciting and adventurous itinerary.

Throughout the cruise, we all became close with the crew and other passengers. We shared meals and with each other, swam together to isolated beaches, and read up on the sun deck.

After touring the old town of Dubrovnik, we started our cruise with a sail to a cove for a swim before visiting Mljet Island and

exploring its National Park with a saltwater lake and famous monastery.

The following morning we sailed away from Mljet to Brac Island and visited the charming town of Pucisca. We found a wonderful pizzeria right next to the boats in a harbor. Arriving back to the boat we were welcomed by an a’capella group.

The next morning we sailed away from Pucisca to the town of Omis. We swam and went for a walking tour. After lunch we sailed to Split to tour a Roman Palace, Cathedral and Jupiter Temple. We dined on our own at a café in the terrace of a Venetian style palace.

Day five we sailed from Split to the town of Bol on Brac Island. After another swim, we walked into Bol for a tour before sailing to the “St. Tropez” of Croatia, Hvar. In Hvar, we walked to the Franciscan monastery and had another swim. We found a charming Konuba in the old medieval town and walked along the plaza to watch all of the young revelers drinking, dancing and having a fun time.

On day six we sailed from Hvar to Korcula. In between we stopped twice for a swim off the back of the boat. We toured part of Marco Polo’s home and visited the historic St. Mark Cathedral before ordering three pizzas next to the waterfront.

On our last full day of sailing we entered the small town of Trstenik on the Pelljesac peninsula to tour Grgich winery with a wine tasting of their famous white and red wines. Wine maker Mike Grgich earned international respect when he gained international recognition at the Paris Wine Tasting of 1976 when his Chardonnay produced at Chateau Montelena won first prize among white wines.

Next, we sailed to another swim stop before cruising back to Dubrovnik. WIth still one more night onboard before our departure the following morning, we had enough time to walk along the top of the old city wall and enjoy the historical sights.

Cruising on a small ship is a more intimate way to see a multitude of Dalmatian Islands. Sailing near the coastline, one appreciates the vineyards planted from the sea to the top of a mountain, ancient cities and secluded coves with turquoise blue water.

To learn more about Princess Aloha, contact Kompas USA at predrag@kompas.net or http://www.kompas.net/cruises.php

This article was published in the September 2013 issue of NOT BORN YESTERDAY and Cruise with Jill.