Kieron Elliott is a dynamic Brand Ambassador for Macallan Highland Single Malt Scotch Whiskey. He has a delightful Scottish accent and wicked sense of humor. For 90 minutes, Elliott enlightened and educated us about five different Macallan spirits.

Here are 10 Things I learned about smelling, sipping and chewing whiskey –

1. The Macallan gives back to those in need. In 2010, they commissioned Lalique to make an exquisite decanter and filled it with Macallan’s 64-year-old single malt Scotch. It sold for $460,000 at auction. The Macallan donated all the money to Charity: water – a non-profit that digs wells and bringing clean, safe drinking water to people in developing countries. Another wonderful bottle of The Macallan sold to a collector in Taipei, Taiwan for over $628,000. Again, every penny was donated to charity.

3. Macallan 12-year-old Highland Single Malt Scotch Whiskey is not one to put your nose in the glass. Instead hold the glass under your chin to smell its glory. Color: The medium mahogany color is due to the Spanish-Sherry cask. Once you sip, take a bite and chew to break down the oils and alcohol. Taste: It has a bigger burn of alcohol. Flavor: Rich caramel and toffee flavors with a hint of raisins and cinnamon. This is the youngest whiskey we tasted.

4. All of Macallan’s whiskey is 100% natural color. There are no additives. 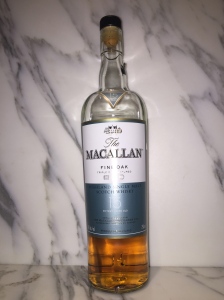 5. Macallan 15-year-old Highland Single Malt Scotch Whiskey is Triple Cask matured. It’s a marriage of two American Oak with a Spanish-Sherry cask. Color:  Lighter with a rich straw color. Taste: Once you get past the burn, it’s more elegant in the back. Flavor:  More citrus and vanilla in flavor and more similar to Bourbon with a whiter grain. This whiskey was softer on the nose and offered a warmer mouthfeel.

6. The Macallan Fine Oak Highland Single Malt Scotch Whiskey 17-year-old is matured in a unique complex combination of Bourbon and Sherry Oak casks. We were lucky to taste this bottle, because it is being discontinued. Within the next six months, it will be gone. It used to sell retail for $140 – $150 a bottle, now it’s $200 – $210. Ideal for collectors to buy. Taste: Oily, meaty and chewy. Color: Darker than the 15-year whiskey, because it stayed in the Sherry cask longer. Flavor: Citrus and vanilla, warmer, bigger and more robust. The 17 has a sweet spot.

7. When drinking whiskey, you should raise your glass and say – Slàinte mhath! Which in Scottish means: To good health!

8. The Macallan 18-year-old Highland Single Malt Scotch Whiskey matured in selected Sherry Oak Casks from Jerez, Spain. “This is the Rock Star of Whiskey,” said Elliott. It’s similar to the 12-year-old, yet the 18-year-old is very well known. Taking a sniff you get a lovely toffee. Flavor: Caramel with ginger notes. Color: Rich mahogany.  Taste: Smooth. It’s good to chew five times to break down the oils.

9. The Macallan Rare Cask Highland Single Malt Scotch Whiskey is made by Master Whiskey maker Bob Dalgarno who handpicks from less than 1% of the finest casks from 250,000 casks, to mature this whiskey. It’s the richest, rarest, and most exquisite whiskey profile. Color: Ruby hue. Flavor: Sweetness with a chocolate infused with orange. Taste: Easy on the mouthfeel.

This sells for $350 a bottle and pairs nicely with desserts. Wolfgang Puck Hotel Bel-Air pastry chefs made a lovely molten chocolate with gold flecks and apple tart Tatin to enjoy with this luscious whiskey. Another lovely dessert to pair with this whiskey is Sticky Toffee Pudding.

10. Kieron Elliott’s younger sister is also a whiskey aficionado. In fact, Joy is a Brand Ambassador for Macallan and one of the Top 10 Women in Whiskey. Also, according to her brother Kieron, “Executive Chef Thomas Keller is a big fan of my sister.”

Once you meet the entertaining Kieron Elliott and join him in a Macallan Tasting session, you will have a new appreciation of Scotch Whiskey and be a big fan of whiskey too.