Last month I was invited by Michelle Kim the Executive Director of the Hemophilia Foundation of Southern California, to be a judge in an Salsa Tasting contest. She needed three judges for a salsa challenge during their annual SoCal emPOWERment Forum in Burbank, CA.

Kim was given my name from a mutual friend, Brent Kuszyk. He told her that I was a restaurant critic and lived in town. When she contacted me with the offer, I was happy to volunteer and taste over 20 different types of homemade salsas.

While communicating with Kim, we learned that our older children graduated from the same high school and are now at the same college. What a small world!

A few days before the contest, Kim told me that there were 15 entries for spicy and 11 for mild. Over lunch one day with my dad, I panicked. What if the salsa was so spicy that it singed my taste buds and I couldn’t taste anymore?  I searched online for remedies to protect your palate while eating fiery hot food. Various posts recommended to bathe my tongue in milk or honey. Others said to eat bread if your mouth is on fire. How was I going to taste 15 spicy salsas? I’m a bit of a wimp when it comes to anything with jalapeños, Carolina Reaper (know to be one of the world’s hottest chile peppers) or a Caribbean Red Habanero (known to be twice as hot as a standard habanero chile and 80 times hotter than a jalapeño pepper) YIKES!

Michelle eased my worries two days before the tasting by assuring me that the Executive chef Moreno at Pickwick Gardens would also be a judge and would provide the provisions to cool the heat.

On February 20, I drove over to Pickwick Gardens in Burbank. It’s a beautiful wedding, party and meeting destination near the Equestrian Center. Walking inside one of the large rooms, the dazzling Michelle Kim gave me a hug. She is quite a dynamic and beautiful woman. Near her were the other two judges. One was Abel R. Ramirez, the proprietor of El Portal Restaurant in Pasadena. His restaurant serves Yucatan and Mexican cuisine and he is an expert on salsas. The other was Kyle a salsa aficionado.

We walked through the meeting room with tables offering information, products and services to help hemophiliacs and their families. There were representatives from Novo Nordisk, Baxalta, Bayer, Biogen, Genentech, CSL Behring, and Pfizer.

Next, Kim led us into the kitchen, and we saw the contestants jars of homemade salsa lined up on a stainless steel counter. There were light orange-colored salsas, bright red salsas and brick colored dips. Some were smooth as a gazpacho, while others were chunky and colorful

We didn’t have any chips to dip, just slices of bread. Kim did provide a half-gallon jug of milk, and a jar of honey. I kept those close to me at all times, just in case I needed one immediately. Before getting started, I poured milk into a plastic cup and dipped some bread into honey.

I thought it would be best to judge the mild salsas first. There were 9 jars with a number on a label. We did not know the names of the people who created these recipes, just a number. Here’s how we judged them –

Two were fiery hot and I quickly licked a spoonful of honey and ate a piece of bread, before washing it down with milk.

When I smelled number one, I handed it to the other two judges. We all made our remarks. Smells can be deceiving. What may not smell like much, many times offered a very pleasing taste. What looked colorful and chunky and smelled fresh, sometimes lacked flavor.

The puree salsas were good. If this was a cold gazpacho soup contest, these might have been winners.

We conferred with each other often while tallying up our scores to pick three winning salsas in the mild category. Many times we had a tie with two or three salsas and had to retaste them again. I really liked the fruity salsa with mango and papaya. It would be spectacular over a fresh piece of grilled Mahi-Mahi or swordfish.

As the Pickwick Kitchen started getting busy with preparation for the lunch at this all day conference, we were asked to move everything over to the dishwashing room to begin our spicy salsa tasting. There were 19 salsas in various colors, textures and temperatures.

Fortunately, there were only three that were fiery hot, yet my palate survived. My tongue did tingle, yet it wasn’t painful and almost pleasant. One was a mole tasting salsa with the essence of chocolate that would be an incredible sauce over chicken.

After the results were in, we debated which salsas would be given first, second and third place. We retasted a few multiple times and even offered tastes to the chefs in the kitchen, before we unanimously chose our winners. 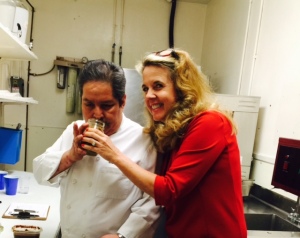 Kim collected our score cards and told us that people participating in the conference would also get to taste the salsas during the lunch break. She thanked us for taking the time to judge the contest.

The next day Kim emailed me and said, “I wish you could have seen the faces of the winners – they were so thrilled!” She ended with, “I hope your mouth isn’t on fire still!”

Judging a culinary contest was a lot of fun. I got to meet some very interesting people, taste some fabulous salsas and feel good about participating in an event that raises awareness and hope for hemophiliacs and their families. Would I do it again next year? You bet, sign me up.

If you know of another organization looking for a foodie to judge a contest, email me at weinlein@sbcglobal.net.