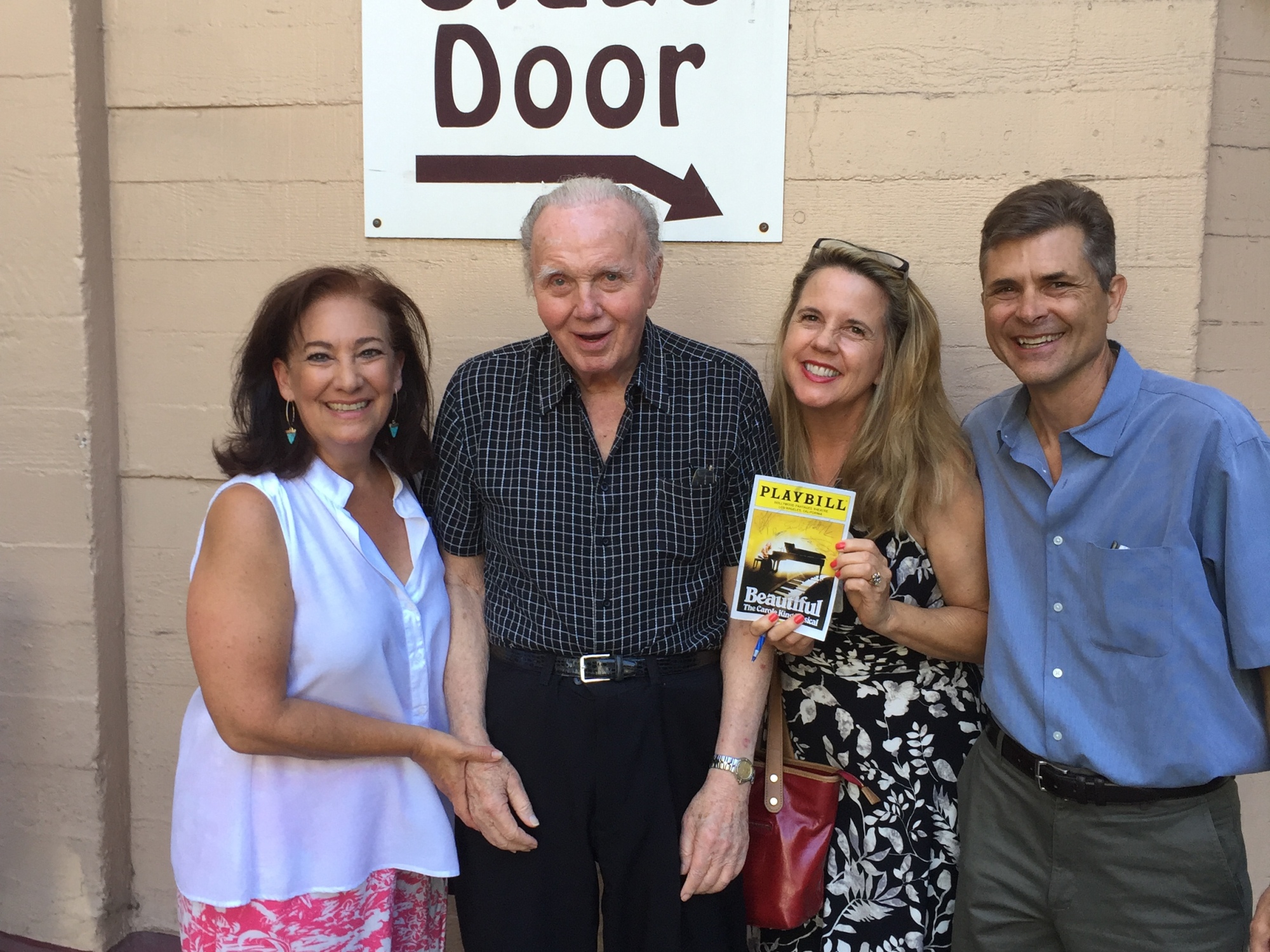 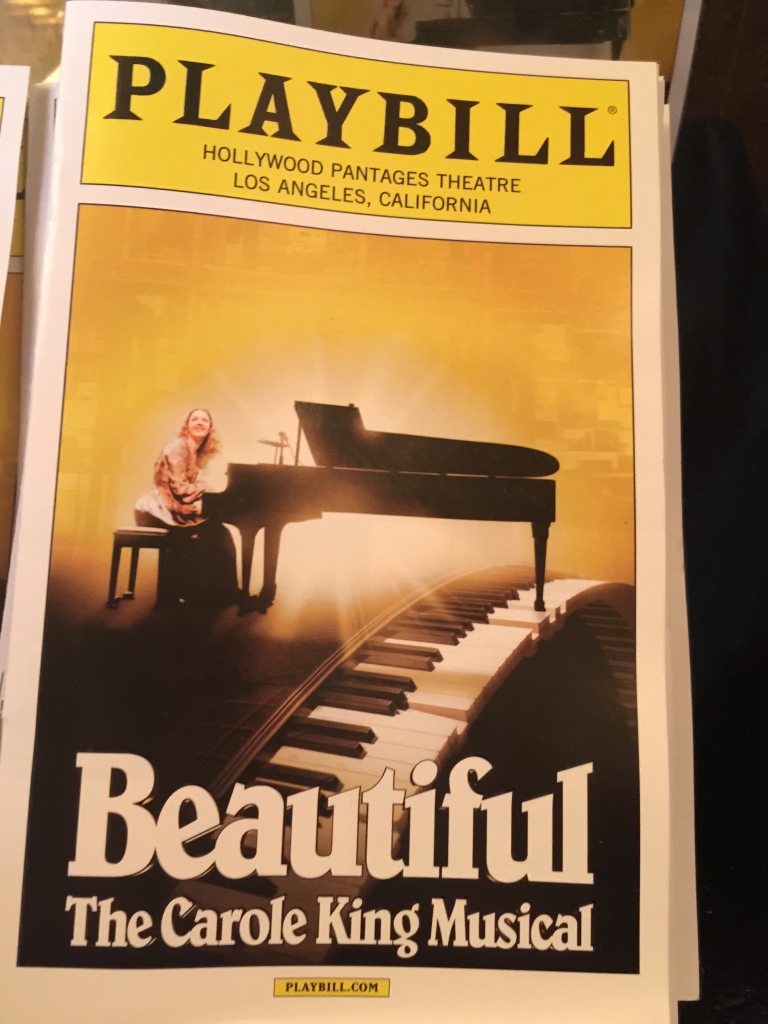 In two words I describe the current musical at the Pantages Theatre in Hollywood – Exquisitely Beautiful!

Sitting in row M in the 2700 seat Pantages Theater, actress Abby Mueller portrays songwriter and singer Carole King exquisitely to a sold out crowd. She walks out onto the stage and sits at a beautiful black grand piano, “Sometimes life doesn’t go in the direction you like, sometimes it’s beautiful.”

While playing the piano, she reminds King often that her father left her for another woman. Later in the show she gives King encouragement and strength to continue pursuing her dream, especially when Kings’ marriage fails.

King was very smart young woman, skipping two grades and attending Queens College before the age of 17. At college she meets his first husband Gerry Goffin, played by the handsome singer Liam Tobin. Together, the write “Will You Still Love Me Tomorrow” and other hits from a little record studio for music producer Don Kirshner, played at our performance by the likable Matt Faucher.

This is an era of singing groups that soared to the top of the charts. There were the Drifters, The Shirelles, The Righteous Brothers and Janelle. These groups had one lead singer and three backup singers. King and Goffins were successful in selling their songs to them. The actors and singers who perform in the show as theses groups were outstanding.

Lyricist Cynthia Weil is played by a young Kristin Chenoweth look and sound alike, Becky Gulsvig. She is adorable and funny onstage. Her boyfriend Barry Mann, played by Ben Fankhauser is a talented hypochondriac songwriter who adores Becky.
These two couples King and Goffin, Weil and Gulsvig compete to sell number one songs to Kirshner. Working in offices next to each other, they become friends, even though King and Goffin sell more songs.

We learn how each of King’s songs were written by the emotions felt by King and Goffin during their bi-polar marriage. When their marriage goes south, Carole’s mother Genie gives King a pep talk to help her daughter gain strength to continue to follow her dreams. When she moves on to Los Angeles, her record producer Don Kirshner introduces her to music producer Lou Adler. Eventually they make, sell and win a multitude of awards for her “Tapestry” album.

One of my favorite scenes is when Adler, played by John Michael Dias, encourages King to sing “A Natural Woman.”

Other characters worth noting are perky Ashley Blanchett playing babysitter Little Eva and nailing the song “The Locomotion” flawlessly.

Throughout the show, the audience hears the first few notes of a King song and it instantly is recognized. For many it brings back a “of-yeah” memory or moment.

Don’t rush out of your seat before the curtain call, because the end of the show is one of King’s top songs sung by the entire cast. Everyone in the audience rises to sing with the cast in a very “feel good” moment.

You will walk out of the show with a new appreciation of a Beautiful songwriter who writes from her heart.

This musical is only playing through July 17. There are still a few tickets available. Go to Hollywoodpantages.com (800)982-2787 or purchase your tickets at Ticketmaster.

After Los Angeles this show is traveling to Denver, San Diego and San Francisco. 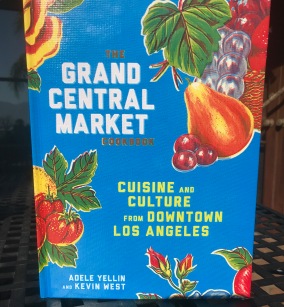 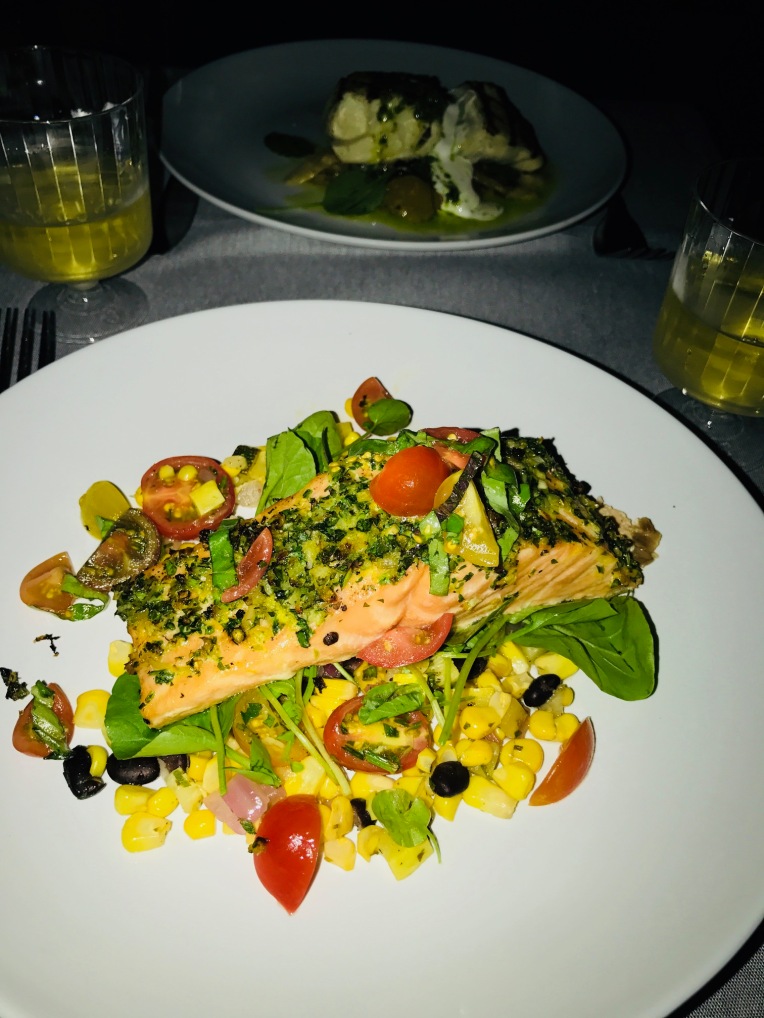