I was very moved today as we drove by Pepperdine University in Malibu. Cars were pulled over to the side and people were gathered on the massive lawn that is usually off-limits to visitors.

For September 11 Pepperdine honors all of the victims with full-sized flags lined in rows. The display commemorates the lives lost in the September 11, 2001 terror attacks. It’s the ninth year the University has united faculty, staff, students. Malibu residents and volunteers to create Waves of Flags installation and raise these flags.

There is a banner near some trees that states “Each flag snaps in the wind, rests in calm, or shines in the warm, bright sun stands as a witness and memorial of an individual who perished on September 11, 2001. As time passes and new beginnings soften painful memories, each year we remember the ones we lost and pay tribute to their lasting legacy.

What I found fascinating is that of the 2,977 flags, there are 90 that aren’t American flags. Did you know that 90 lives were lost to men and women from other countries abroad.

Doug Hurley, associate dean of students for Student Activities and Campus Recreation at Pepperdine stated, “This year Waves of Flags lands on the University’s day of service, Step Forward Day, creating a great opportunity for the Pepperdine community to come together and reflect on the events of 9/11.”

In addition to the Waves of Flags installation, the University installed a Heroes Garden to honor Pepperdine alumnus Thomas E. Burnett, Jr. (MBA ’95), a passenger on United Flight 93 whose life was cut short in the 9/11 attacks. In the garden there is a plaque that reads: “Dedicated to freedom’s heroes of September 11, 2001, and the passengers of United Airlines Flight 93, among them Pepperdine alumnus Thomas E. Burnett, Jr., who sacrificed their lives to overcome terrorists’ intent on destroying American lives and landmarks in our nation’s capital. We shall never forget.” 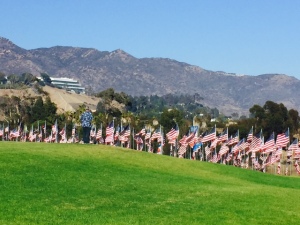 Waves of Flags is open to the public at the corner of Pacific Coast Highway and Malibu Canyon Road until September 26. If you missed it this year, hopefully it will be back next year in September 2017.