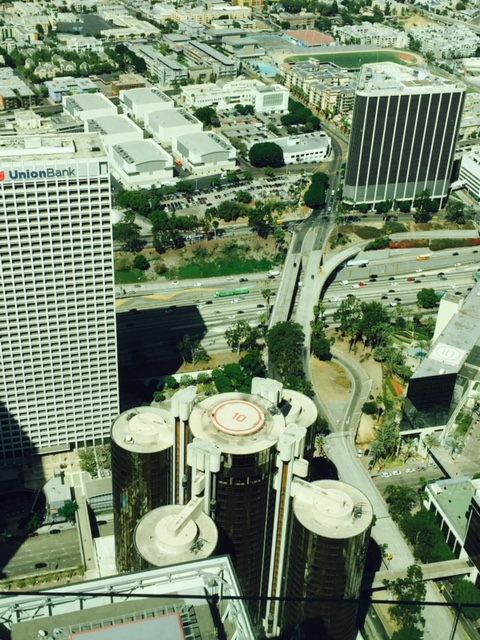 The skyline in downtown Los Angeles has been transformed over the past few years. The US Bank Tower, erected in 1990, didn’t move or add more floors, but took things outside. OUE Skyspace opened the LA Skyslide in June, a 45 foot plunge outside of the building. The four-inch thick, clear glass slide, affixed 1,000 feet high to an open air observation deck is quite a thrilling ride.

Also new to the US Bank Tower is the restaurant 71 Above, named so for its location on the 71st floor of the iconic building. Panoramic views from the sea to the mountains make 71 Above a must-see destination.

Dining is available in the main dining room, at the Chef’s table, in semi-private dining or at casual seating in the bar. All of the menus are prix fixe, with the option of adding wine pairings.

In the semi-private dining area, with views stretching from the Los Angeles basin to the San Gabriel Mountains and the Inland Empire, I enjoyed a three-course lunch with a group of friends.

We started with a choice of starters that included a creamy sunchoke soup with a sweet garlic puree, creme fraiche, smoked trout and dill. Our server described the flavor profile as a bagel with lox in a bowl.

The entrées included a nice slice of pan-fried halibut with crispy skin on a bed of sweet heirloom tomatoes, sliced cucumbers and pearl onions. The dish was glazed with aged sherry and a little coriander and tarragon.

My friend Shaena ordered the scallops, three large pieces resting next to asparagus spears, wild mushrooms, parsley and pretty micro flowers. What made this dish dazzle was a splash of Banyuls vinegar, made from a sweet wine from the southern region of France that borders Spain, and is more mellow than acidic red wine vinegar.

Other dishes include a Southern-style pasta made with durum wheat conchiglie and topped with shrimp, corn, chive, lime and Creole spices.

Vegetarians at the table enjoyed a dish of roasted zucchini with sunburst squash, garlic, pine nuts and a generous heaping of Parmesan cheese.

For dessert, we sampled a caramel custard made with a white vanilla soy gelee with a truffle-almond praline and a scoop of coconut sorbet. A sprinkling of pork and maple powder gave it a umami essence. Peaches and cream with sliced peaches were topped with peaks of black tea mascarpone gels. Classic white chocolate cremeux, that is similar in texture to pudding, was also served. The plate also had a matcha marshmallow and a sprinkling of candied lemon zest to create a sweet, yet slightly tart treat.

For a special occasion dining experience in the tallest building in Los Angeles, 71 Above will thrill you in views, cuisine and dining experience. There is self-parking and valet parking at the entrance of the US Bank Tower. Valet is $10 for the first three hours.

Reservations can be made on their website, and payment in full gives you a “ticket” with the number of guests and time of the reservation. Pricing is variable and depends on the menu.

This was featured in the Beverly Press and Park LaBrea News on October 20, 2016.