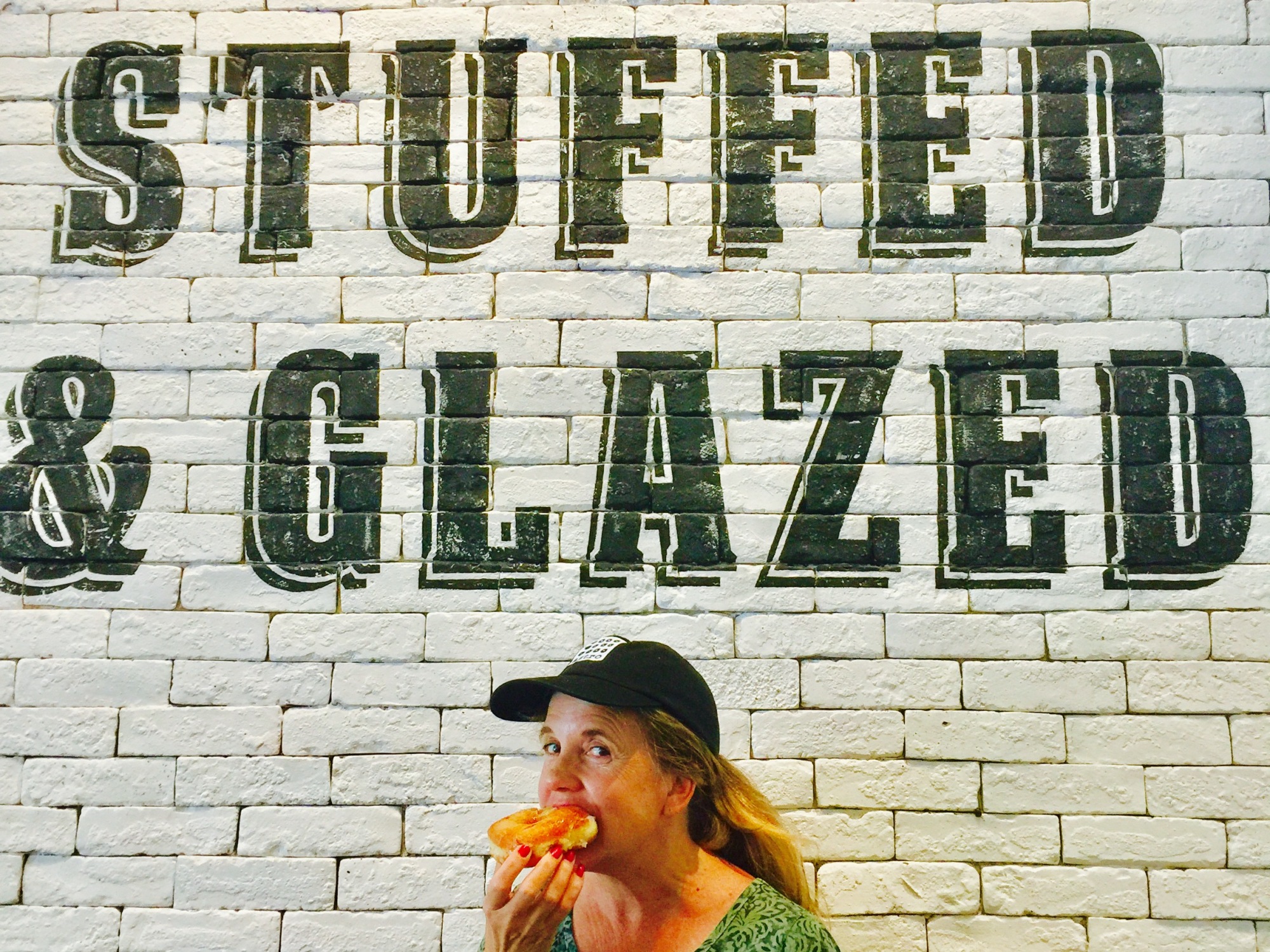 On National Creme Brûlée Day I visited Astro Doughnuts & Fried Chicken to bite into a creme brûlée filled glazed doughnut. The raised creme brûlée doughnut is filled with luscious cream, just like the traditional ramekin and it’s enhanced with a slightly burnt caramelization on top. 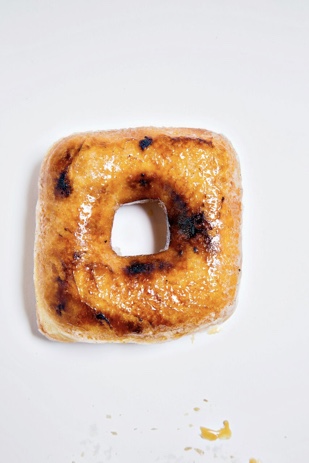 Walking inside the modern interior, I first noticed a white painted wall with the words FRIED, STUFFED & GLAZED in big black letters. Below were dark wood tables and heavy reclaimed wood and metal chairs. There’s more seating on high stools near the glass display counter featuring an array of colorful doughnuts.

While there I met Art Levitt, the West Coast partner of Astro Doughnuts & Fried Chicken. The distinguished and tall Levitt was standing near the counter and I introduced myself, and asked him how he got involved with the doughnut and fried chicken concept?  “It started while I was interviewing for a job in Washington D.C. about two years ago,” he told me. “While walking by a tiny space, I noticed a huge line of people and decided to stop and see why it was so popular. It was worth every second of waiting to taste this incredible product.” 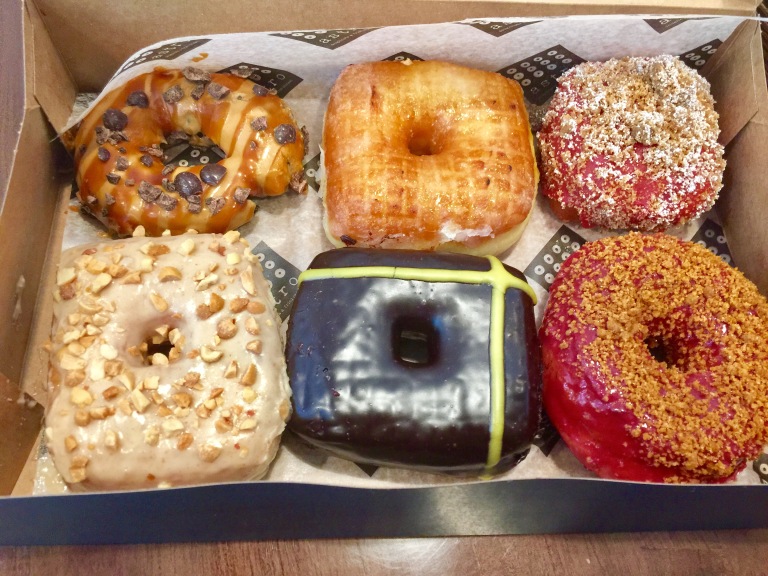 The concept is two American favorite comfort foods: doughnuts and fried chicken with a modern spin of inventive seasonal flavors. They combine both into breakfast and lunch sandwiches offering an elevated new take on the traditional southern waffles and fried chicken.

Being a Harvard Business graduate, Levitt knew a good thing when he saw it, and introduced himself to the owners and co-founders Jeff Halpern and Elliot Spaisman. He learned that both grew up playing hockey in Montgomery County, Maryland. “They loved getting doughnuts after a hockey game,” Levitt said. Later Halpern turned pro playing on various hockey teams that included the Washington Capitals and Los Angeles Kings. They took him out to the Astro Food Truck and laughed when they all noticed the truck was rocking and shaking on the street. “People in D.C. expect the Food Truck to open at an exact time, and will push and rock the truck if it doesn’t open on time,” Levitt said.

Believing this would do well in Los Angeles, Levitt told Halpern and Spaisman that he wanted to participate in the concept and open an Astro Doughnut & Fried Chicken on the West Coast. When they heard his resume, former President Disney Regional Entertainment; CEO of Fandango and CEO of Hard Rock Cafe, they agreed to a partnership. “The D.C. guys are the nicest people,” said Levitt. “They are here all the time, in fact Steve was here last week.”

Levitt took me on a quick tour of the extremely clean kitchen divided into sections. There is the grill next to the pressure fryer “this cooks under pressure to keep our chicken uniquely moist,” said Levitt. He showed me the “stuffing” station where they fill certain doughnuts with pastry cream or jam. There is also a topping station where they dazzle the doughnuts into works of art. “Fresh doughnuts come out every hour,” Levitt said. As they sell out a rack, “we refresh and re-bake.” 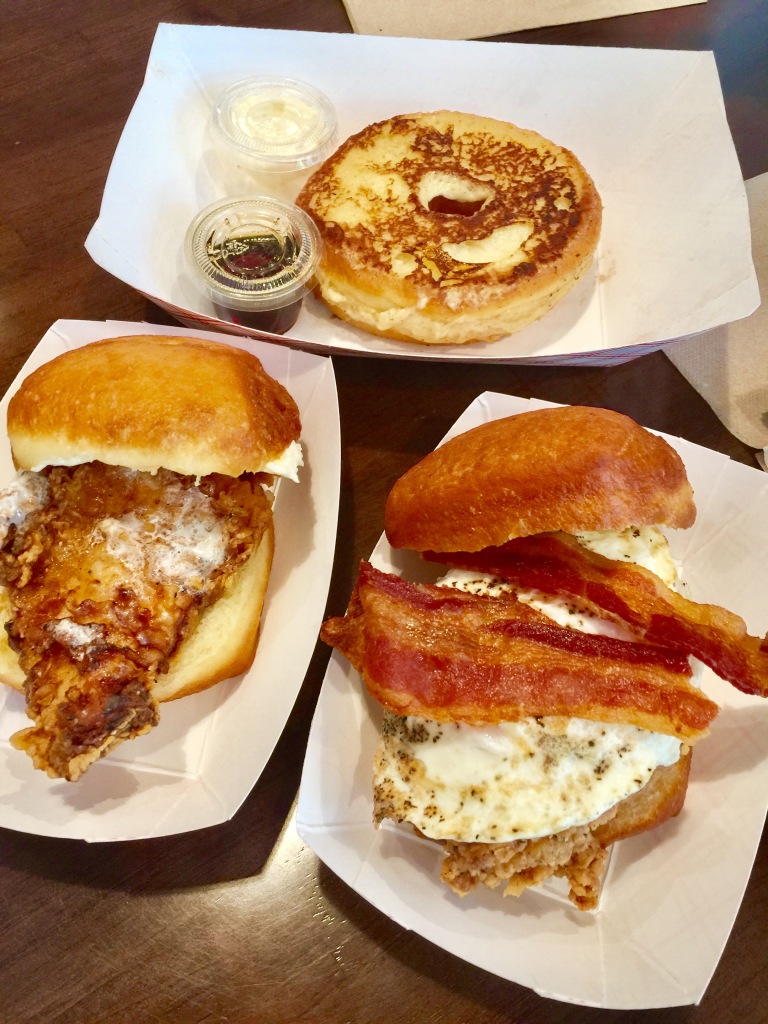 The biscuits for the breakfast and lunch sandwiches are made from scratch too. There is one enormous mixer for dough and another large mixer for sauces and glazes. They have a special chicken warmer to keep the chicken moist and hot after it’s removed from the pressure fryer. 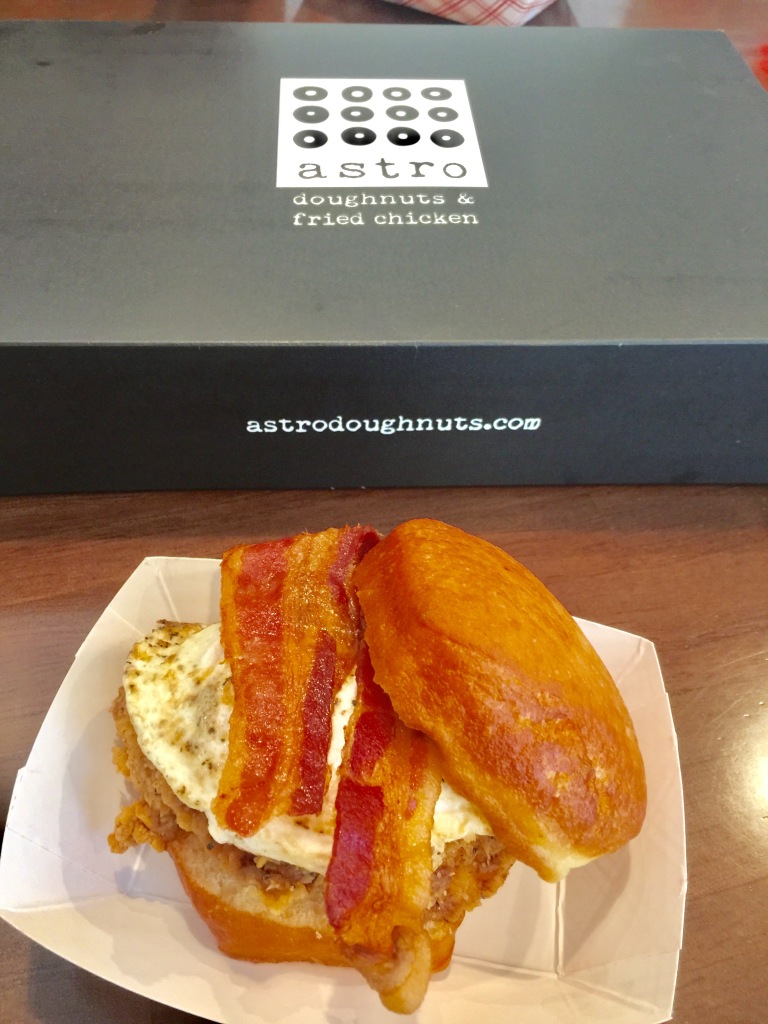 On the menu chicken is offered different ways. You may order two pieces of dark meat; two pieces of white meat; four or eight pieces. They also offer some of the best chicken fingers in town. They arrive five in a box with a dipping sauce. 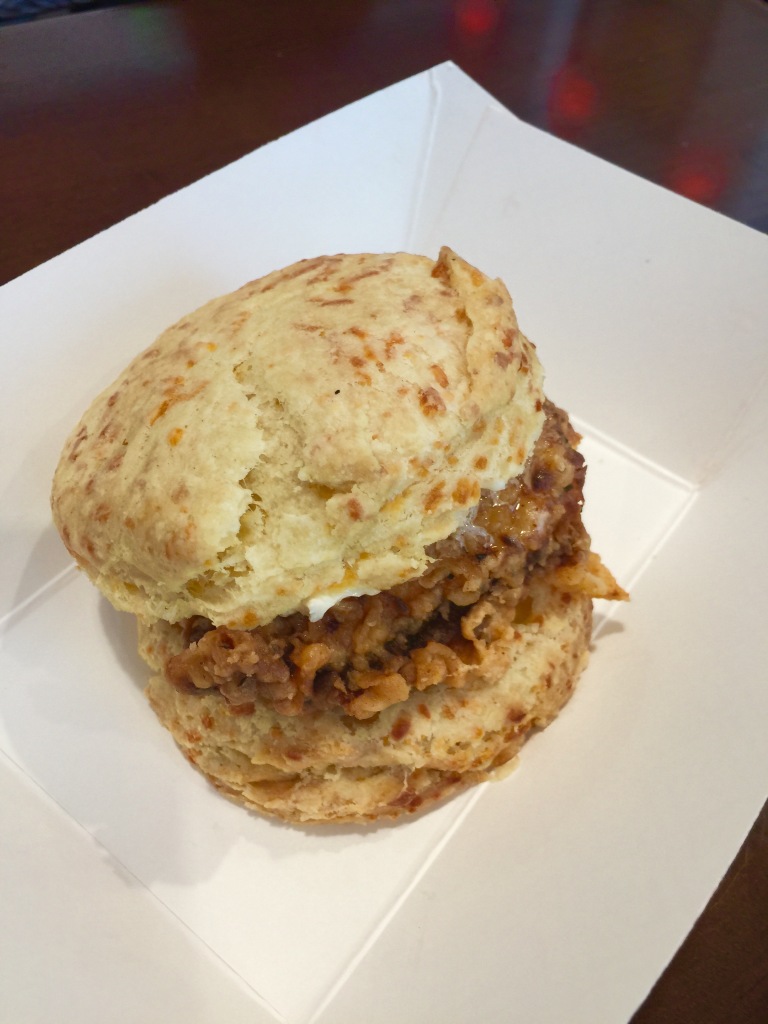 As he excused himself to take a phone call, I ordered a few breakfast items before they started serving lunch to the downtown crowd. First I ordered two breakfast biscuits with chicken. One was on a fresh biscuit with a fried farm fresh egg and bacon in between and the other was a cheddar flecked biscuit with honey butter and fried white meat chicken pieces. These are only available until 11 a.m. They also make a French toast doughnut style roll served with butter and pure maple syrup.

During lunch the sandwiches are square instead of round and can be ordered on a savory doughnut; potato roll or Old Bay doughnut. On the sandwich guests can add blue cheese sauce, Sriracha mayo, Sriracha Buffalo, honey mustard, Ranch and BBQ to enhance the fried chicken with lettuce and tomato. They also make a fried chicken BLT sandwich on your choice of roll.

Sides include crispy on the outside and warm and soft on the inside tater tots and kimchi cole slaw.

Before leaving, I ordered a half dozen Astro doughnuts to take home. It was fun selecting a few of the daily doughnuts and a couple Astro special artisan doughnuts. They make four special flavors that rotate every month. The day I dined they had a dark chocolate caramel Macchiato; red peach Melba doughnut filled with fresh peach puree; a rack of bright magenta colored blackberry lime tart doughnuts, and an artistic Boston Cream with two bright yellow passion fruit thin lines going across the chocolate glaze and connecting on the bottom right corner. 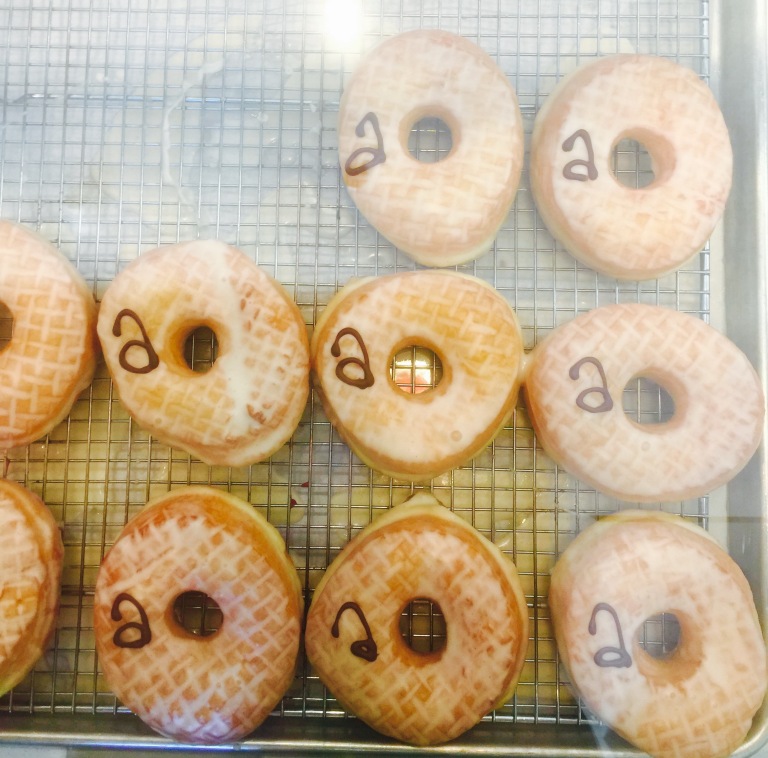 The daily donuts are a vanilla glazed with a cursive small chocolate “a” on the left side. The maple bacon is “the bomb” with maple glaze and chopped bacon pieces. My favorite daily doughnut was the PB&J. Biting into the raised doughnut filled with red jam, and glazed with peanut butter and a sprinkling of chopped peanuts, took me down memory lane. It tasted just like the sweet red berry jam with crunchy peanut butter spread on bread I ate as a youngster. 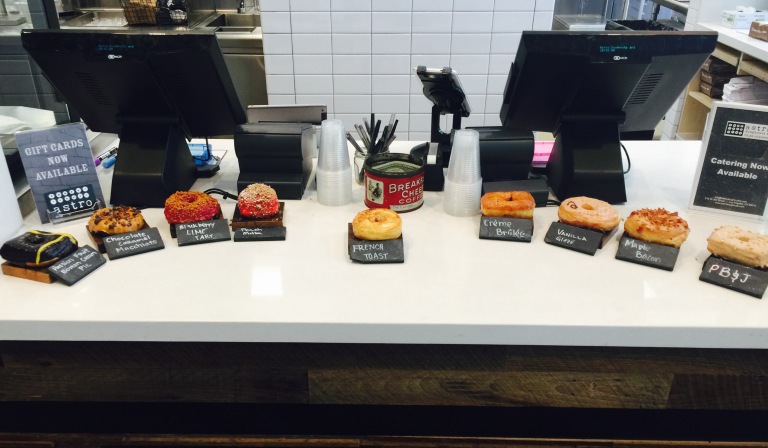