With the winter edition of dineL.A. in full swing, now is the time to visit BOA Steakhouse for their exclusive series dinner menu. BOA is typically a pricey, special occasion destination, but during dineL.A., the restaurant offers multiple courses of innovative dishes at a fixed price.

Sitting outside on the romantically dim patio with heaters to keep guests toasty, my friends and I excitedly looked over the one-page menu and decided to order different dishes to taste all the starters, entrées, side dishes and desserts offered.

For my first course, I ordered the foie gras torchon, intrigued by foie gras on a funnel cake with blood orange marmalade. The nearby funnel cakes of the Santa Monica Pier served as executive chef Michael Neflas’ whimsical inspiration for this signature dish – but BOA’s crisp, slightly puffy cake proved more refined. To top it off, the creamy foie gras featured a dollop of bright blood orange marmalade, offering a hint of citrus sweetness to balance the smooth, fatty delicacy.

Others at the table ordered the classic tableside Caesar salad, which the server prepared right at the table. With salad tongs in hand, he mixed lettuce, dressing, anchovies and squeezed lemon before tossing and serving the salad on individual plates. Another friend ordered the chef’s selection of four oysters served on a beautiful dark blue plate with a lemon and red wine-mignonette for seasoning in the center. 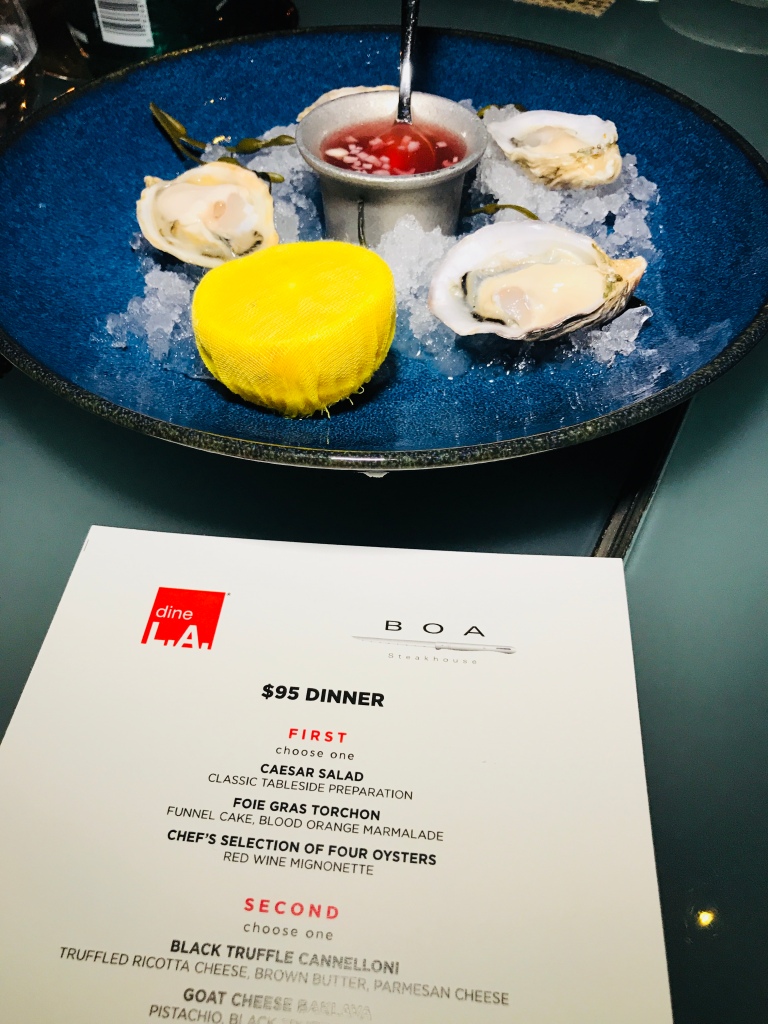 For our second course, I ordered the popular goat cheese baklava. Made with baked phyllo dough, it’s filled with a spread of goat cheese and black truffle. The top is dotted with crushed pistachios and drizzled with honey. Served with a side of curly frisée, the dish is truly delicious.

I also tried the pan-seared scallop served on a plate with a smear of salsify, cauliflower and carrot purée. Salsify offers the texture of a potato with an essence of artichoke or white asparagus, and pairs well with the thinly shaved cauliflower flowers decorating the dish. 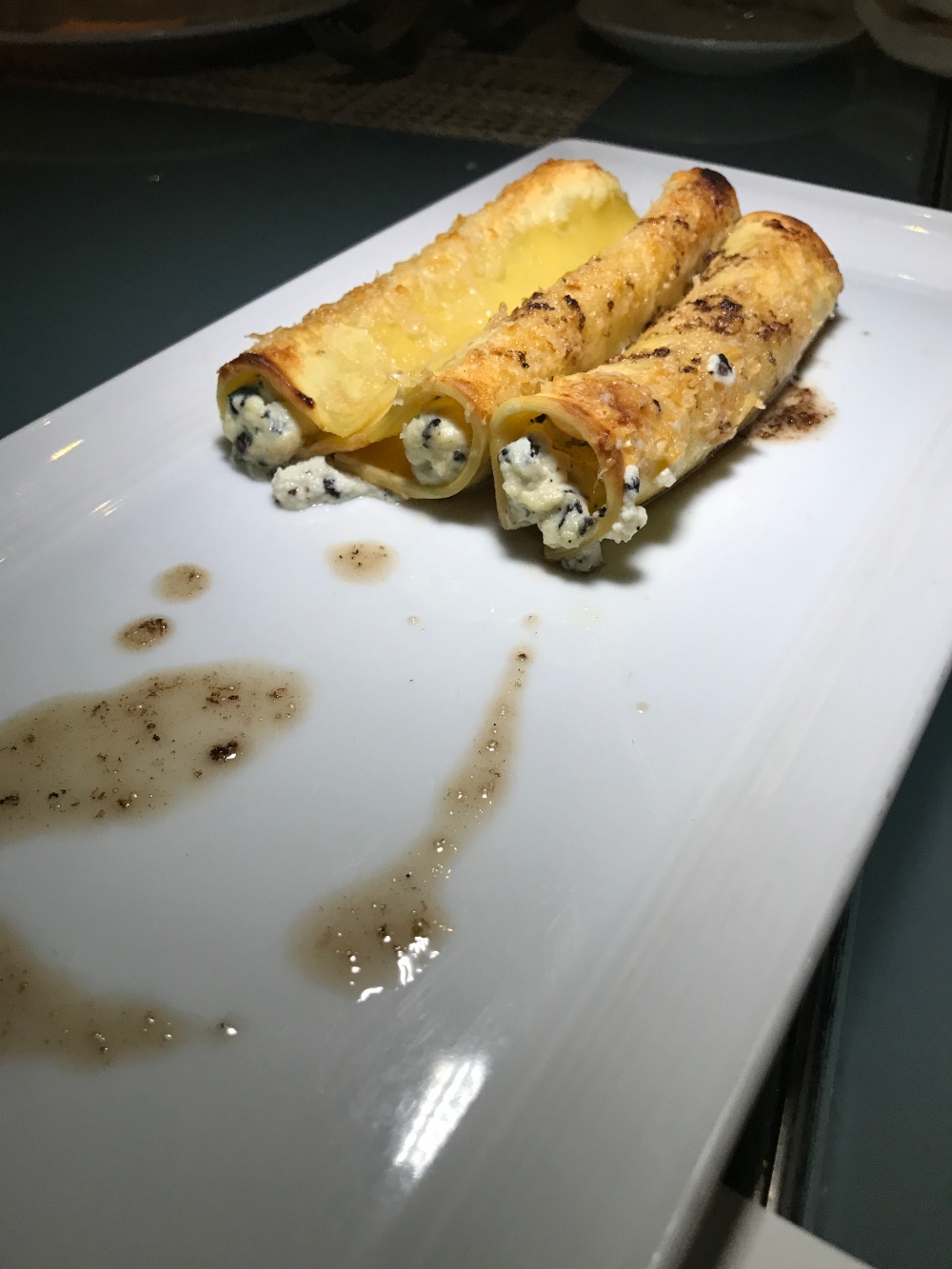 Others at the table ordered the black truffle cannelloni that looked more like a taquito rolled with truffled ricotta cheese, a touch of brown butter and Parmesan cheese. It was good, but a little too dry for my liking.

Entrées include a nice portion of 40-day dry-aged New York steak and a duo of Mary’s Farm duck. The latter dish arrived with a pan-seared duck breast and duck leg confit resting on top, and drizzled with duck jus all around the plate for added flavor.

Local wild sablefish, also known as black cod, is a silky, delicate fish that provides more omega-3 fatty acids than most other fish. At BOA, they serve it with a roasted garlic bulb for a savory dish.

For those seeking the ultimate surf ‘n’ turf, order the cod with a 4-ounce slice of A5 wagyu. It’s the most tender and flavorful steak. Side dishes include the potato and butternut squash gratin, mac and cheese, and lobster mashed potatoes. 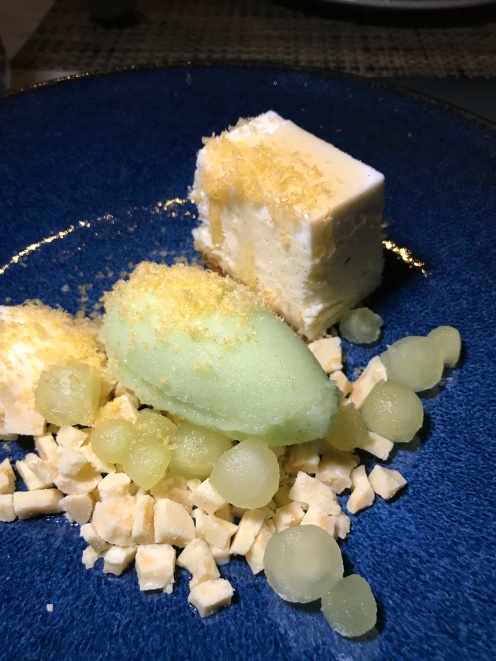 Even though we were thoroughly satisfied with the dishes, we still ordered both of the desserts on the menu. The Winter in the Windy City is visually spectacular with a stencil of Chicago’s skyscrapers in chocolate and sprinkling of powder sugar as snow. Inside a perfectly round almond biscuit made of Joconde sponge cake was chestnut-flavored Bavarian cream with crème chantilly and buttermilk granita. It was light and refreshing, with ice crystals melting on my tongue, almost as if I were catching a snowflake.

The last dessert was also visually pretty, consisting of a rectangular piece of mascarpone cheesecake with small cubes of milk crunch and fennel pollen syrup. On top of it all was a sprinkle of orange Mimolette cheese from France. Little light green honeydew balls provide a pop of color, as did a scoop of green apple sorbet.