Screenwriter and playwright José Rivera (over 26 plays and an Academy Award nominated Motorcycle Diaries) wrote “The Untranslatable Secrets of Nikki Corona” with an interesting story line about death and communicating with loved ones in the afterlife. In the Playbill, Rivera was interviewed by Rachel Wiegardt-Egel about his inspiration for the play. About ten years ago, while looking through Harper’s Magazine, he noticed a company whose service was to connect people who are dying, with people who want to send a message to the other side. This fascinated him, and soon he began writing a creative play about exploring the afterlife where untranslatable secrets are told.

We first see a young woman named Abril (played by Onahoua Rodriguez) who “can’t see colors anymore” and while standing at a railing on a bridge in San Francisco, calls her twin sister Nikki Corona (also Onahoua Rodriguez) on her cell phone. Unable to receive a response, Abril leaves a message, snaps a “selfie” and jumps into the turbulent water below.

Nikki is riddled with guilt for not being there when he sister desperately needed her and seeks help from entrepreneur Maren (Cate Scott Campbell). Visiting her Brooklyn based company – A Better Orpheus (named after the Greek character), Nikki learns that Maren  connects grieving loved ones (Nikki) with dying patients (Orlando). These “travelers” are paid to deliver messages to the dearly departed. Maren is a bit of a matchmaker and the money she collects, minus her fair share, is given to the dying person’s family to pay for a proper burial or other needs.

Projection designer Hana S. Kim enhances each scene with innovative graphics taking us to San Francisco with the fog rolling in, serene parks with birds, hospital rooms, bustling cities and the underworld. Sound Designer Cricket S. Myers and Lighting Designer Lap Chi Chu add to the tone of this play, as the audience embarks on a journey to the unknown.

When Maren introduces Nikki to a terminally ill cancer patient Orlando (Ricardo Chavira) lying in his hospital bed, Nikki is taken aback about how this dying middle aged man is charming, engaging and attractive. He is not a perfect gentleman, yet his personality lightens her grieving mood, and her heart swells when they are together.

After intermission the story falls into an imaginative, fantastical place full of bizarre interactions with people from Orlando’s past. It’s similar to Alice in Wonderland by Lewis Carroll, filled with magical connections to the psychology of the characters and the reality of the moment. 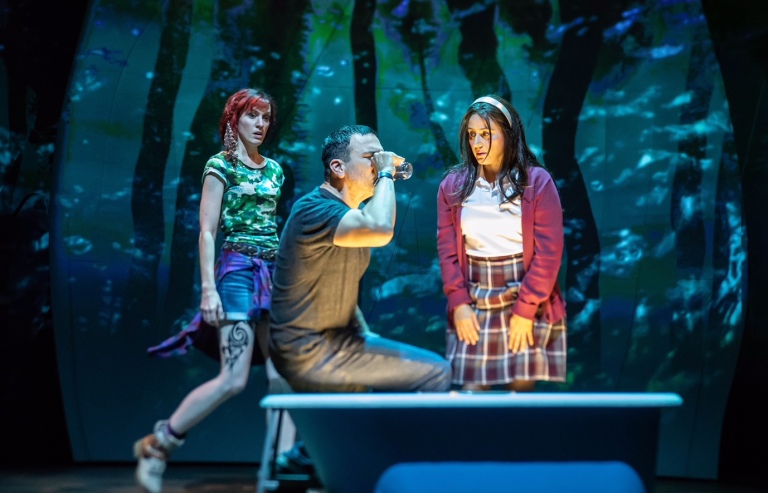 Orlando is disappointed when her dies, realizing he didn’t arrive in the heaven he’d heard about, as he befriends his “guardian angel” Lisandra (Cate Scott Campbell again) in a Dante’s Inferno style world. She is dressed a little bit like Peter Pan with a long feather in her hair. Scenic Designer Myung Hee Cho’s turntable stage allows Orlando and Lisandra to stroll among the woods and underwater world with octopus tentacles above in search of Abril. Along the way they confront Orlando’s first love in high school as she is drinking from a bathtub filled with tears. He is reunited with his brother who died in a motorcycle accident pounding as large rock on a motorcycle helmet. Orlando confronts him about the guilt he has held for so long when he had to make the decision to take his brother off of life support. Last he approaches his mother, who died of a broken heart, as she sorts piles of photographs with a one page resume, we learn about her disappointments in life. Lisandra informs them all, that they must pass a simple test to get the experiences they were supposed to receive to travel beyond.

My head was spinning after watching this play. I thought the acting from this talented cast was strong, and I wanted to love this premise, yet I feel it still needs some work and about 15 minutes shaved in certain scenes.

One will never know what made Orlando laugh loudly before he died, when Nikki whispered her final message to her beloved messenger. At the end, Abril laughs just as loud as Orlando did, as he whispers that untranslatable secret into her ear and the stage goes black.