Australian Chef Curtis Stone’s is one of the most charismatic chefs I’ve ever met. His mega-watt smile, culinary talents and charm has landed him appearances on a number of top rated programs including Take Home Chef (TLC), Top Chef Masters (Bravo), and Food Network’s All-Star Academy. 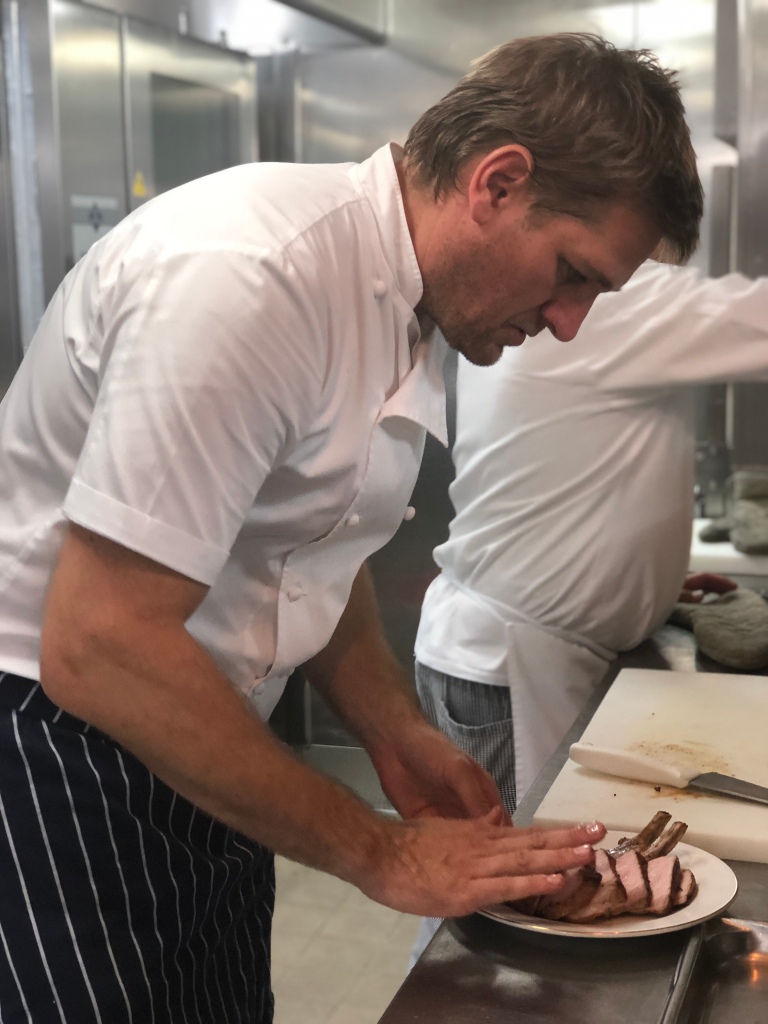 Chef Stone began his cooking career in his homeland of Australia and later honed his skills at Michelin-starred restaurants in London under renowned chef Marco Pierre White. Southern California foodies embraced Stone with open arms when he opened his first solo restaurant, Maude in Beverly Hills in February 2014. The restaurant is named after his beloved paternal grandmother and first culinary mentor. Stone’s unique approach at Maude is to give a fine dining culinary experience by serving an array of multi-course dishes, showcasing the finest ingredients available each month of the year.

With its success, Stone opened his second restaurant, Gwen Butcher Shop & Restaurant in Hollywood in July 2016. He did all this while also becoming a New York Times bestselling author with six cookbooks – his most recent titled – Good Food, Good Life.

Stone embraced the idea and soon he was working in the kitchen with the Princess Cruises culinary team to create and open SHARE by Curtis Stone. It’s his third restaurant and first at sea, giving cruise passengers an exclusive opportunity to enjoy an exclusive and exquisite dining experience. 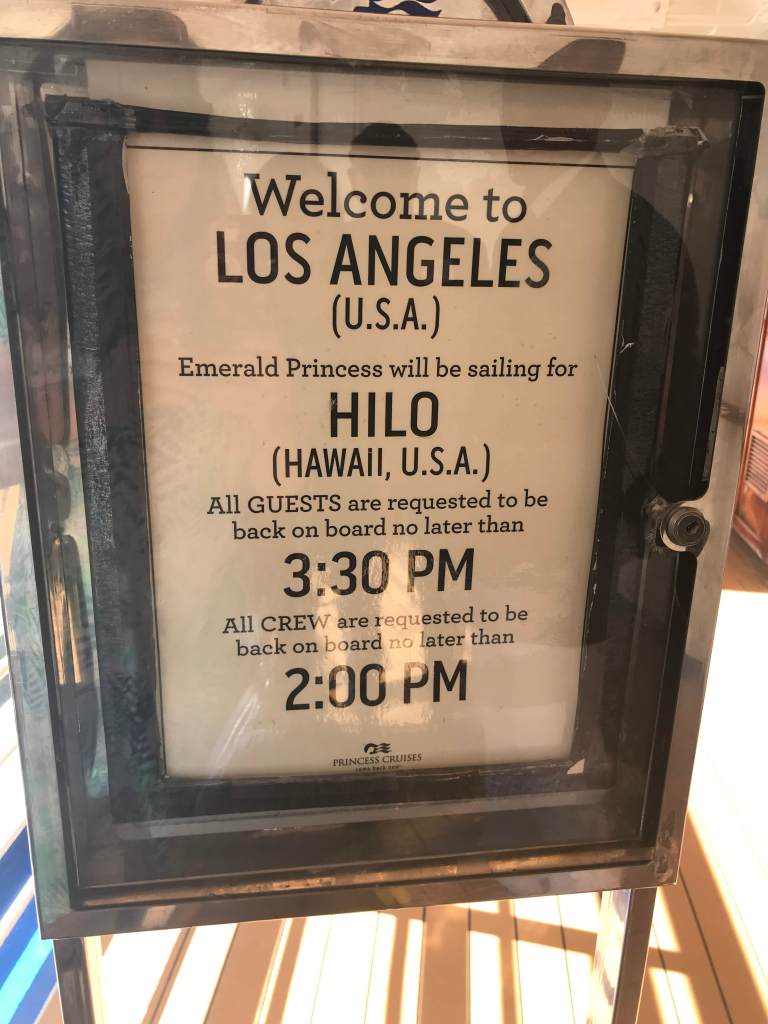 While the ship was in the Port of Los Angeles in San Pedro for the day, before taking a 39 day voyage to the South Pacific (Hawaii, Tahiti and Fiji), I had the opportunity to meet Executive Chef Curtis Stone and many members of Princess Cruises’ culinary and marketing team. It was a special celebration lunch to debut his new menu onboard the Emerald Princess. SHARE by Curtis Stone is also a fine dining experience on the Ruby Princess and the Sun Princess.

Sitting at a table for four, I admired the elegant dining room with floor to ceiling glass windows allowing passengers oceanview dining. Inside SHARE is a private dining room with Stone’s family pictures, memorabilia and cookbooks strategically placed in bookshelves. A highlight in this room is a copy of Stone’s first recipe of Orange Cake written in crayon.

While enjoying the six-course menu, we all agreed Chef Stone has made an art out of connecting strangers and loved ones by presenting beautiful executed dishes, while using the finest ingredients, premium meats, and seafood. With each course Chef Stone came out to the dining room to tell us a little story about each dish.

Here’s a preview of the menu at SHARE by Curtis Stone on the Emerald Princess:

For a Starter we enjoyed a artistic plate with a swirl of Nduja (spicy, spreadable pork salumi from Italy) with a couple of slices of Duck Speck, green olives and two types of freshly baked breads. First I spread the Nduja on the bread and topped it with the savor thinly sliced duck. 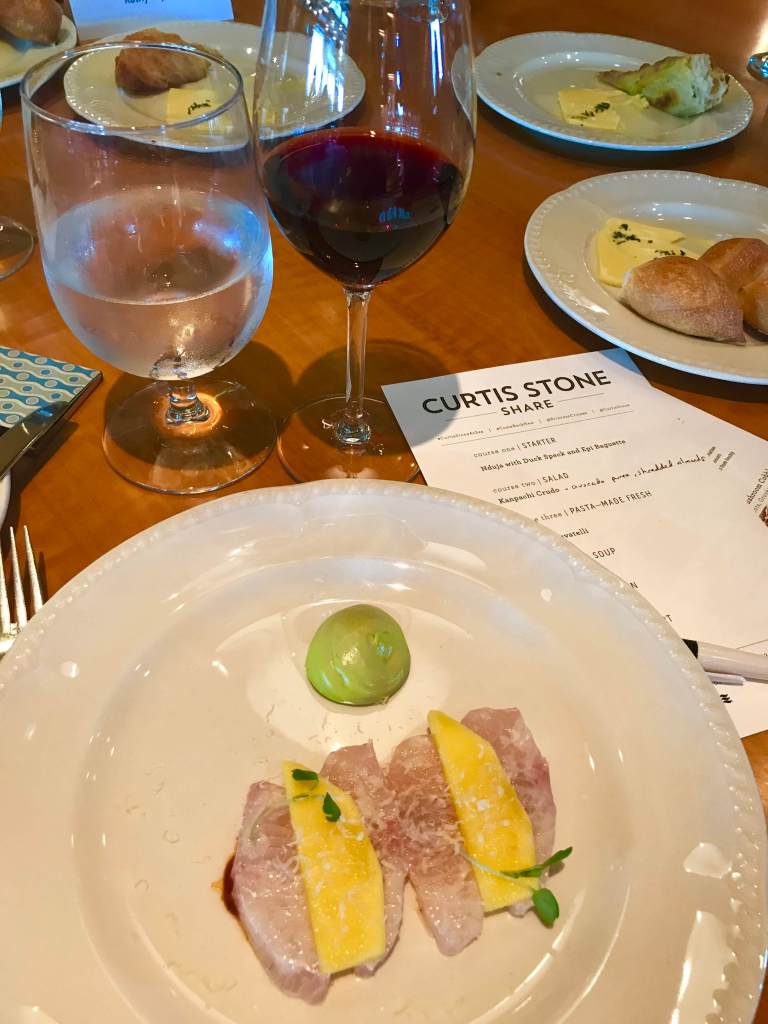 Next we received the salad course of Kanpachi Crudo with sliced mango, a dollop of avocado puree and shredded almonds on top for a little texture to balance the smooth and fresh fish and fruit. 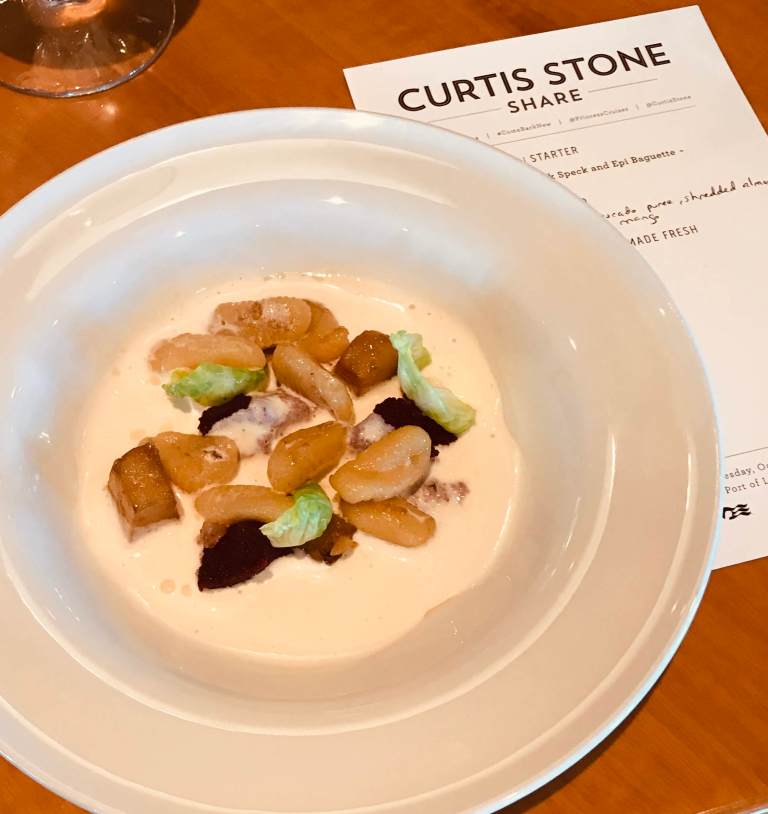 For the pasta dishes made fresh daily, Chef Stone and his team made a heavenly Ricotta Cavatelli with Brussels sprouts leaves, beets and sunchokes.

The fourth course was soup of the day – a rich lobster bisque with pieces of lobster and minced shallots.

The main course was tender Duroc Pork served with broccoli puree and carrots.

We finished with a decadent Toffee Cheesecake decorated with with dried apple chips to give it a nod to autumn, and grapes soaked in a red wine reduction.

Cruise passengers can experience this exact experience for a supplemental $29 per person fee when cruising onboard the Emerald Princess. Wine and cocktails are extra. To book a cruise onboard Princess Cruises, call your cruise specialist or click on this link  Princess Cruises.