Sitting center stage at the Geffen Playhouse, Broadway sensation and Hamilton creator and star Lin-Manuel Miranda and his father Luis A. Miranda Jr., enlightened the audience for 90 minutes about theatre, Puerto Rico and Lin-Manuel’s new movie role in Mary Poppins with moderator Soledad O’Brien. Together this father and son team are very entertaining.

O’Brien: You are actively supporting the relief efforts in Puerto Rico following Hurricane Maria in September 2017. Tell us what you are doing?

Lin-Manuel: In the way of Maria, what began as where is my family? It took five days to finally reach our family. Then became how can I help the island. I amplify what I hear on the island and navigate from there. I have no political interest, I just want the island of Puerto Rico to be proud of me. Just like they did when I brought “In the Heights” to the island. It was the most creative week in my life. Since my father is in the political world, the Governor of Puerto Rico called up my dad after he saw ‘In the Heights’ to find out who was his son. I didn’t grow up in Puerto Rico, I just spent summers on the island. While growing up in New York, I felt different than other kids in Puerto Rico, because I spoke funny. When they noticed and embraced me in ‘In the Heights’ it was a proud moment. We would do a prayer circle before every show. A cast member in the show, Pricilla Lopez who played Camilla, told me – ‘You are throwing a rock in the pool and you have no idea how the ripples will come back to you. 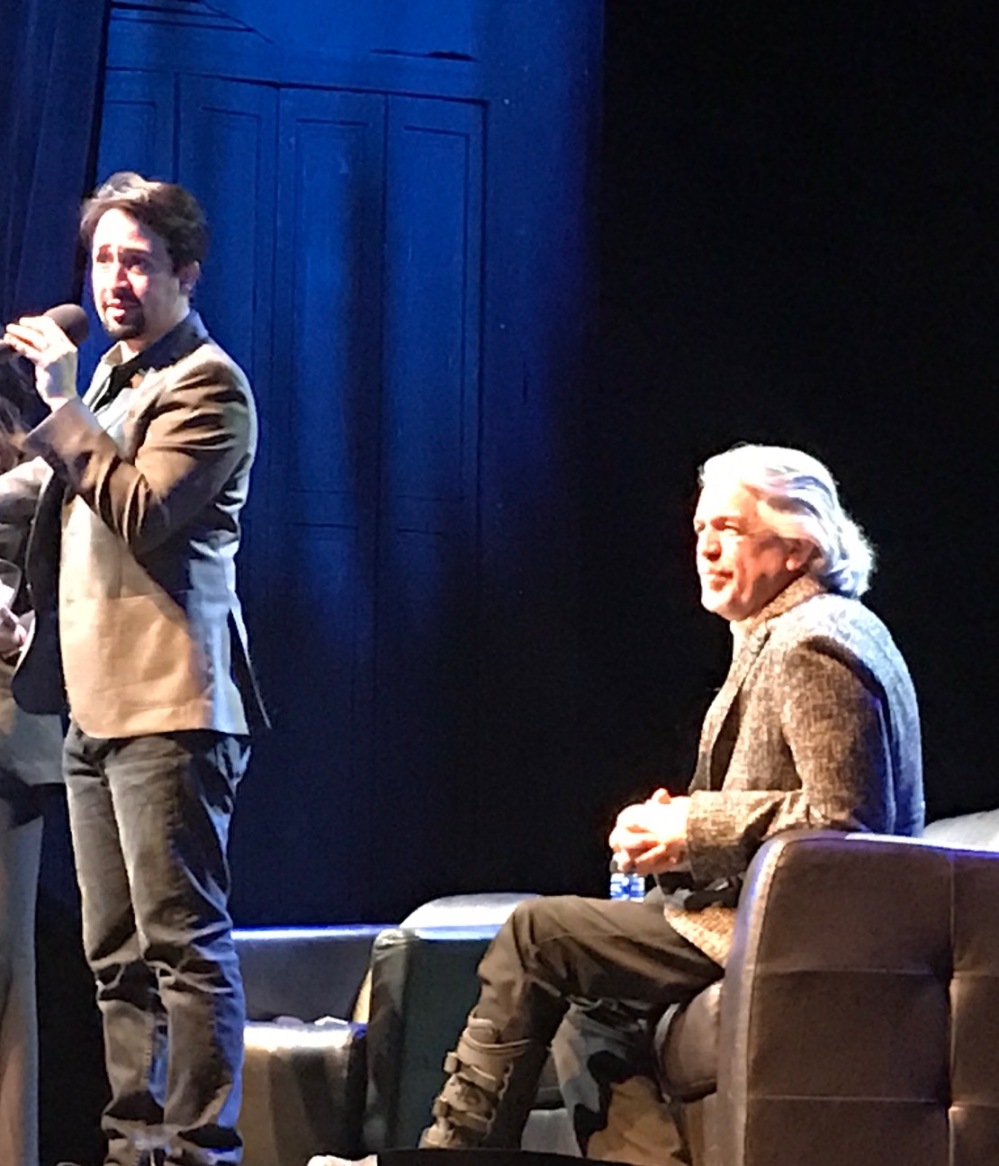 O’Brien: Tell us about the delay of bringing Hamilton to Puerto Rico?

Lin-Manuel: After Maria, there were no roofs on any theatres. I’ve been wanting to bring the show to Puerto Rico since 2015. We took the harder path to update and rebuild the theatre to become a state-of-the-art facility at the University of Puerto Rico. The theatre needed a ton of work, including a new roof, before we could perform our show. Puerto Rico is looking for heroes. It’s a message in Hamilton that I hope the islanders can take away from the show. We take the show to a small island, the most coveted show ever, to make the people in Puerto Rico feeI special. Their recent experience with the devastation of Hurricane Maria echos Hamilton. When I read Ron Chernow’s book Hamilton, I didn’t know that a hurricane destroyed St. Croix and people on the island raised money to send Hamilton off the island to do better things.

O’Brien: Why did you get so involved in helping Puerto Rico? How are you raising money?

LIn-Manuel: I just have a megaphone to get the island noticed. We will perform Hamilton for three weeks from Jan. 8-27, 2019, at the Teatro UPR in San Juan. Proceeds will benefit artists, musicians, and traveling theatre groups on the island. If you are running a traveling theatre group in Puerto Rico, that is hard work. You are working a job during the day, traveling and performing at night. We have their backs to do what they need to do for three years. Giving sits in my gut and doesn’t want to leave me alone. When it keeps me up at night, that’s when I act. Both my father and I went to the Mayors in all the towns of Puerto Rico to find out their needs after the hurricane. When it’s gnawing on you and you let everything in, if something affects you – injustice, something that needs love, it’s a calling for you to act on it. I started the nonprofit,The Flamboyan Arts Fund dedicated to preserving, amplifying, and sustaining the arts and youth education in Puerto Rico.

O’Brien: Tell us how people can get tickets to see Hamilton in Puerto Rico?

O’Brien: Are you ready to play Hamilton again?

Lin-Manuel: It’s been two and a half years since I played the role. My problem is that I go back to every draft in my head. When my wife and I saw a performance of the show in London, I realized lines had changed. For the first time I listened to the cast album to help get ready for my performance.

O’Brien: Luis did you always know your son would be a performer?

Luis: I wanted him to be a lawyer, because he was good with words. Lin-Manuel has one of the most incredible minds. During a filming of 60 Minutes at my house, he looked at my big vinyl collection and picked the Camelot album. He said “I will tell you where it skips.” He hadn’t played the record in 25 years, yet he remembered exactly where it skips.

Lin-Manuel: We used to listen to that record so many times as a family.

Luis: I knew he would be a writer as a child. He was making flip books, and when he visited Puerto Rico, his grandfather borrowed the bank’s video camera so Lin-Manuel could make movies.

Lin-Manuel: A teacher in 8th grade inspired me to write after I turned in an essay about Stephen King’s book “It”. My teacher wrote “You have been hibernating in my class unless the subject interests you. I hope you wake up for Spring Semester.” He encouraged me to join an on campus theatre club called Brick Prison and write for them.

O’Brien: How is Puerto Rico today?

Luis: San Juan is doing well, however as you drive farther away there is more need. The coffee growers are trying to redo from scratch. Coffee doesn’t grow back in a month, it takes up to five years.

Lin-Manuel: Starbucks has millions of seeds.

Luis: Since it is against the law to bring seeds to Puerto Rico, we had to hire lobbyists to work with the Republicans to get approval, so Starbucks seeds could be planted in Puerto Rican earth. It will take 3 to 5 years to grow coffee again. If we don’t start today, it will take longer.

O’Brien: Luis are you proud of Lin-Manuel starring in Mary Poppins?

Luis: I didn’t like the first movie in 1964. I was 9 years old and loved Julie Andrews and Dick Van Dyke, however the year it came out, Andrews was doing My Fair Lady on Broadway. Andrews robbed Debbie Reynolds of an Oscar in The Unsinkable Molly Brown and I was so upset. I was annoyed with Mary Poppins my entire life. When I heard Lin-Manuel was in Mary Poppins, I was pleased. When my kids are doing something fantastic, I approve.

O’Brien: Lin-Manuel weren’t you performing in Hamilton when you were cast in Mary Poppins?

Lin-Manuel: Yes, Rob Marshall took me across the street for a drink after seeing me in a matinee show of Hamilton and pitched me the role of Jack. I first asked who would play Mary Poppins, when Marshall said Emily Blunt, I thought that was brilliant. I had to check with my wife, because she makes the decisions. I never wanted to leave Hamilton and my home in New York, yet my wife loves to travel and wanted to live in England.

O’Brien: What was it like working with Rob Marshall?

Lin-Manuel: I loved his work turning the musical Chicago into a film. Working with Rob Marshall was like being in film school.

O’Brien: Locally in Southern California you offered acts of kindness by sponsoring a group of Cal State Channel Islands theatre students today. How did this happen?

Lin-Manuel:  These college theatre students were about to put on ‘In the Heights’ and then the Malibu fires started and their show was cancelled due to evacuations. They reached out to Gil Cates Jr. at the Geffen Playhouse and my team when they learned my dad and I would be in town. We are happy to have them here today.

O’Brien: Who is in the cast for the upcoming Hamilton?

Lin-Manuel: The cast is almost all new. This is the third national tour, and we cast this with a few from Broadway, others from the national tour company and then some new performers. After three weeks in Puerto Rico, the show will go to San Francisco. It’s a mix of old and new. Some have done Broadway, some have toured and some are new. The success of Hamilton is about seeing yourself in someone else’s story. When you walk a mile in someone else shoes they don’t become an “other.”

To purchase tickets for Hamilton in San Juan, Puerto Rico, go to Flamboyanartsfund.org.