Across from Bottega Louie in downtown LA on the corner of Grand Ave. and 7th Street is a new Mediterranean inspired restaurant, Le Grand. In the kitchen, chef/brother duo Alex and Chris Manos focus their brunch and dinner menus on local coastal California cuisine, yet add a French and Greek twist.

The decor inside is similar to an elegant club-style restaurant. The booths are gold tones and mirrors line on wall. Green plants and ferns drape down at the lengthy bar and around column in the main high room. Dramatic light fixtures and glossy gray floors offer a modern touch. There is an outdoor, pet-friendly patio that allows guests and their furry four legged friends to watch others pass by.

The brothers became chefs years ago after watching and working with their father. “In his 40’s, he had mid-life crisis and wanted to become a pastry chef,” said Executive Chef Alex Manos. “His passion led us to culinary school.” Since Alex is three years older than Chris, he went to culinary school first and then his younger brother Alex followed. Alex has spent time at Providence and Melisse, while Chris has worked at Michelin-starred Hytra and Spondi in Athens, Greece.

My family and I met these handsome chefs during their first Sunday brunch service. While enjoying a plate of pastries that included a beignet ball served with a warm salted caramel sauce, and a beautiful flower shaped brioche filled with Nutella, fresh raspberries and a dusting of powder sugar, the General Manager Thibaud Duccini walked by our table. He stopped and we stared into each other’s eyes. I first met Thibaud at Patina when Tony Esnault was the Executive chef (11 years ago), then we were reunited at Wally’s Beverly Hills. Now he is expertly running Le Grand with the Manos brothers. 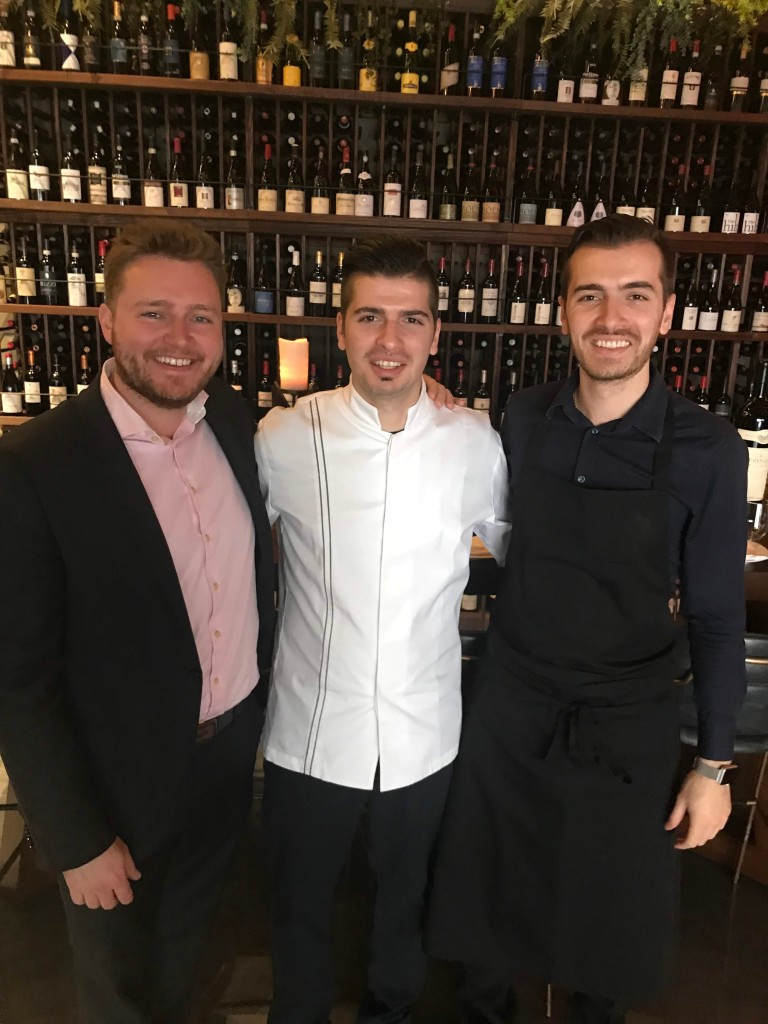 The sublime buttermilk pancakes are different than any other round breakfast cake that you have tasted in Los Angeles. Pouring some Noble Bourbon aged maple syrup onto the stack, I remarked about the distinctive bourbon, maple and oak flavor profile. Scooping a forkful of lemon zest creme frache, before cutting into the three puffy levels, I noticed the golden spheres didn’t absorb the sweet amber syrup like a sponge and become thinner and soggy. Instead, they stayed puffy. Chef de Cuisine Chris Manos said ““It’s all in the technique. We make the buttermilk pancakes as one would make a soufflé.” Also on the plate was a sprinkling of delicious housemade granola, a scoop of red berry gelato and fresh blackberries. 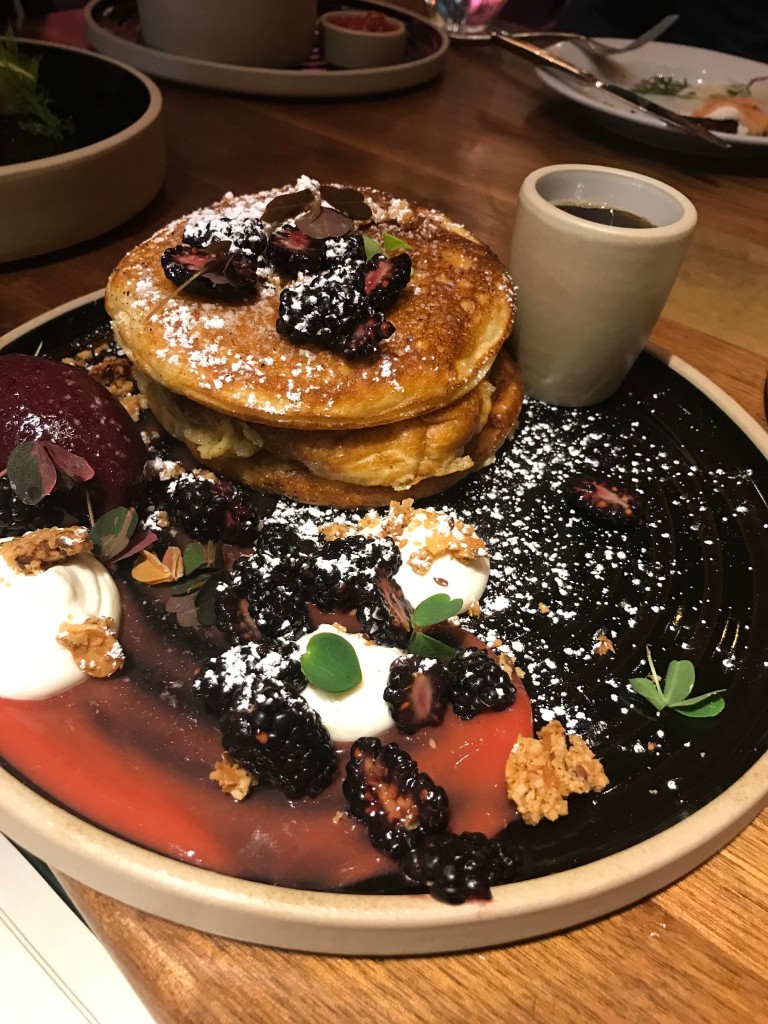 Other winning dishes included the Dungeness crab Benedict with a poached egg, Béarnaise, and jicama slaw layered on a soft and slightly sweet brioche bun.

Another floral designed entree was the smoked salmon tartine. It’s enhanced with a creamy white ricotta spread on top of toasted turmeric bread. The lacy fennel fronds offered a delicate anise flavor. They were so tender that the fennel practically melted in my mouth. The pretty thinly sliced cucumber ribbons wrapped in a circular design were a creative, artistic touch. 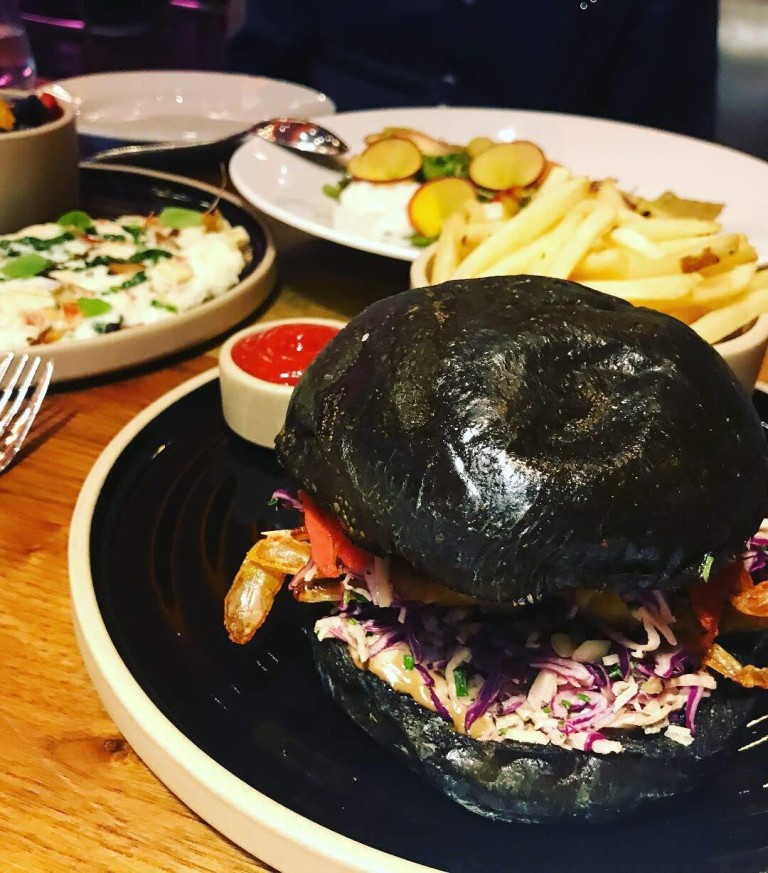 During brunch there are two impressive sandwiches, a Wagyu Burger with caramelized onions, and romaine lettuce, along with creamy, sweet and buttery brebirousse D’ Argental sheeps milk cheese.

The second dish was made with an eye-catching charcoal black brioche bun. It was filled with soft shell crab and served with a black garlic aioli spread, sliced cherry tomatoes and crunchy jicama.

For salads, the burrata with sliced summer yellow peaches is a winner. I hoped the  pistachio crackers would be crisper, yet the arugula leaves sprinkled with a pleasing 30 year old aged Balsamic vinegar was sensational.

I learned that the chefs make their own traditional dinnertime Greek dishes, including shrimp saganaki straight from the skillet and served with housemade pita.

I will be back to see if their dinner fare is as spectacular as the brunch dishes we enjoyed. Maybe on Father’s Day, as the brothers are offering specials on their Sunday brunch and dinner menu, plus every dad will receive a complimentary IPA on June 16.

This review was also featured in the Beverly Press.