When Executive chef Bruce Kalman left his restaurant Union, I wondered what would happen to this Old Pasadena favorite. Kalman made Union a star, and in return his culinary career took off launching him into Bravo’s Season 15 Top Chef contention. After four years at Union, he decided to focus on some new projects.

Owner Marie Petulla and Executive Chef Christopher Keyser took over the 50-seat restaurant with red brick walls and a tall ceiling. Eager to see how Union may have changed, I recently dined there on a Friday night, and found every table in the dining room occupied. The only seats available were at a low counter at the bar where we could hear Keyser in the kitchen directing his staff.

Our server Julie was attentive and told us that Union is still pork intensive and the chefs still butcher in-house. She recommended two of the newer items, a smoked pork ragu and the summer peach panzanella salad served with a sprinkling of watercress and the creamiest stracciatella, the softest part of burrata cheese. Torn bread croutons toasted in olive oil and sprinkled with sea salt are a nice touch. The salad is dressed with a light honey and pepper vinaigrette bringing out appealing summer flavors. 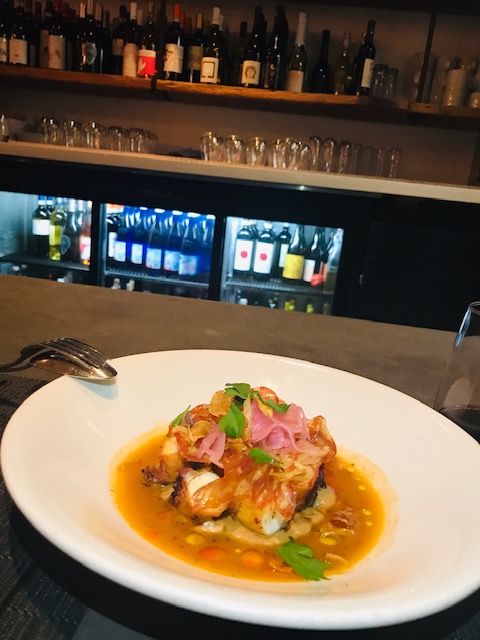 Next, we ordered the charred octopus starter, enhanced with a Spanish almond picade sauce, made with roasted almonds, bread and warm lobster jus. A nice addition to this plate was the thinly sliced cured pork salumi picante.

The pork meatballs are a popular dish bathed in a sauce made with San Marzano tomatoes, caper berries, and chile.

One of my favorite dishes were the wild mushrooms sautéed in truffle butter on a bed of creamy polenta. When Chef Keyser came out of the kitchen, I complimented him on this dish, and he told me he uses local Pasadena Grist & Toll milled stone ground corn to make this flavorful polenta. Chef Keyser adds a sweet jammy Pedro Ximenez Sherry vinegar to make this rich dish even more decadent. He also use this supplier for the wheat to make all the in-house pastas, including the sensational Torchetti made with Calabrese pork ragu. This savory dish has housemade ricotta, fried rosemary and peperoncini. Another pasta staple is the black squid ink lumache, a whimsical shaped, thick tube pasta with poached Maine lobster. Shaved fennel, a squeeze of lemon, and golden butter flecked with black truffles finishes the dish. 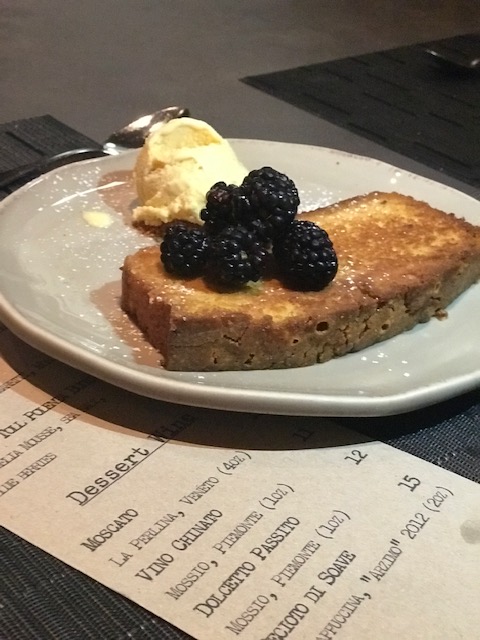 While eating our olive oil cake with freshly made ice cream, Chef Keyser came out again and shared his kitchen philosophy – kindness and respect. “I don’t tolerate a poisonous environment in my kitchen” he said. “We are serious, yet we like to have fun and encourage creativity with the dishes we prepare. Sometimes it takes three tries to get it right before we put it on the menu.” He also credits his kitchen staff by putting their names on the menu. “I find chefs who care, hire them and together we become a great team,” he said.