The first thing I noticed while checking into Graduate Berkeley, just one block from UC Berkeley’s campus, were thousands of National Geographic magazines lining the shelves behind the front desk wall. They are the same golden yellow as the Golden Bears color symbolizing California’s gold.

The Entrance into The Graduate – Photo Jill Weinlein

The lobby inside the former Hotel Durant, which opened in 1928, has a nod to Berkeley’s bohemian culture. There are hand-woven rugs, velvet couches, wall coverings and art mixed with old wood moldings.

Also at the front desk is a display of The Graduate’s newer coffee table book, made in partnership with Rizzoli publishing house displaying details about how this hotel chain showcases local stories and college nostalgia in their 35+ unique hotels.

Back in 2014, Ben Weprin, Founder and CEO of AJ Capital Partners opened their first Graduate Hotel in Athens, Georgia centered around the University of Georgia. He sought to create memory-making journeys by thoughtfully crafting hotels in university anchored towns. With each Graduate success, the company acquires, remodels and launches another Graduate Hotel across the country, and now in Europe. 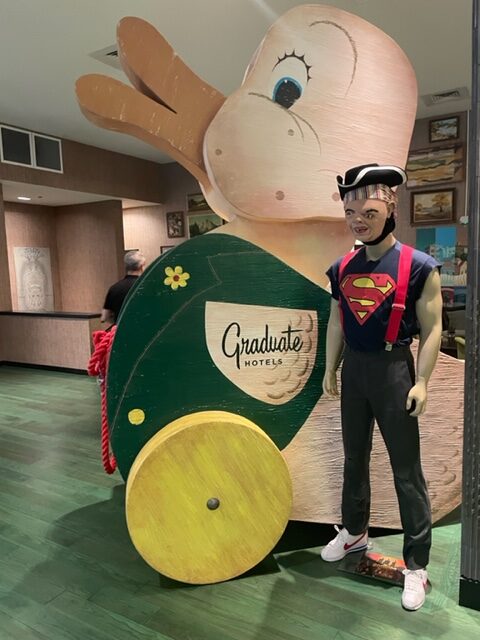 The hotels reflects the culture and charm of the nearby university, such as the first Graduate Hotel I visited in Eugene, Oregon. I was wow’d by the nostalgic lobby featuring an enormous wooden toy duck (University of Oregon’s mascot). 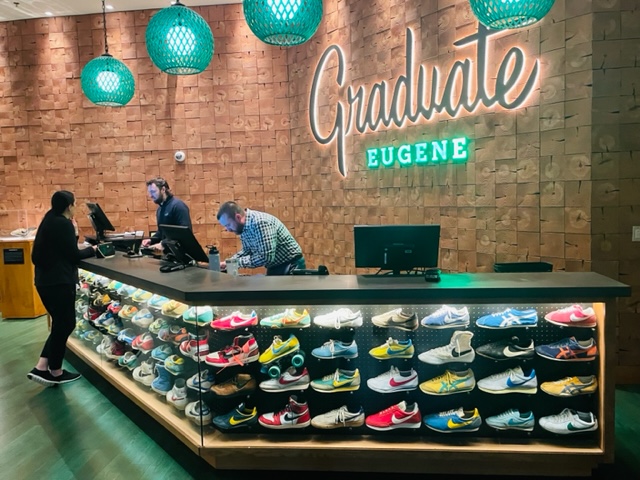 Graduate Hotel in Eugene, OR – Photo by Jill Weinlein

As guests walk to the check-in desk, there is a glass case displaying 43 pairs of Nikes. The quirky art throughout the hotel was sourced from local thrift and antique shops. It’s predominately green colors celebrate Oregon’s lush landscapes, Pacific Northwest heritage and the school’s famed green and yellow Nike track and field and other athletic programs. 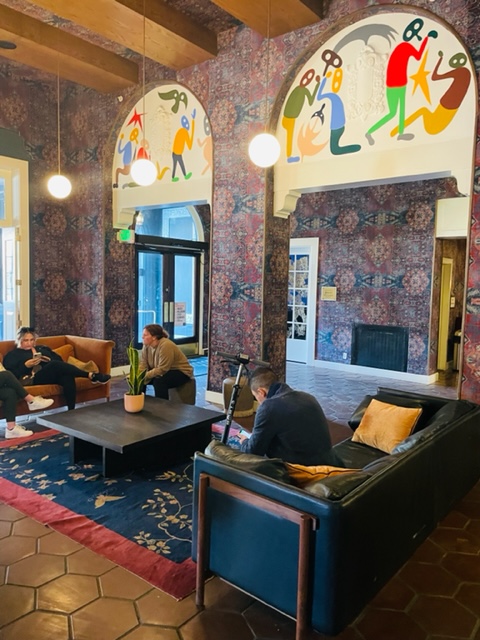 The lobby at Graduate Berkeley doesn’t have an enormous Golden Bear, but there is a colorful mural in archways and a whimsical piece of art of Cal alumni and retired NFL player, Marshawn Lynch near the elevator. Fashion sketches on the walls are a nod to Oscar-winning movie costume designer and Berkeley alum, Edith Head. 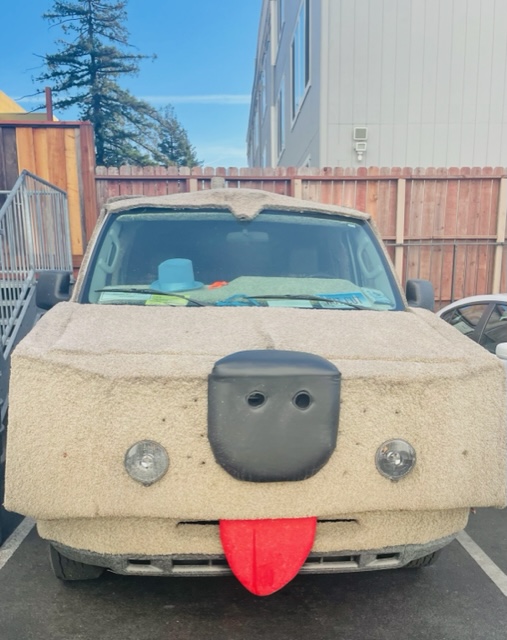 Out in the back parking lot is a reimagined Mutts Cutts van paying tribute to the 1994 movie “Dumb and Dumber,” a hit movie with the college crowd. Graduate Hotels host pop-up tailgates complete with fully-stocked Yeti coolers, a roll-out grill, music, and corn hole boards. The exterior of this tailgating van by OutCold, a Chicago-based experiential agency is part of Escape Pod Group, is wrapped in a shag carpet with a “Graduate Hotels” dog tag for tailgaters to know who is sponsoring all the fun. 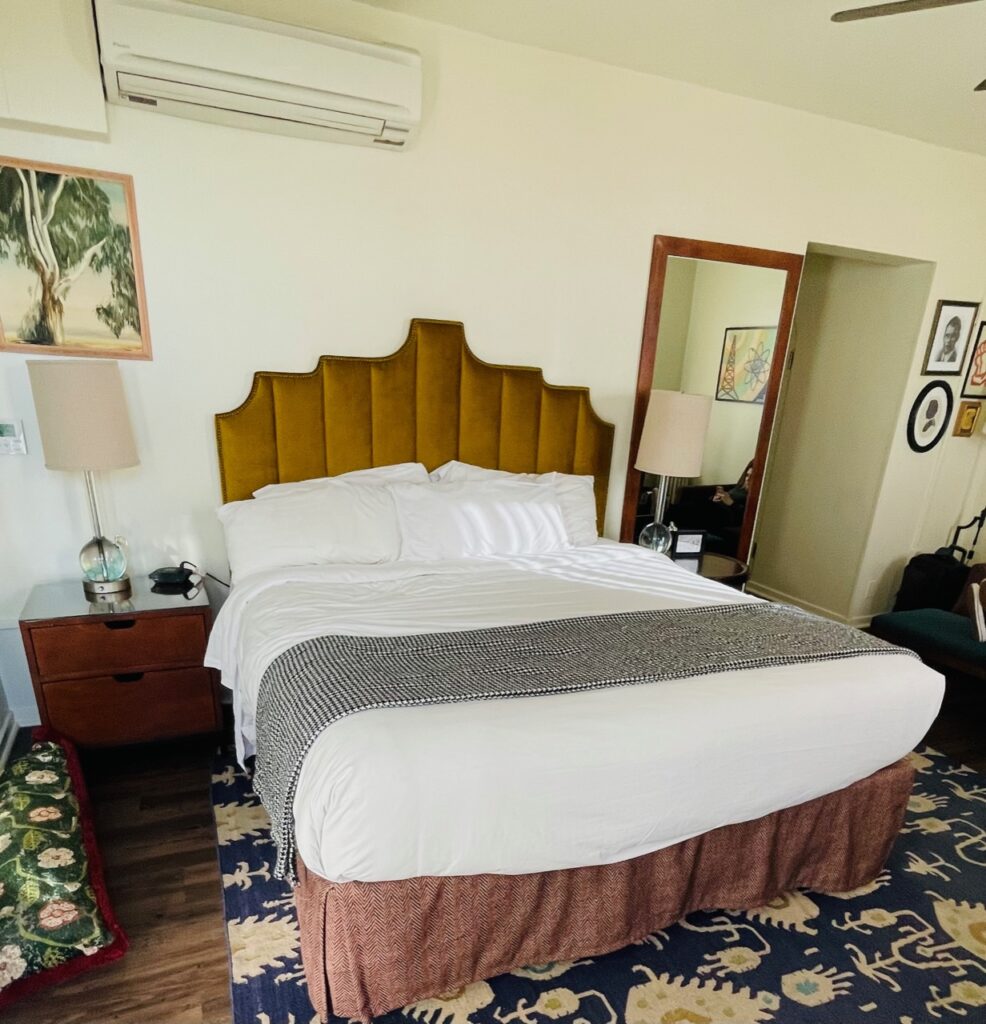 Using a Jeff Cohen ID card at a 6th floor Bay Side King guest room, we enjoyed the extra space and sunset bay views, however the window could only open a few inches for fresh air.

Thankfully the king-size bed with soft linens, ensured a comfortable night’s sleep, unlike the uncomfortable sleeper sofa. Quirky decor includes lamps on both nightstands fashioned from clear glass bongs. This room has a door leading to a neighboring Campanile Double-Double room to create a family-friendly retreat.

This room’s remodeled bathroom had a large shower and modern amenities. The closet near the front door was more than generous, due to the hotel’s design almost 100 years ago. 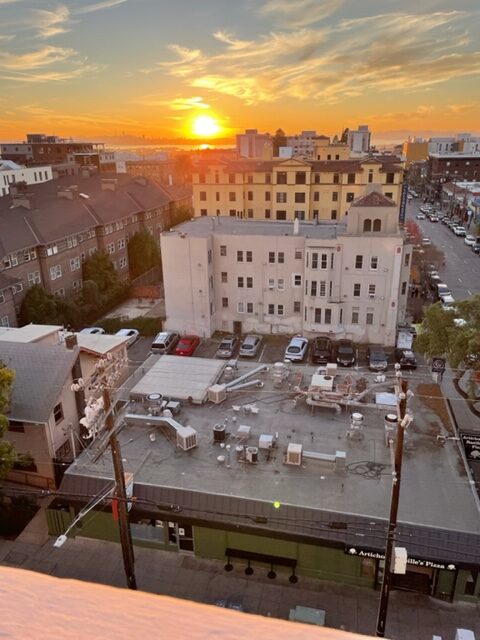 Located within a five-minute walk to campus and just steps from Telegraph Avenue shops and casual eateries, be aware during orientation, home athletic games and graduation, this street is lively and loud with Greek Row nearby and the stadium within walking distance.

The in-house restaurant is Henry’s, a popular spot for guests and parents to take their college student for beverage or pint of local brew, while enjoying fresh tavern food with a Bay Area spin.

On-site parking is in the back with two levels and three electric charging stations. Two stations are dedicated to Tesla products and one is an all-inclusive station. Overnight parking is $35. Go online to get their Park It special for complimentary overnight parking. 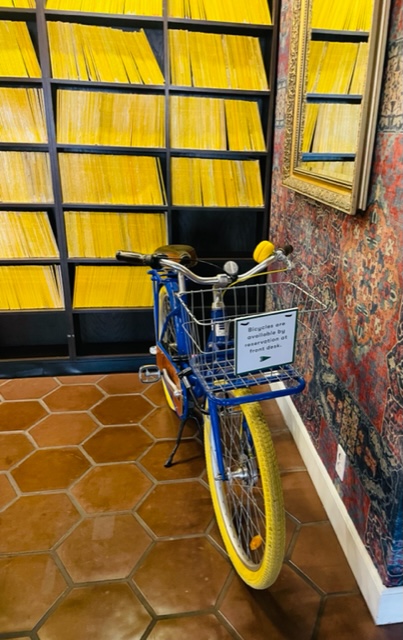 Complimentary bicycles are available to cruise around town to explore the city of Berkeley. Ask for a map or directions to take the safer bike paths and closed to automobile streets. There is a 24-hour fitness center located on the lobby level, and pets are welcome for a $35 per night fee.