After experiencing a Paleo dinner prepared by Chef Ali Parvinjah last Saturday night at Breeze Restaurant and Bar, I vowed to start my New Year’s resolution early, by eating like my ancient ancestors in the Paleolithic era.

Chef Ali at the Hyatt Regency Century Plaza is an expert at Paleo cooking and inspired me to adjust my culinary lifestyle.

Born in Connecticut on the fourth of July, Chef Ali was overweight as a child and bullied. He went to the California Culinary Academy to become a chef, because he loved eating food. Later, he worked at Patina and helped Joachim Splichal open the downtown steakhouse, Nick and Stef’s.

Seven years ago, Chef Ali was at his all time highest weight, 270 pounds. He was miserable and decided to do something about it. He met Roger Machado a professor of Brazilian jiu-jitsu who taught Chef Ali to become a vegetarian, while learning the martial arts-combat sport. While attending classes for two years, Chef Ali dropped down to 205 pounds. Feeling good about himself, he competed in Jiu-Jitsu tournaments and became lighter, faster and leaner. Chef Ali surrounded himself with people who ate a healthy Paleo eating plan, and dropped down to his 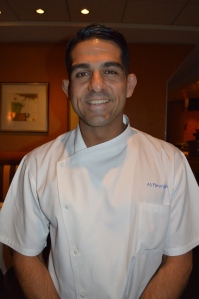 Meanwhile, Hyatt offered him a job to be a chef at various Hyatt Hotels. Chef Ali created a successful gourmet vegan menu for the Hyatt in London, and then came to the Century Plaza Hotel a little over two years ago.

“Paleo is a modern nutritional plan based on a hunter-gatherer diet, also known as a caveman diet,” Chef Ali said. “The development of farming and grain-based diets that are reconstructed are the root to obesity.”

A Paleo diet consists of sustainable fish, grass-fed pasture raised meats, eggs, vegetables, fruit, and nuts. It excludes grains, legumes, dairy products, potatoes, refined salt, refined sugar, and processed oils. He believes our bodies can’t digest these foods properly and stores them as fat. “You take in the calories, yet don’t get much in nutrients,” he said.

You will not see any of these on Chef Ali’s Paleo menu, but what you will see is an appetizing array of dishes that you could easily eat daily.

“I go to the Farmers Market every Wednesday in Santa Monica to be inspired by the soil and what grows from it,” said Chef Ali. “Recently while choosing fresh vegetables and produce, I created my winter and holiday season Paleo menu.”

The Breeze Paleo Menu features appetizers titled “The Early Days of Man,” with two dishes that peeked our interest; a roasted butternut squash bisque and a pear and arugula salad. When our dishes arrived, I asked our attentive server, Robert, how this soup can be so creamy without any dairy. Robert has worked at the Century Plaza since 1995, and explained to us that Chef Ali adds coconut milk to the butternut squash, some onions and thyme, and then smooths it out with a Vitamix.

The salad had a natural sweetness and tartness to it with the sliced pears and honey, next to fresh cranberries filled with good antioxidants.

Our server Robert recommended a glass of Canvas Chardonnay made exclusively by Michael Mondavi for the Hyatt Hotels. It’s a clean tasting

food-friendly wine. Also, we had a glass of a more oaky and buttery Franciscan Chardonnay with our salad.

Inquiring about the wine list, I noticed there are 14 wines by the glass and various bottles that range from $52 to $235. What piqued my interest

was the Director’s Cut on the back page. Robert sent sommelier Nicholas Trznadel over to our table to explain these wines. Nicholas looks at his inventory of wines and chooses a variety of bottles to sell at discounted price to make room for new incoming wines. “It’s an added value to guests and keeps our wine list current and fresh,” said Nicholas. Every two to three weeks, he changes the wines offered on the Director’s Cut list.

Under the entrées is a char grilled New York steak topped with a grainy mustard sauce and served with sautéed winter greens, and an appealing sweet potato and leek gratin. Chef Ali’s mustard sauce is made with almond milk, honey, herbs and spices. There’s no butter

Nicolas brought out a bottle of a 2011 Justin – Justification that is made with 59 percent Cabernet Franc and 41 percent Merlot. The Merlot softens the blend. It paired nicely with the steak offering deep blackberry, blueberry and currant notes with soft spice and earth tones.

I ordered a moist and tender seared Patagonian tooth fish, also known as a seabass. It was served on a bed of cauliflower “rice” with roasted artichokes, sliced fennel, and colorful baby tomatoes next to robust olives decorating the plate.

The “rice” is blanched cauliflower put into a Cuisinart to resemble Jasmine rice. It doesn’t taste like rice, yet is a much healthier option.

Desserts are under “The Sweeter Side of Man” and include a Mason jar pumpkin pie with coconut whipped topping. Our favorite was Chef Ali’s mint chip ice cream made without any dairy. It’s made with raw cashews, maple syrup, vanilla bean, fresh mint and raw cocoa nibs from the seeds of the cacao tree. The nibs give the frozen delight texture and a delicate crunch. Three tablespoons of cacao offer more antioxidants than a cup of blueberries. It also has the chemicals that produce one to feel blissful and euphoric.

So for my New Year’s resolution, I am going to try to change the way I look and the way I dine. I look forward to visiting Chef Ali again for inspiration, guidance and to enjoy his healthy,

If the Paleo menu does not appeal to you, a regular breakfast, lunch and dinner menu is offered.

For Christmas Eve and Christmas Day, Chef Ali is preparing a maple yam bisque with fried leeks and lemon misto oil, herb cashew crusted prime rib with Yorkshire pudding. Finish with a raw pecan pie with coconut whipped cream or a chocolate Yule log. Dinner is from 5:30 to 10 p.m. for $50 per person. This celebratory dinner includes a glass of Canvas Chardonnay or Cabernet. On New Year’s Eve, Chef Ali is cooking up a special three course prix fixe dinner for $80 a couple.