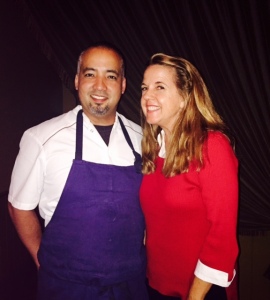 Cleo at the Redbury Hotel in Hollywood specializes in Eastern Mediterranean cuisine by executive chef Danny Elmaleh. His unique culinary style and the menu at Cleo are based on his upbringing in Haifa, Israel. Born to a Moroccan father and a Japanese mother, Elmaleh later moved to Japan where his father opened the country’s first Moroccan restaurant. Elmaleh worked alongside his father in the kitchen. The experience influenced Elmaleh and later he attended the famed Culinary Institute of America in New York.

Upon my arrival at Cleo, I was escorted upstairs to join my party on the outdoor Redbury Library terrace. Among blazing firepits, we enjoyed the dramatic Hollywood skyline while sitting in an intimate conversational area and sipping a pre-dinner cocktail.

Trays of green Vinebury vodka martinis with crushed basil, muddled cucumber, St. Germain Elderflower liqueur and a hint of serrano and lemon were passed. A sugar rim and a slice of cucumber enhanced the drink.

Walking downstairs to the dining room, we admired the various Cleopatra photos and artwork displayed throughout the room curated by renowned photographer Matthew Rolston. With a rock ’n’ roll vibe, The Redbury Hotel and Cleo restaurant oozes Hollywood charm and a casual Mediterranean flair.

We sat at a communal table near the open kitchen where chef Elmaleh inspected each dish being prepared. He looked like a conductor leading a lively orchestra.

Our server recommended a variety of small plates to encourage us to sample the large variety of cultural influences from Eastern Europe to North Africa and from Persia to the Eastern Mediterranean.

My friend, Melissa, loved Elmaleh’s baked dough Borek appetizer filled with cream cheese, parmesan and feta cheese. A brown bag was filled with baked bread which we dipped into the creamy and nutty hummus with Tahini.

A cool dish of thinly sliced cucumbers with yogurt, and a warm cauliflower dish from the wood burning oven was accented with Vadouvan spice and cashews. These dishes transported me back to Casablanca, Morocco.

We drank an old Hollywood cocktail made with Makers Mark whiskey, house-made fig almond syrup and a dash of walnut bitters, while enjoying a fig salad made with escarole lettuce, Manchego cheese and sliced almonds.

The eclectic menu offers six different homemade Laffa flatbreads, a delectable raw bar with oysters and a lamb tartar plate made with bulgar, mint and lebaneh.

Our server delivered sizzling skewers of grilled lamb, chicken and beef kebabs served on a plank with Merguez sausages and pickled vegetables. These went nicely with glasses of draft beer that included Stone Brewery Arrogant Bastard Ale from San Diego and Goose Island IPA from Colorado. 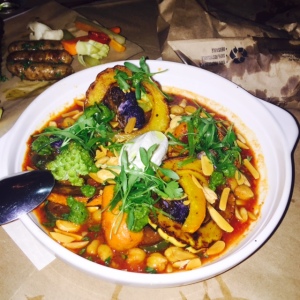 I tried a medium body white wine from Morocco that paired nicely with the chicken tagine prepared with almonds, olives, roasted tomatoes, lemon and saffron rice. Vegetarians will find a satisfying array of dishes that include a mixed vegetable tagine with caramelized honey. Another vegetarian plate is Brussels sprouts drizzled with capers, parsley, almonds and a dash of vinaigrette. 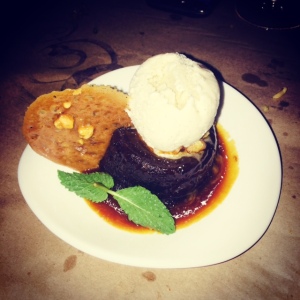 For dessert, Elmaleh makes a sticky toffee pudding cake with dates – a satisfying, sweet ending to a wonderful dinner.

Looking for a local hotel to place out of town guests during the holidays? The Redbury offers 57 apartment-style suites with kitchens that include a gas stove top, plus an array of personalized amenities.

This article was featured in the October 15 issue of the Beverly Press and Park LaBrea News.