Today I attended a preview of the 2016 Television Academy Emmys Awards festivities at the Los Angeles Convention Center.  The opportunity allowed me to see, touch, taste and learn about this year’s “Nature’s Elegance” theme with interactive food, beverage and design masters stations.

The 2016 Emmys celebration will set a new record, planning three separate balls that will take place starting this weekend. On Saturday, September 10 and Sunday, September 11, the Television Academy will host a pair of Creative Arts Balls. The following Sunday, September 18, after the funny and talented Jimmy Kimmel hosts the Emmy Awards live, nominees and winners will walk on a red carpet to one of  Los Angeles’ most extravagant award’s dinner and party. It’s actually the nation’s largest, annual formal sit-down dinner for 3,800 entertainment industry luminaries at the 68th Emmys Awards Governors Ball. Together that is a combined total of 7,400 Hollywood elite dining and celebrating following the award ceremonies. 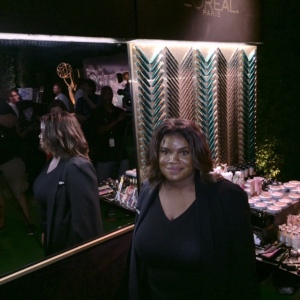 April is ready to touch up stars. Photo by Jill Weinlein

I had an exclusive first look at the decor, flowers, dinner menu, cocktails, wine, bubbly, desserts and chocolates that all the Emmys nominees and winners will enjoy at the after-party Celebrations. I even had esthetician April from L’Oreal Paris sit me down in a makeup chair and provide a touch up on my face, just as she will do to all the Emmy winners in the Winners Circle.

Next stop is a glass of bubbly. Photo by Jill Weinlein

Maury McIntyre, Television Academy President and COO announced that this is Cheryl Cecchetto of Sequoia Productions 19th year as event producer of the grand parties. Way to go Cheryl!

Audi celebrates its sixth year participating and L’Oreal Paris has been part of the team for four years. Lovely bottles of Fiji Water with straws were passed around the room, and someone was always talking to Christina at the Cellar Door Chocolates, as she enjoyed another year at this event. Ferrari bubbly was being poured into flutes and Sterling Vineyards offered wine tastings.

Here are 10 Fascinating People I talked to during the preview:

1.Barbara Cassel, Governors Ball Committee Co-Chair announced the theme of the event this year is Nature’s Elegance. The cavernous room will be transformed into a mesmerizing garden to replicate al fresco dining for an elegant evening. 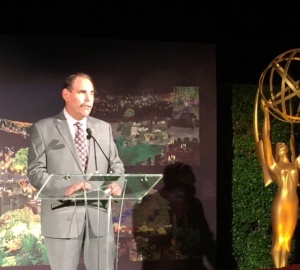 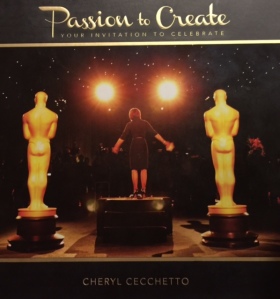 Cheryl Cecchetto knows how to put on the best parties – Emmys, Oscars, weddings, etc. Photo from her book Passion To Create.

3. The always personable Cheryl Cecchetto, Event Producer of Sequoia Productions shared with me that her favorite part of this fabulous party is when the guests step into the transformed room. “I enjoy seeing the expressions on their face as they glance around and appreciate the magic we create,” Cheryl said. 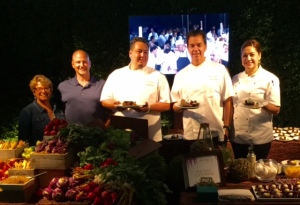 4. Joachim Splichal, Master Chef & Founder, Patina Restaurant Group was at the event, however I never had the opportunity to interview him. Instead I approached Gregg Wiele, Executive Chef of Culinary Patina Restaurant Group, Alec Lestr Executive Chef of Patina Catering and Executive Pastry Chef Frania Mendivil. This trio started planning and crafting the three-course menu the day after last years parties. Splichal told the Television Academy, “It is my honor and absolute pleasure to work with the Television Academy on this prestigious event for the 21st year.” This year Patina worked with Babe Farms in Santa Maria to plant seeds and grow a variety of produce just for this event. Here’s this year’s Patina Menu for the Governors Ball – 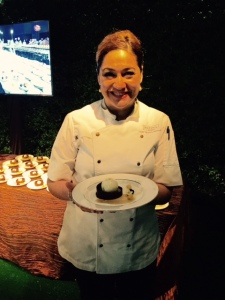 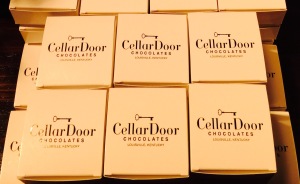 5. Erika Chavez-Graziano, the owner of Cellar Door Chocolates and her chocolate-maker Christina Keller shared with me that they have made 38,000 pieces of a variety of homemade elegant chocolates. Some of my favorites include the dark chocolate peppermint bars, raspberry truffles, milk and dark pralines. 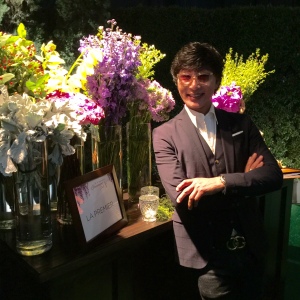 6. The stylish Kevin Lee, owner and floral designer of LA Premier told me that he has ordered 100,000 flowers from all over to provide the exquisite arrangements for the parties. He also incorporated beautiful water-wise succulent plants. Nice! Lee told me that he thanks his mom for his creative flair. He knew as a young boy that he was a creative person. “You can’t learn to be creative, it comes naturally,” said Lee. “Floral designers can arrange with technique, but you can’t be creative without flair.” 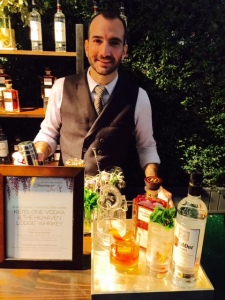 6.  The dashing Charles Joly, award-winning bartender, World Class Spirits made two drinks for the media to try. His Ketel One Moonlighter is made with Kettle One Vodka, Chamomile-Lavender syrup, fresh lemon juice, Cocchi Americano, soda water and lavender sprigs with mint. His second Emmys cocktail is an Old Fashioned made with The Hilhaven Lodge blended Straight American Whiskey, sugar cube, dashes of aromatic bitters and orange peel. 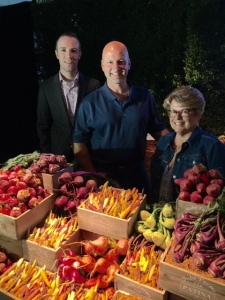 The Babe Farmers with their visual treats. Photo by Jill Weinlein

7. Both Greg and Alex of Patina introduced me to Jeff Lundberg, the President & CEO of Babé Farms in Santa Maria, CA. They partnered with Patina to plant exclusive seeds for the vegetables prepared by these esteemed chefs. Heirloom carrots, beets and fennel seeds were planted six months ago. Both chefs went up to Santa Maria to check on their Patina garden. The chefs checked on the size, quality and when to harvest 2,100 beets in colors of yellow, red and striped. They worked with the farmers on when to harvest 6,500 fennel bulbs and 27 pounds of rainbow carrots to be delivered to the Patina kitchen. Jeff told me he knew as a young boy, he always wanted to be a farmer.  While attending Cal Poly SLO, he came home to work with his mother and father on the farm. After graduation he continued working on the farm. “Santa Maria offers the ocean influences with fog in the morning, wind to bring some sunshine and fog to cool the Valley down. It’s ideal to grow fruit and vegetables,” said Jeff. “It’s important to take care of our soil, because in return it provides and takes care of out farm.”

Every winner goes home with a bottle. Photo by Jill Weinlein 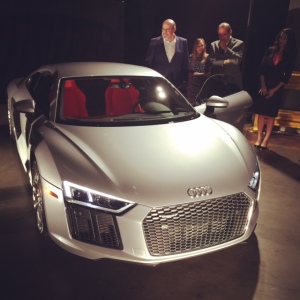 10. Walking away with a goodie bag filled with spirits, wine, brut, chocolates, a LA Premier plant and recipes to throw my own Emmy Award dinner, I stopped and looked at the eye candy of Audi R8 newest sports car – What a beauty! This year’s Emmy celebration is bigger and better than in the years past. BRAVO to everyone involved in throwing three stellar parties in Los Angeles.

Watch the Emmys Awards show on Sunday, September 18 at 7 p.m. on ABC.