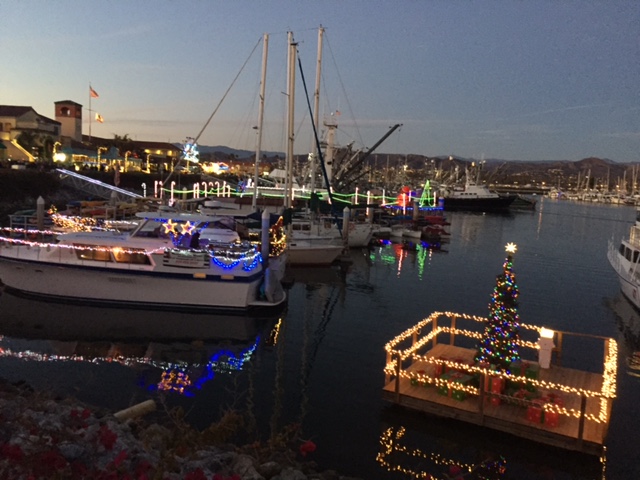 We arrived at the Ventura Harbor just as the sun was setting behind the Channel Islands into the Pacific Ocean. It was one of the best sunsets I have witnessed in a long time. The sky was a robin’s egg blue, the islands were visible and wispy clouds were above the horizon.

Across from the beach, the Ventura Harbor Village was decorated with colorful holiday lights on the roof lines of every shop and restaurant to celebrate Ventura Harbor’s Winter Wonderland & Holiday Marketplace.

In the water were sailboats with red, green, blue and white lights running up the mast to the boom and jib line. Motorboats were decked out with live Christmas trees and a band was warming up before the show at the back of a pleasure craft. Locals and tourists placed stadium chairs along the edge of the walkway to get front row seats for the boat parade and firework show.

Strolling along the paved walkway in the Village we noticed faux snow falling near the Coastal Cone shop and Rudolph the reindeer shaking hands and posing for photos with visitors. Santa and Mrs. Claus visit children and their parents at the Carousel Stage.

Victorian Carolers serenade customers outside stores filled with holiday gifts for shoppers. On the main lawn, near Island Packers office, is a Holiday Carnival complete with Ferris Wheel, Kettle Corn and a Fun House to explore from 1 to 10 p.m.

Since it was the 40th annual Parade of Lights & Fireworks, I was invited to board a decorated 64′ Island Packers Catamaran docked at the Ventura Harbor.  While enjoying an elaborate mediterranean feast prepared by The Greek (a family owned restaurant at the Ventura Harbor since 1994), we grabbed a plate and selected triangles of pita with tzatziki and hummus; chicken breast kebobs with grilled onions and peppers; Spanakopita and etheral Moussaka.

Backing away from the dock, brightly decorated boats cruised by our boat with passengers shouting out “Happy Holidays” and “Merry Christmas” to us. There were over 30 boats joining the line for a boat parade. Power boats were first followed by sailboats and dingys.

A group of judges sat on shore to admire and rate each boat on theme, creativity,  uniqueness.  Since our boat wasn’t part of the parade, we docked at the other side of the harbor and watched the parade sail by. The National Park Boat had a small volcano erupt on board. Another boat had a line of dancing flamingos.

After the parade we cruised to the Ventura Keys to see the holiday lights on the back of houses and docks. Many of the residents were having their own holiday party on their decks and shouted “Merry Christmas” to us as we cruised by to admire their light displays.

Afterwards our Captain took us out near the breakwater and cut the engine. At 8 p.m. the evening culminated with a spectacular launching of fireworks near our boat on a sandy berm. We all remarked that we have never been so close to fireworks, and it was quite a thrill.

Island Packers is cruising Dec. 19, 20, 21 and 23 on the same holiday tour through the harbor and Ventura Keys homes. While onboard it’s a party with light snacks and beverages available for purchase at the boat’s snack bar. The friendly crew members encourage guests to sing holiday carols with them during the one hour cruise. The Holiday Cruise leaves at 6:30 p.m. and returns back to shore at 7:30 p.m.

Before of after the cruise be sure to enjoy dinner near the dock at The Greek at the Ventura Harbor Village overlooking the harbor. The owners are very kind and the food is the best mediterranean cuisine in the area.

To book a holiday light cruise go to www.islandpackers.com or call (805)642-1393. Island Packers is at 1619 Spinnaker Drive, Ventura Harbor Village. 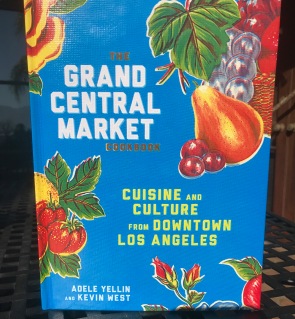