Kicking off 2017, my daughter had the opportunity to travel to Washington DC one week before the Presidential Inauguration to meet a group of people at the EPA. I asked if I could tag along with her and explore our nation’s capital while she was in her meetings. I bought two plane tickets and reserved a room for two nights at the Westin Washington D.C. Capital Center on hotwire.com for $95 a night. I was pleased with the hotel’s location between The National Mall and DuPont Circle. Click here to learn more – https://www.gpsmycity.com/gps-tour-guides/washington-dc-613.html.

Washington DC is a city one can explore by foot, metro, bicycle, rental car or Uber. I walked over 30 miles in three days, while exploring new museums, galleries and restaurants.

My journey began after we checked in, and my daughter went to her first meeting. Walking to the White House, I noticed Secret Service men standing near security fences and American flags, as bleachers were being installed in preparation for the pomp and circumstance on January 20, 2017.

Near the White House is the White House Gifts Store. Walking inside, I noticed it’s filled with Presidential memorabilia including clothing, books, hats, postcards, coins and candy. There were two areas that had Hillary Clinton Inauguration 2017 sweatshirts, chocolate bars, pins and stickers with red discounted sale tags. Nearby were racks of Donald Trump souvenirs. (701 15th Street NW (202)737-9500).

Turning onto Pennsylvania Ave., I saw a National Park sign and walked inside The White House Visitor Center. After going through security and a metal detector, I stepped into a historic building with over 90 Presidential artifacts and interactive touchscreens. There was an Ode to President John F. Kennedy display case with a bronze bust, presidential bow ties, cufflinks and photo of the 35th President. Nearby was a President Ronald Regan glass case with photos of the red and green rooms inside The White House, and glass jars filled with red, white and blue jellybeans – the President’s favorite sweet snack.

This museum offers information about how the White House was built, with some beautiful photos of the iconic building. Throughout the ground floor of the building were quotes from past presidents, including a famous one by President Franklin D. Roosevelt, “I never forget that I live in a house owned by all the American people.” 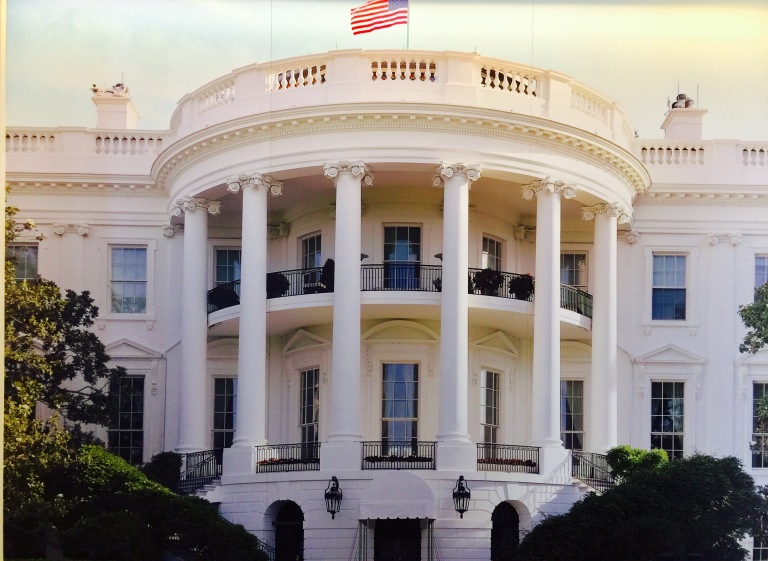 In a semi-private area, I watched a 14 minute film, “White House: Reflections From Within,” featuring fond memories of The White House by past presidents and first ladies. Before leaving I visited the gift shop and bought a few presidential souvenirs to bring home. (1450 Pennsylvania Ave. NW. The visitor center is free and open from 7:30 a.m. until 4:00 p.m. daily).

Continuing along Pennsylvania Ave., I noticed a statue of Benjamin Franklin standing in front of the old and newly restored Washington DC Old Post Office. It was built in 1899 as the city’s main post office until 1914. The beautiful building was almost torn down in 1920s and again in the 1970s while it was an office building with a food court and retail space. In 2013, the U.S. General Services Administration leased the property for 60 years to a holding company owned by Donald J. Trump. After $200 million dollars in renovations, it opened in September 2016 as the five star Trump International Hotel.

Upon entering the hotel’s main doors, I was welcomed by a few staff members, as I walked into the grand lobby reception room. With a vaulting ceiling, I admired the metal lattice work that reminded me of standing under the Eiffel Tower. The natural light from the immense skylight illuminated the conversational seating areas and BLT Prime restaurant by David Burke. The decor in this room is filled with cream, royal blue and aquamarine colors chosen by Ivanka Trump, partnering with the design firm HBA.

Guests sitting on comfortable couches and chairs have the option of selecting cheese, pastries, champagne, spirits, and charcuterie from rolling push carts. The hotel touts it offers the largest ballroom in the city, aptly called the Presidential Ballroom. (Located on the corner of Pennsylvania Avenue and 12th Street.)

Walking a few blocks over to the National Mall, I stopped inside the Smithsonian Castle to get a free guide to explore the largest museum complex anywhere. With 19 museums, galleries and the National Zoo all within a short walk or metro ride, I learned that The Smithsonian was established in 1846, and now has 138 million artifacts. There are 11 museums and galleries along The Mall between the Washington Monument and the U.S. Capitol. Admission is free to all.

I saw Judy Garland’s ruby slippers worn in the movie The Wizard of Oz, and dozens of formal gowns worn by Michelle Obama, Laura Bush, Barbara Bush, Nancy Reagan, and Jacqueline Kennedy in the National Museum of American History. 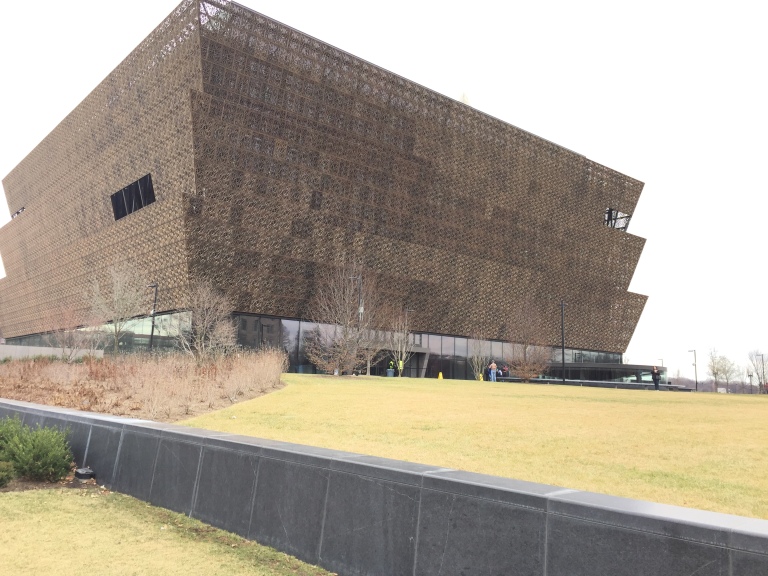 I learned that visitors need an online timed ticket to explore the newly opened National Museum of African American History and Culture. Unfortunately it was full when I went online, however on my second morning, I walked back to the museum before it opened and was approached by a couple who asked me if I needed a ticket. They had an extra ticket to give to me. I gladly took the sheet of paper and entered the 7 story building wrapped in an ornamental bronze-colored metal lattice.

Starting on the ground level, I entered a large glass elevator to take a journey from the 21st century to the 15th. As the doors opened, the area was dark with a low ceiling and shaped like a slave cargo ship. Walking through the interactive museum, I learned about slavery, segregation, life in the American South, Civil Rights, American West, Communities, Music, Sports, Politics, and Entertainment while looking at over 37,000 procured, purchased and donated historical artifacts, documents, photographs and media sharing the history and stories of people who helped build our nation.. The bottom floor offers a large cafeteria with authentic Southern cooking. One could easily spend half to a full day here. (1400 Constitution Ave., NW.)

Crossing the street we visited Civil Rights Leader Martin Luther King Jr’s monument, Franklin D. Roosevelt’s memorial with a statue of our 32nd President with his beloved dog Fala, and continued over to the Thomas Jefferson Memorial, known to be even more spectacular in the spring when the cherry blossom trees bloom along the Tidal Basin. 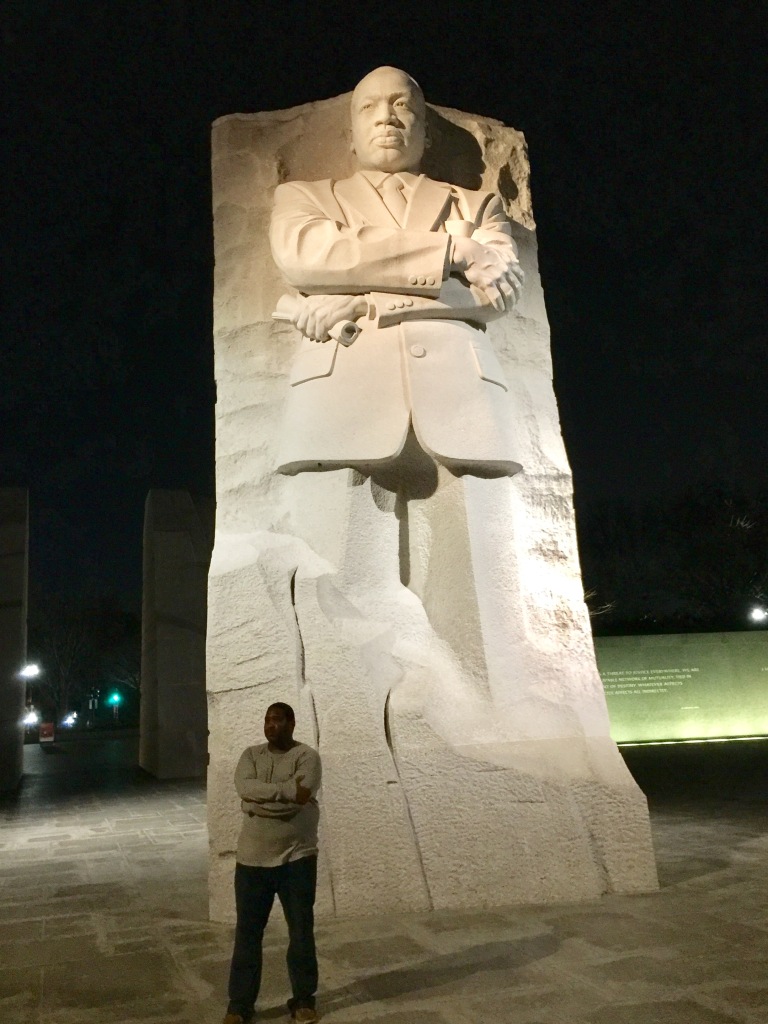 On our last day, my daughter and I visited the interior of the U.S. Capitol on a free guided tour. It started with a 13 minute film “Out of Many, One,” illustrating how Congress is formed and plays in our daily lives. Then we gathered with a guide and stood under the immense Dome. We learned how and when it was built, as we looked up at the Rotunda. Our guide introduced us to 24 of the 100 statues of Presidents and honored citizens in the old hall of the House, now the National Statuary Hall. We toured the Old Supreme Court Chambers and visited The Old Senate Chamber from 1810 to 1959.

Anyone can tour the Capitol Visitor Center, however if you would like a tour inside the building, you must get a tour pass by contacting your local Congress representative or call Visitors Services (202)226-8000. There are a limited number of passes available each day at the Information Desk in Emancipation Hall. Go early when the tours begin at 8:30 a.m. Monday through Saturday.

Dining in Washington DC there are a plethora of restaurants, cafes and fast casual spots. For a quick bite, I recommend Roti cafe and Merzi Fresh Indian Kitchen. For sit down service, I liked Del Frisco’s Grille with its full bar and interesting small plates. Those seeking a nostalgic spot, dine at Old Ebbitt Grill near The White House. Established in 1856, it was a favorite of Presidents Grant, Cleveland, Harding and Theodore Roosevelt and is still a popular meeting spot for political insiders, journalists, celebrities and theater-goers. Some celebrity chefs have opened restaurants in DC including José Andrés’s Barmini, Wolfgang Puck’s The Source and Fig & Olive.

Washington DC is a safe, clean and friendly city that offers a multitude of free museums, monuments and galleries to explore and admire. Put it on your 2017 Bucket List. To learn more about accommodations, activities and dining options, click on this link – https://washington.org.

This review was featured in the February 2017 issue of NOT BORN YESTERDAY. 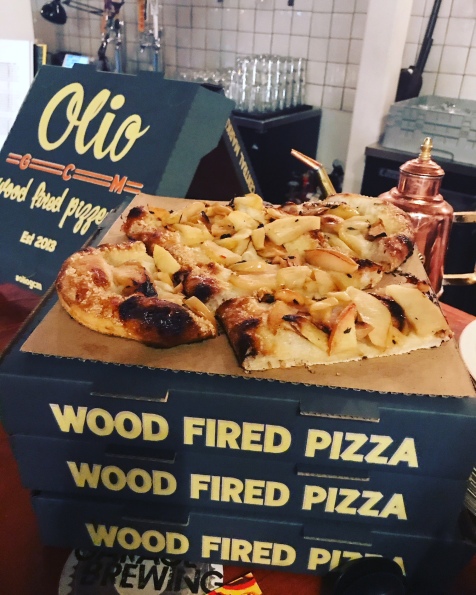