Walking into Terra Cotta located in the historic Pellissier building, next to The Wiltern Theatre, I recognized the pretty General Manager Susie Moon. She used to work at Otis and Penelope, and is now running this newly opened restaurant smoothly. 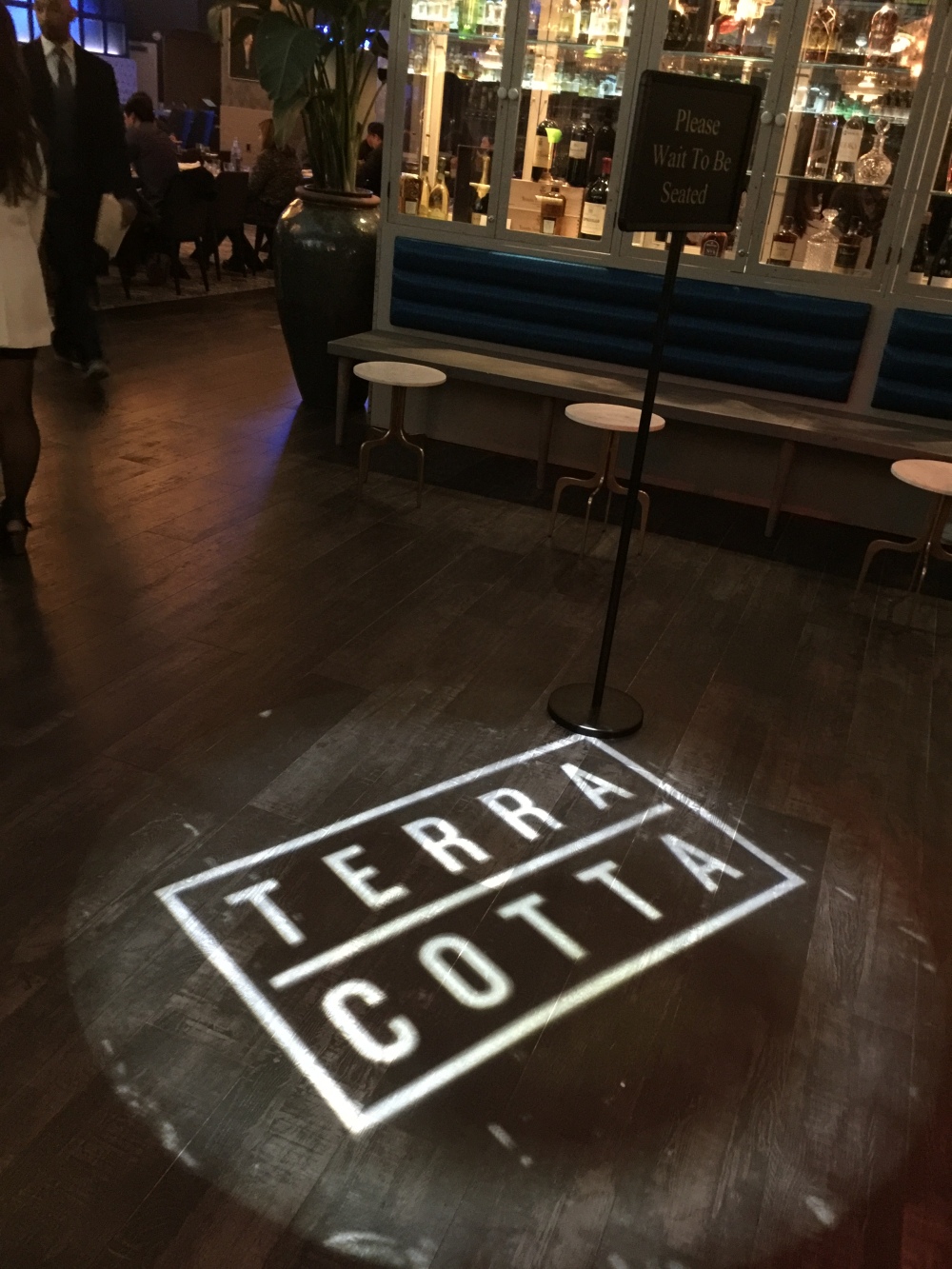 As she walked us to a table, I asked why the restaurant is named Terra Cotta? “After the signature blue-green exterior terra cotta tiles on the Wiltern Theatre,” Moon told me. “Also, in the Korean culture, we cook a lot with clay pots.” Even though this is located in K Town, near Wilshire Blvd. and Western, it’s not a typical Korean restaurant, its much more global.

As we sat down, I admired the visually stunning room with multiple touches of glamour. The tall exposed white ceilings has 10 elegant chandeliers hanging down. The restaurant was designed by Sean Knibb of Knibb Design offering three coveted large tufted black booths, and gold detailing throughout the room. The dark grey walls compliment the ceramic Spanish-motif tiles, wood flooring and textural Venetian plaster columns. At the top of these columns are speakers pulsating club-style music into the lively room.
Opened in November 2016, the restaurant is attracting groups of young women and couples on dates. Others gather to socialize, drink and dine at communal tables before a night of karaoke or seeing a show at The Wiltern.

Our sweet server Juliette welcomed us and said, “The cocktails are King here and our bar offers 46 different whiskeys.” She recommended one of her favorite cocktails named Ginger Rodriguez, so I ordered it. It’s made with mezcal, averna, ginger lemon and nutmeg. One sip and my tongue tingled with the strong, yet smooth flavors. The enormous ice cube in the glass prevented a fast dilution of the earthy flavors. This drink was created by cocktail designer and beverage manager Michael Nemčik. He is a respected sommelier, wine director and mixologist having worked at various restaurants in Los Angeles that include Osteria Mozza and Terroni.

My husband started with a glass of 2015 Elena Walch Schiava, a good value compared to many other restaurants in LA. We learned that it is one of Michael’s favorite ruby colored wine with a delicate hint of cherry on the nose and an almond flavor on the finish.
Looking at the menu, Juliet told us that the Executive chef Danny Ye used to be at Nobu NYC. He creates a menu that not only offers Korean elements, but also Japanese, and Latin American influences in his dishes.

We started with a plate of Korean fried cauliflower – a popular dish that appears on almost every table. Cauliflower florets are flash fried in a light batter and doused with a red cho-kochujan sauce to offer a slightly tangy and uniquely spicy-sweet red chili pepper essence. There is a little heat to this dish topped with sesame seeds.

Next we shared the signature and delicate toro tataki. Tataki is a Japanese preparation for uncooked fish by pounding it thin. Chef Ye arranges the fish on a plate to look like flower petals, before garnishing it with with a truffled amazu ponsu, avocado and curled shitake mushrooms.

Another crowd pleaser at nearby tables was the squid ink fried rice served in an elegant black skillet. We ordered one, and realized this colorful dish could easily be shared with two to four diners as a meal. It’s loaded with dark black kimchee and garlic fried rice colored with squid ink and topped with dayboat seared scallops. Small opened clams were next to eight Argentinian prawns staring up at us. The prawns were still in their hard shell, yet easy to slip off to reveal their succulent and sweet white meat. This is similar to a Latin American paella.

Michael came to our table with two glasses of 2015 Suavia Soave Classico to pair with the saltiness of the seafood dish. It was an excellent crisp and bright white wine offering the aromas of pear and almond with an apple finish. This wine was also a good value. 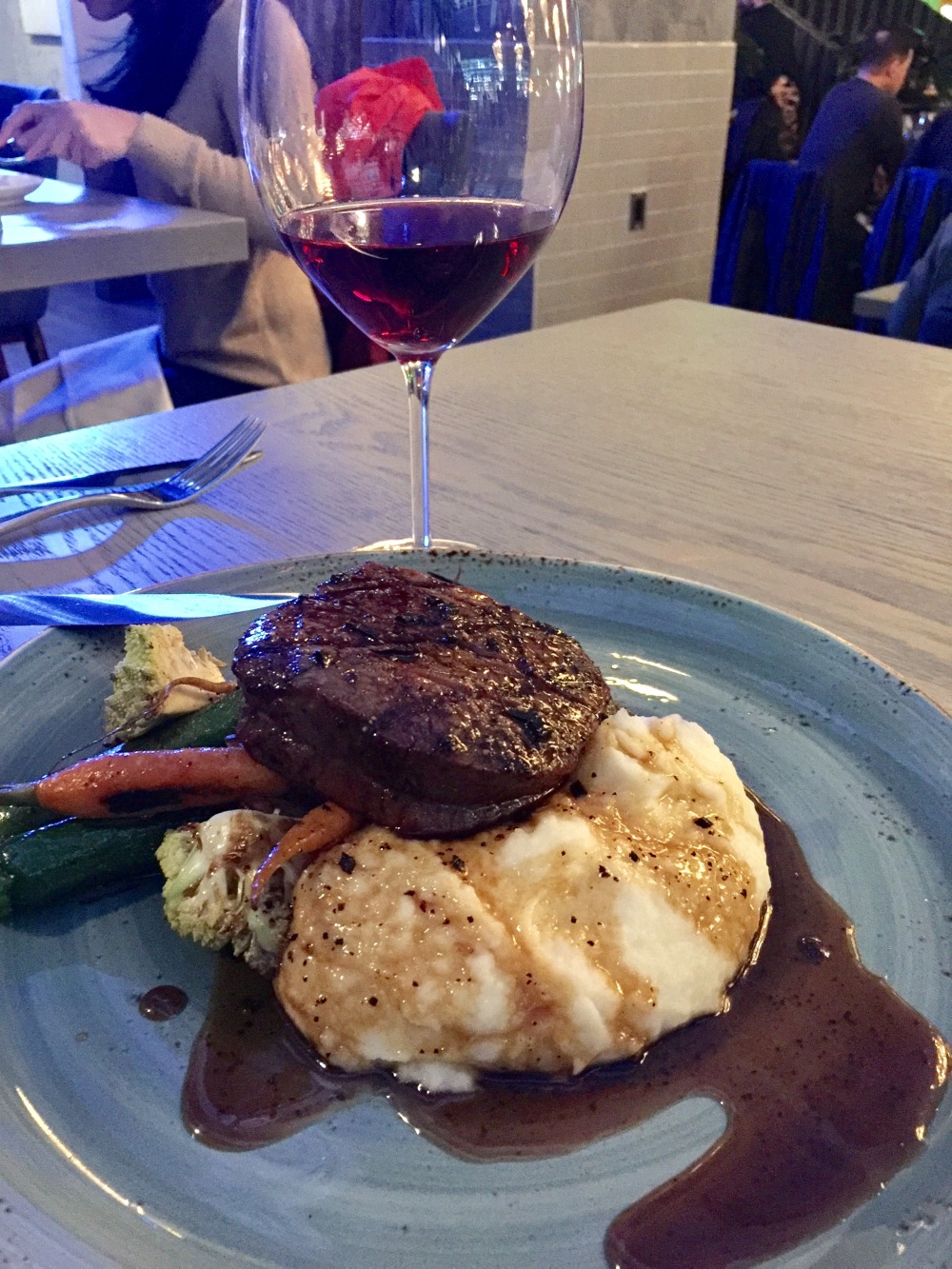 We finished with surf-and-turf experience with a piece of Australian wagyu filet mignon dazzled with a white truffle soy-mirin sauce. It’s served with mashed potatoes and a colorful array of seasonal vegetables. Next arrived a plate of Scottish salmon with a drizzle of miso butter with a side of roasted Brussels spouts that were enhanced with flavorful sliced chorizo.

Watching servers bring plates of roasted chicken to other tables, we inquired with Juliet about the dish. She said it was chef Ye’s spatchcock chicken that he roasts and fries to create a crispy and crackly skin. The chicken is served with ramekins of aji verde salsa, aji amarillo mayo and pickled white radish, called Korean Moo. It’s also known as daikon or Chinese white radish. We made a note to try it on our next visit.

Pastry chef Jason Licker makes five exquisite treats that include a rich, thin puff pastry filled with green matcha buttercream and assembled into a mille-feuille. It arrived with a scoop of tropical coconut ice cream. Known for winning the title of Iron Chef Thailand in 2014, Licker makes a K – Pop made with frozen chocolate cream with banana-caramel and rolled in chocolate crunch, offering a perfect balance of flavors, textures and temperatures.

This review was featured in the February 2, 2017 Beverly Press and Park LaBrea News – http://beverlypress.com/2017/02/terra-cotta-global-cuisine-in-koreatown/