Walking into the smaller Audrey Skirball Kenis Theater inside the Geffen Playhouse, I admired Peter Hickok’s set for The Cake. It was so detailed that I thought I was walking into a soundstage to watch a taping of the Cake Wars baking show. The Tiffany blue walls and bright pink bakery counter were pleasing to the eye, and the two bedrooms on either side of the bakery lent an air of intrigue.

Remember last year’s news when Jack Phillips, owner of Masterpiece Cake in Denver, refused to bake a same-sex wedding cake because it violated his religious beliefs? Well, playwright, Bekah Brunstetter takes on this legal case and changes the plot and characters. Instead of the actual story about a male baker and two men seeking a wedding cake, Brunstetter writes about a female conservative, racist, homophobic, and devout Christian baker named Della (Debra Jo Rupp) refusal to bake a wedding cake for her best friend’s daughter’s gay wedding. 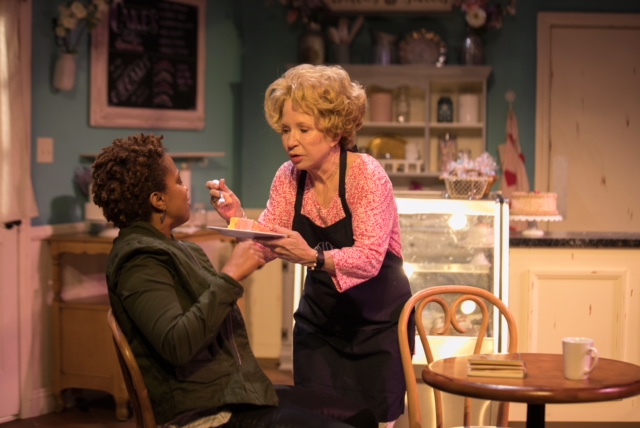 Jennifer Chambers first directed this play at its world premiere at The Echo Theater Company with Rupp originating the role of Della. It’s sweet and funny at times, in fact, I was relieved to be laughing, due to the seriousness of the subject manner. However, the play crumbles a times with it’s pacing, and silly semi-naked food scenes.

The liberal audience in Los Angeles may not like narrow-minded Della but will hang on to hear every word recited by Rupp. Her vulnerability, enthusiastic clapping hands, mannerisms, and facial expressions are so believable as a Southern woman so sweet, that if you cut her open, she is “probably filled with jelly beans.”

Della obediently follows the directions of each recipe, just as she obeys each line in the bible. When the engaged couple Jen (Shannon Lucio) and Macy (Carolyn Ratteray) come back to Jen’s hometown to prepare for their wedding, chaos begins. When Jen’s mom died, she left her daughter money for a dream wedding, and Jen wants one of Della’s delicious cakes.

Macy from big and diverse Brooklyn is a progressive Y generation woman, who could care less about a big wedding. In fact, she would instead use the money to take an extended honeymoon with Jen to India. When Macy comes into Della’s bakery, we immediately learn she is rigid in her thoughts too. She believes sugar is more addicting than cocaine and refuses to take a bite of cake Della lovingly made. Macy drinking from a stainless steel reusable water bottle favors gluten-free food. Poetic Della describes a gluten-free cake “tastes like the back of my mouth after a good cry.”

A first I thought the fantasy scenes spotlighting Della as she listens and talks to British judge from the Great American Baking Show (voice by Morrison Keddie) was clever, and I liked how lighting designer Pablo Santiago enhanced these scenes with his illumination, however as Keddie starting criticizing Della on more than her baking skills, and crudely attacks her verbally, these scenes get a little too odd for me.

Both Lucio and Ratteray originated their roles in the world premiere of The Cake at the Echo Theater Company and seem at ease and have chemistry with each other. Both are engaging and fun to watch. Be aware there is a pretty heavy petting scene between Macy and Jen and some partial nudity in the show.

When Della discusses her dilemma about making the wedding cake for Jen, Tim reminds Della “You can’t pick and choose the Bible, that makes the edges blur.”

Della’s brain and heart are at war.

Macy’s published article about Della bigotry is read by someone at The Great America Baking Show, dashing her dream of a new life. Discouraged, she decides to spice up her marriage with buttercream (an odd scene), and later her husband wearing mashed potatoes was even wackier.

In an interview inside the Playbill, Brunstetter mentions how she has struggled with her parents on their views on gay marriage. Writing this play helped her release the “toxic stuff” that had been building up in her brain that she has been yearning to release. When Obama was in power, she thought her parents were the only narrow-minded people on earth. Then when Trump became a nominee and President, she realized how many homophobic people there are in the world. She addresses this in her poignant story that is very relevant today.

This review is featured OnStage Blog The Cake