When Citizen opened about two years ago next to Spago on Canon Drive, I enjoyed the creative food, kitschy decor and more reasonable prices than many of the other restaurants along the street.

When my husband and I returned to Citizen for dinner last month, we noticed they still have the macrame wall coverings and lively music playlist, as we were led to a semi circular booth next to an artfully designed brick side wall. 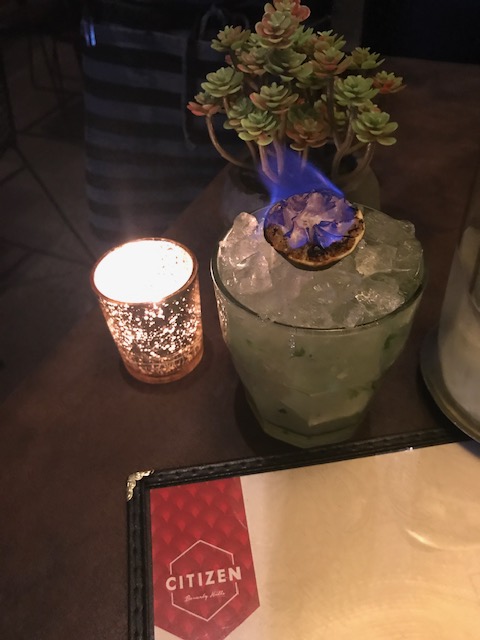 Chef Seth is a LA native with years of experience cooking in Michelin-starred restaurants, that include L’Orangerie in Los Angeles and Cuisine Francais in Chicago, as well as Dakota Restaurant in the Roosevelt Hotel and The Penthouse at the Huntley Hotel in Santa Monica.

Our server Michael told us that preparing the watermelon salad, chef Seth bathes the cucumbers is an herb vinaigrette and vacuum seals them to marinate all the flavors. When the salad arrived at our table, there were brightly colored cubes of red and yellow watermelon and chunks of the delightful pickled cucumbers. They were spiked with an essence of vinegar and herbs. Also on the salad were small heirloom tomatoes sliced in half and a few shakes of chili powder to give this refreshing starter a touch of tingle to ones tongue. 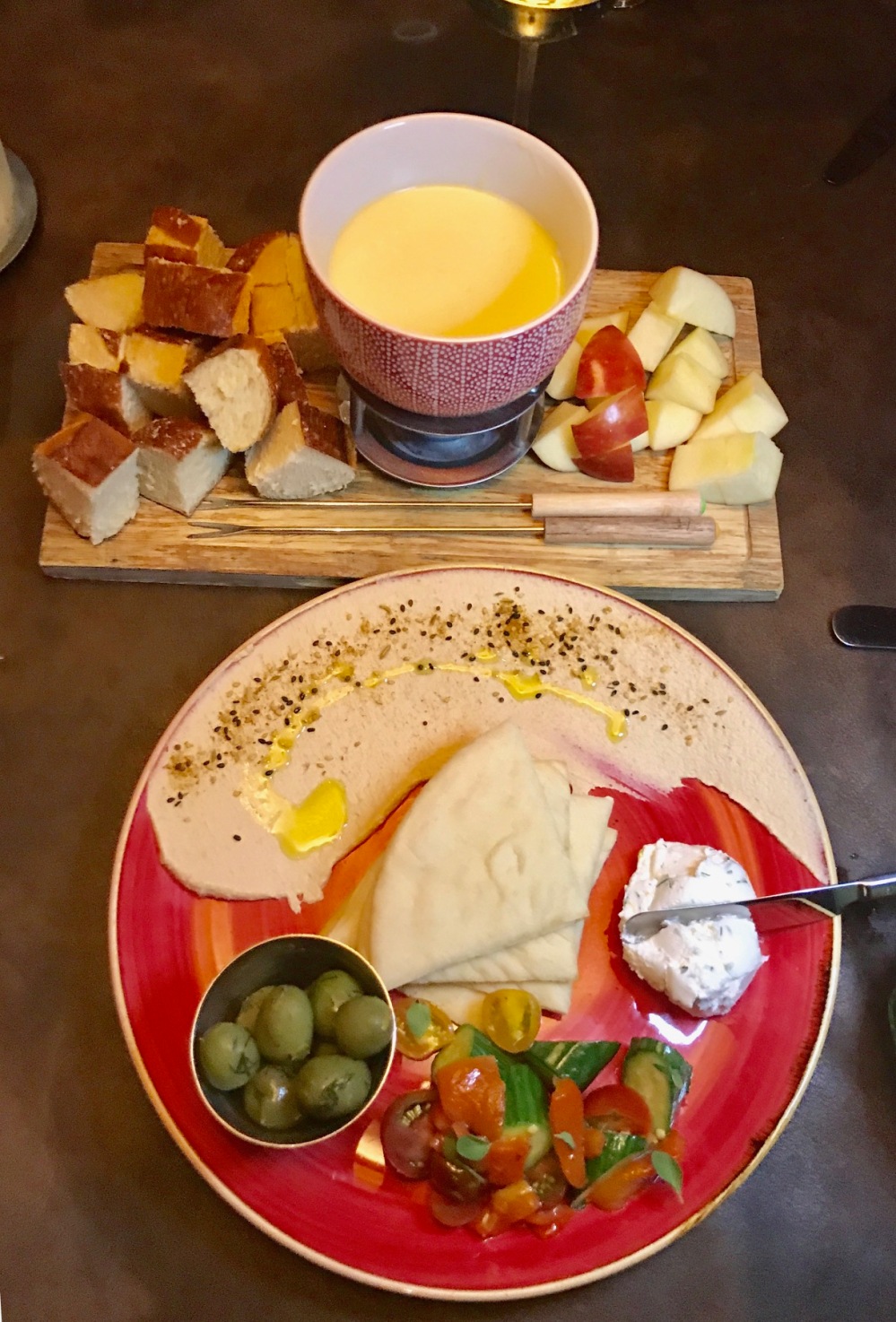 The fondue arrived on a wood plank with a low flaming warming pot filled with a luscious light yellow cheese dip. There were two skewers to pierce big pieces of pretzel bread and apple bites. The smooth cheese sauce was a pleasing combination of Swiss, Gruyere and Emmental offering a savory sweetness when dipped with the apple and touch of saltiness with the pretzel bread.

Looking over the cocktail menu, we ordered a margarita style drink named Porcupine. Made with serrano infused tequila, citrus agave, lime, basil, and cucumber, the bartender added a slice of citrus doused in alcohol and ignited it for a flaming presentation. The dining room grew quieter as the cocktail was paraded from the bar to our table.

Citizen features #Cocktailforacause where guests can order the cocktail of the month and 50% of the price will be given to a charity.

Next we ordered the mezze plate with a large smear of hummus, dill labneh (a Greek yogurt similar to a cream cheese), marinated cucumber salad and warm pita triangles.

While listening to 70s music (Rolling Stones, Styx, Tom Petty) Michael recommended a few of the chef’s most popular dishes – the steak and noodle salad, halibut in parchment paper, grilled pork chop, brick pressed chicken and a trio of tacos. We decided to order the first two he recited.

The steak and noodle bowl offered a fusion of Thai flavors with slices of perfectly grilled flat iron steak mixed with long noodles, julienne of jicama and carrots, chopped Thai basil, mint, a little coconut, chopped peanuts, candied ginger and sweet chili dressing. This is a dish I would order again on my next visit.

The halibut entree is a presentation when delivered to the table. Michael placed the plate in front of me and cut open the parchment, releasing steam up to the ceiling. The mild white fish was cooked with local veggies and potatoes. There was a silver container of dill butter sauce that I could pour as much as I wanted onto the fish and vegetables the  plate.

Citizen has an efficient staff serving fun and creative food to locals and visitors in Beverly Hills. They say if visit often you become a citizen here.

This review was also featured in the Beverly Press .