Walking up to the front of the Hollywood Pantages Theatre, I noticed a sparkly tiara and bouquet of red roses with petals scattered around Carol Channing’s star. Channing who passed away on January 15, 2019 was the quintessential Dolly Gallagher Levi in the musical “Hello, Dolly!” She brought Dolly to life over 5,000 times. 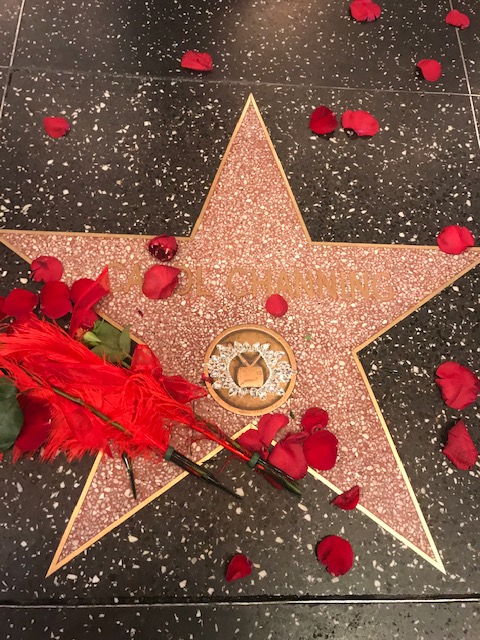 I remember seeing the Tony Award winning actress perform the role at the Hollywood Pantages when I was a young girl. About seven years ago, I saw her again dining with friends at Culina inside the Four Seasons Beverly Hills. She received the same adoration from the servers at the restaurant, as she did onstage.

Other stars have performed the role including Bette Midler and Bernadette Peters, and now Broadway legend Betty Buckley is the lovable matchmaker who has a business card for every specialty.

Around the same time that I saw Channing perform the role of Dolly, I was watching Buckley on television as the beloved stepmom Abby Bradford on the television show Eight Is Enough. 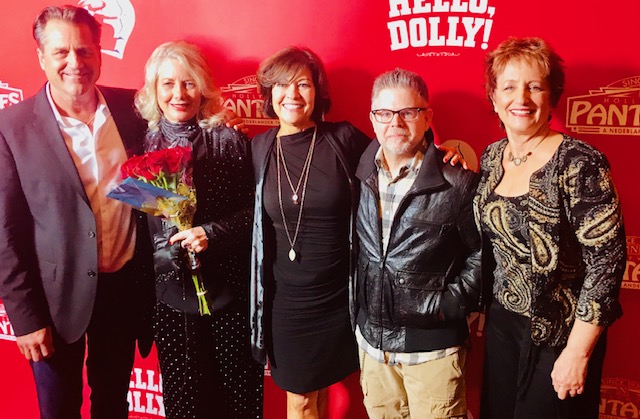 Standing next to the red carpet on Opening Night, I was warmed to see Abby Bradford’s “stepkids,” now all grown up, walk down the carpet showing their support. Connie Needham, Laurie Walters, Adam Rich, Dianne Kay, and Jimmy Van Patten brought a bouquet of flowers to present to Buckley after her performance.

The show starts with a kaleidoscope of colorful lighting by six-time Tony Award winner Natasha Katz (Lighting Design), and costumes by four-time Tony Award winner Santo Loquasto (Scenic & Costume Design). The Jewel and rainbow sherbet hues dazzle the stage, especially during “Put on Your Sunday Clothes” and “Before the Parade Passes By.” This cast is one of the best dressed ever.

Buckley is a natural in this role. She may not be as overly wide-eyed expressive, and her singing voice isn’t as over-the-top distinctive as Channing, instead it’s easier on the ears. When Buckley appears in her gorgeous red floor-length dress and gracefully saunters down the grand stairway, she delivers her lines and sings so passionately that the audience applauds and even rises to give her a standing ovation, before the show is over.

Other stand out performances include Dolly’s tight-fisted, soon to be paramour Horace Vandergelder (Lewis J. Stadlen). Stadlen’s comic timing is flawless and fun to watch. I was mesmerized with the Vandergelder’s Hay and Feed Store set, especially when Stadlen sings the catchy tune “It Takes a Woman” with the all-male Instant Glee Club. This barbershop genre song has the ensemble of men popping out of boxes and magically appearing on the multi-level detailed set.

I laughed out loud often watching Cornelius Hack (Nic Rouleau) and his partner in crime Barnaby Tucker (Jess LeProtto). Both these actors have perfect timing in their antics and facial expressions throughout the show.

Other show-stoppers include the adorably shy Minnie Ray (Kristen Hahn) who blossoms while falling more in love with Barnaby, and hat shop owner Irene Molloy (Analisa Leaming) singing in a beautiful Broadway-style soprano voice “Ribbons Down My Back.”

Two impressive props include the life-size horse and trolley in the beginning number “I Put My Hand In” and the steam locomotive at The Yonkers Depot.

Jerry Herman’s other memorable lyrics include “So Long, Dearie”, “Before The Parade Passes By” (Buckley had tears in her eyes), and of course “Hello Dolly!”  These songs were so popular in the 1960s, that the original cast album was No. 1 on the Billboard Pop Albums chart for seven weeks.

Choreographer Warren Carlyle’s “The Waiters’ Gallop” reminded me of Disney’s “Be Our Guest” with a twirling array of formally dressed waiters swaying, jumping and rolling while holding silver trays of food.

The final scenes offer a healthy dose of slapstick comedy, especially when the Keystone style cops chase others around the set.

There is never a dull moment in this entertaining Golden Musical filled with humor, love and comedic excellence that will have you rise from your seat in exuberant applause.

HELLO, DOLLY! is at the HOLLYWOOD PANTAGES THEATRE for 3 weeks only, now through February 17, 2019. Tickets for “HELLO, DOLLY! are now on sale, and available at http://www.HollywoodPantages.com/HelloDolly and http://www.Ticketmaster.com, by phone at (800) 982-2787 or in person at the Hollywood Pantages Theatre Box Office (Opens daily at 10am).

The performance schedule for HELLO, DOLLY! is Tuesday through Friday at 8pm, Saturday at 2pm & 8pm, and Sunday at 1pm & 6:30pm. Opening Night is Wednesday, January 30th at 8pm.

HELLO, DOLLY! is recommended for all ages. Children under 5 will not be admitted to the theatre. Individual tickets for HELLO, DOLLY! start at $35. Prices are subject to change without notice. A complete list of cities and dates for the national tour of HELLO, DOLLY! can be found at http://www.HelloDollyOnBroadway.com.

This review was featured in OnStage Blog .