Las Vegas has become the entertainment capital of the world and Jabbawockeez at MGM Grand is a one of the most mesmerizing shows for all ages. Named “Best Family Show” and “Best All Ages Show” for three years in a row, Jabbawockeez was the first dance crew to headline a show in Las Vegas.

The original group was invited to perform in Vegas, after their inspiring and winning performances on the first season on “America’s Best Dance Crew,” earning them $100,000.

Located on the casino floor in a smaller and more intimate theatre, ticket holders can purchase popcorn and a beverage to enjoy at their seat while watching one of the world’s most influential dance crews. The all male, hip-hop squad provides a foot taping, music pulsating dance show that will have you laughing out loud.

What makes this show unique is their white masks displaying no facial emotion. The characters express their feelings through clever choreography and special effects.

The uplifting show is about a character named PJ who lives a monotonous life at home and at his office. Putting on his pajamas, he falls asleep and is guided in a ‘“dream-like” sequence to enter the Jabbawockeez lifestyle. This introduction has PJ explore his masculinity and wakes him up as he tries to participate in their gravity-defying moves.

These dancing characters are likable, energetic and lead PJ on a new way of looking and loving life. The initial members and new dance crew work well as a team. They choreograph their performances and choose the own music. Audience members will recognize most of the funk, rap and pop songs including Michael Jackson song “Pretty Young Thing”, Queen’s “Bohemian Rhapsody”, Sting’s “Englishman in New York” Eagles “Hotel California.”

The dancers perform handstands and flips across the stage inspiring the audience to clap and jump up on their feet. During each show, someone from the cast will come down into the audience to select a theatre patron to participate up on the stage. The humorous “proposal” scene had me clapping, and laughing so hard that tears streamed down my face.

The lights and costumes add to the excitement of the show, especially the black light display, and the neon orange and black jumpsuits. Projections on the curtains include geometric and pyramid shapes by laser beams

Waking up from his dream, the dancers “Hit it out of the park,” with the moral of the show “I can only show you the door, you have to walk through it.”

For an extra special experience, the show offers meet and greet tickets to go backstage and meet three of the performers, see their wardrobe, props and take photos. Tickets must be purchased along with your tickets. This show is appropriate for young and old. Ages 4 and older can be admitted as a lap seat.

My review of Jabbawockeez is also featured in OnStage. 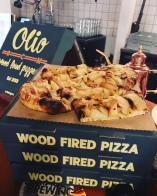