Olympic gold medalist Simone Biles christen Celebrity Cruises’ newest ship, Celebrity Beyond when it docked in Fort Lauderdale, Florida last month on Nov. 4, 2022. CEO and President of Celebrity Cruises Lisa Lutoff-Perlo and American Captain Kate McCue, were onboard to welcome the Olympic winner and Godmother of the ship. Biles was present at the the naming ceremony of the  biggest and brightest cruise ship in the Celebrity Cruise fleet.

In a statement Biles said, “I have a lot of great memories of cruising with my parents while growing up, so I am beyond excited to serve as godmother of Celebrity Beyond.” Biles is honored to join such a distinguished group of game-changing women. 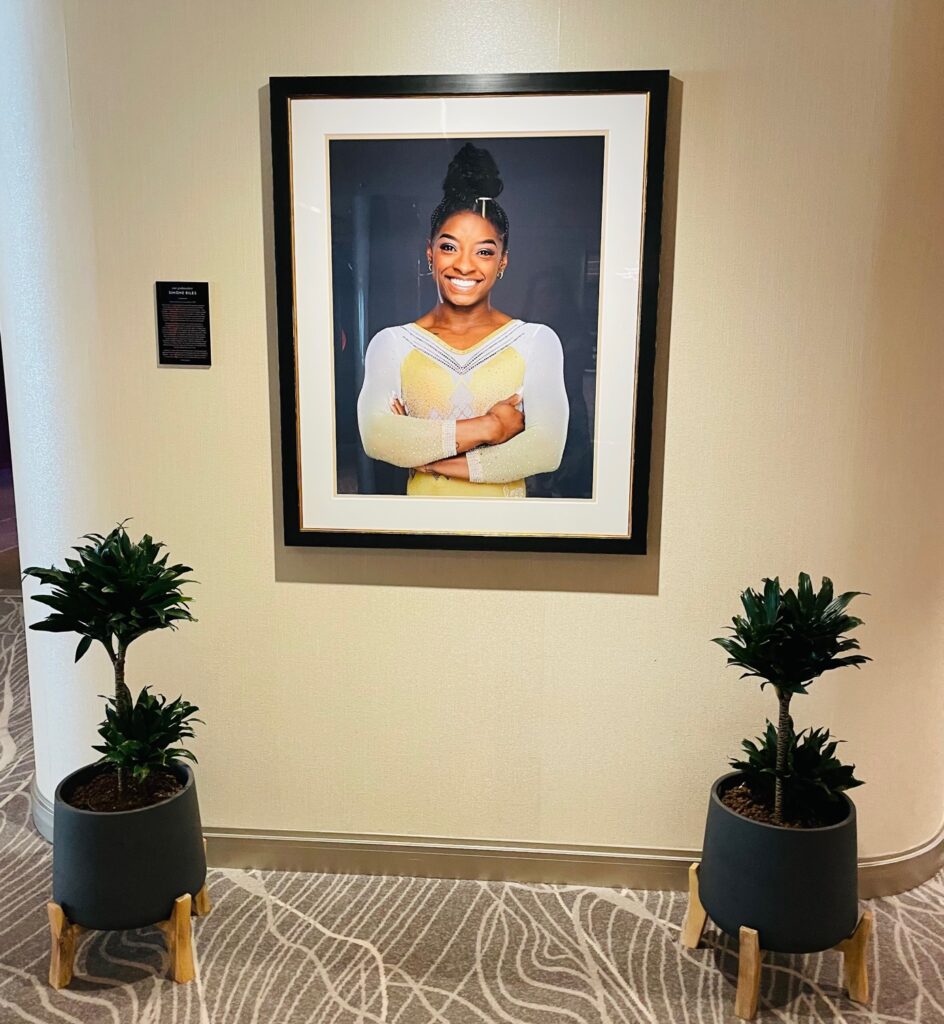 The game changing women who are revolutionizing the maritime cruise industry are Lisa and Captain Kate. During an informational meeting inside the theatre of the Celebrity Beyond, Lisa shared a story of how she met Captain Kate. “There were three or four women out of 100 at a conference for Hotel Operations and Captains,” shared Lisa. “I remember Captain Kate shared how she continually was passed up for becoming the Captain of a large ship. She told me by the time she turned 40 years old, she wanted to achieve that goal.” Captain Kate has a mantra – “If you can see it, you can believe it.” 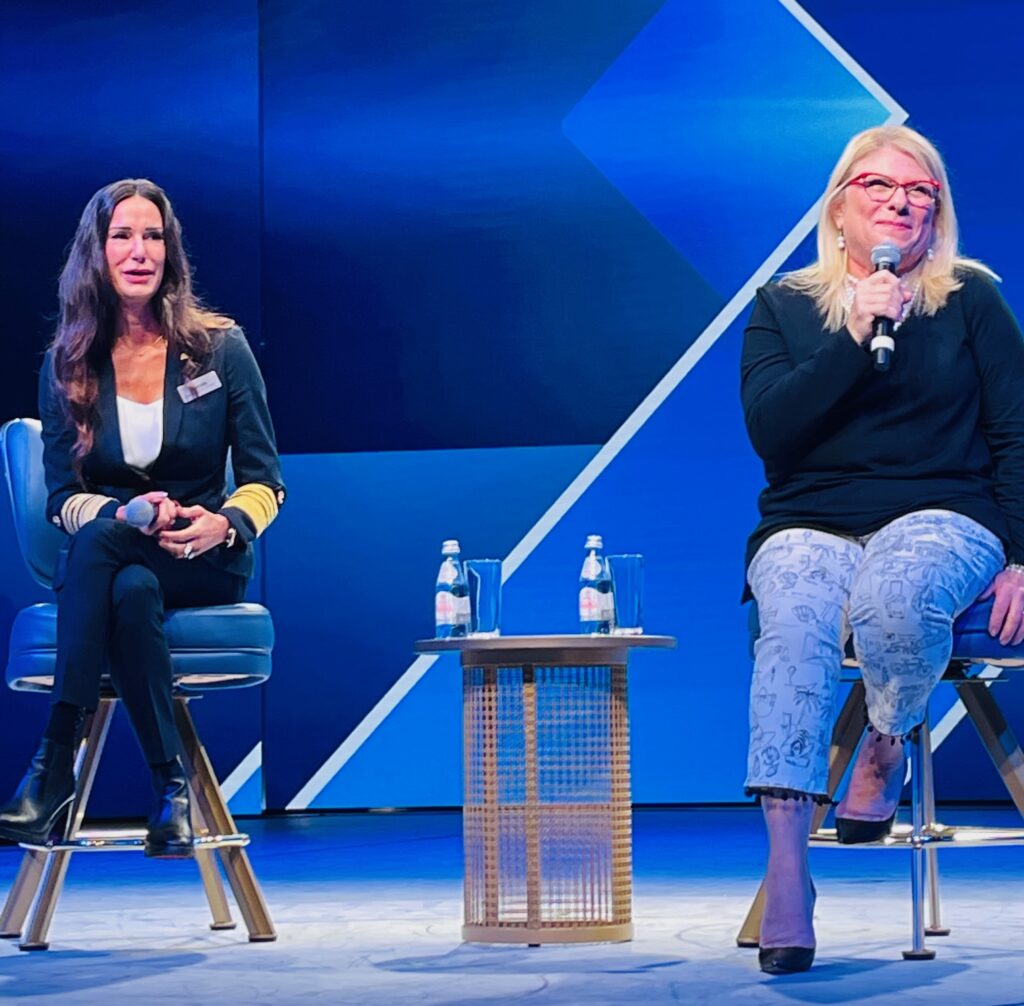 When Lisa took the helm as President and CEO at Celebrity Cruises in 2014, she was the first woman to lead one of the Royal Caribbean Group’s cruise line brands. She remembered what Kate had told her, and wanted Kate be a Captain on her luxury ships. She wanted to make a mark on the cruise industry, changing the role of women in the industry. She started hiring more women of all ages, nationalities and religions, and within her first year as President and CEO, she revolutionized the cruise industry when she asked Captain Kate to be Captain. Kate was able to achieve her goal at the age of 37 years old. “You will have a platform to be a rockstar,” Lisa said to Captain Kate.

During the pandemic, Captain Kate did became a rock star on social media acquiring over 4 million followers. Fans follow her digital photo album of what life is like at sea as a female captain with a hairless cat named Bug Naked. “It was pivotal during the pandemic to connect to guests and crew members,” said Captain Kate. “Social Media is also a great way to get people excited to get into the industry.”

Recently Captain Kate became the first female captain to take a cruise ship, the Celebrity Beyond, out of its shipyard for her first maiden voyage. She is in charge of 75 different nationalities who give the best service to passengers. “The crew gives the ship its heart and soul,” said Captain Kate. 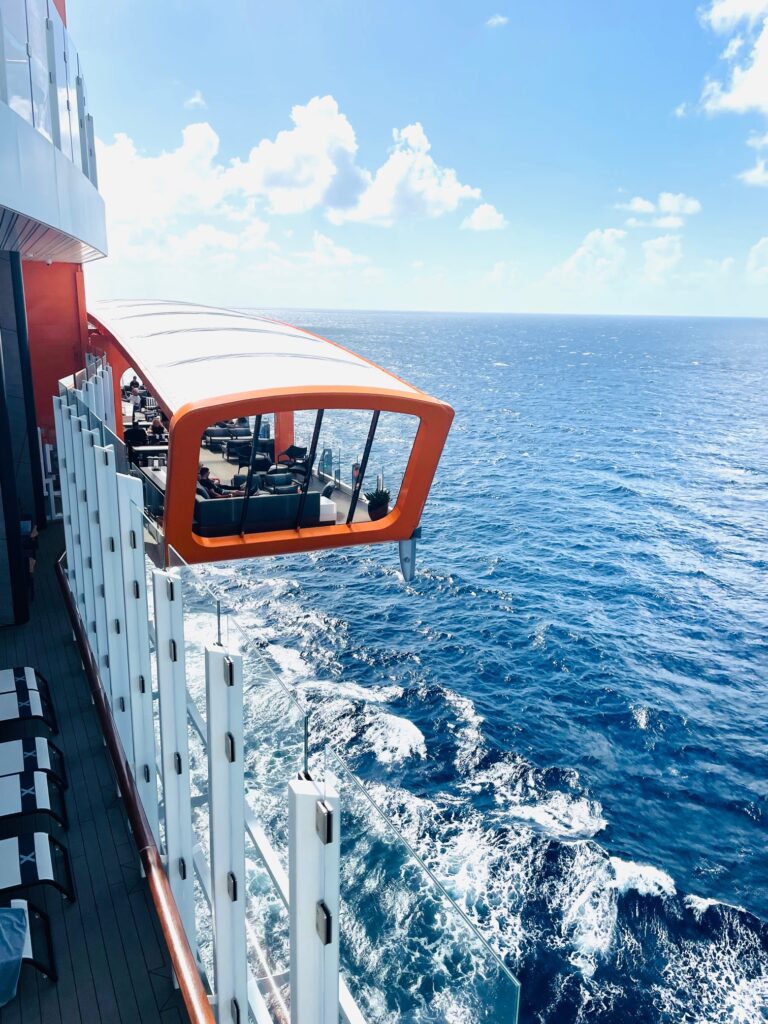 LESS OF A FOOTPRINT

The Celebrity Beyond is 20% more efficient from her bow to the stern. She can plug into Shore Power to reduce in port emissions to near zero with connectivity. The ship is equipped to use power from the local electrical grid while docked at port, instead of burning fuel. This  eliminates a carbon footprint. The ship uses ZERO single use plastic, and offers reusable larger bottle bath amenities in the cabins. All crew members are trained in waste reduction, and they have achieved a 90% reduction in the use of plastic. The fleet boasts state-of-the-art facilities, complete with shredders, bailers and compactors that allow the ships to divert 100% waste from a landfill where port facilities permit. With its own waste water purification system, the ship can make its own water onboard. This allows clean water to be put back in the ocean. 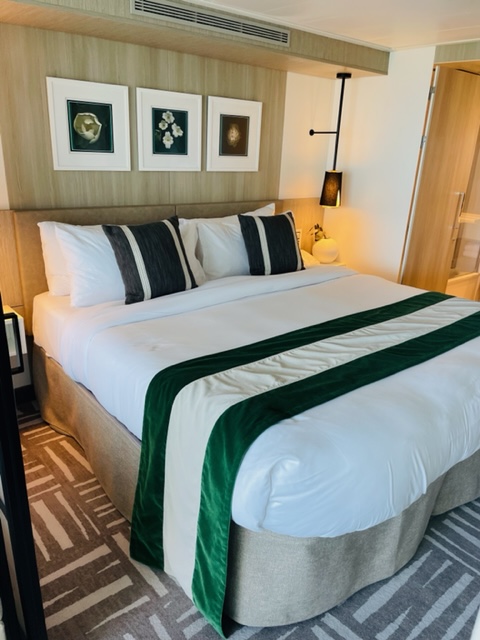 The Celebrity Beyond Cashmere mattress. Photo by Jill Weinlein

Staterooms are more energy efficient with the new in-room automation that allows passengers to adjust everything from the shades, lighting and AC with the tap of a screen. The ship uses longer lasting fluorescent and Light Emitting Diode (LED) lights, which require 80% less energy, and generate 50% less heat. This reduces energy consumption and contributes to more efficient air conditioning due to the cooler bulbs.

The Celebrity Beyond is the first vessel in the fleet to offer passengers access to Elon Musk’s Starlink Internet at sea. It will give passengers the same type of service that they have at home. The new technology gives travelers in remote locations better access to the internet.

For 2023 the Celebrity Beyond is sailing throughout the world. From the Caribbean to Italy, Turkey and Greek Islands, there is a cruise waiting to take you for a journey that is wonderful.

This review was featured in Luxe Beat Magazine in November 2022.